Expanding the Data Discovery Legal Year in Review for 2018 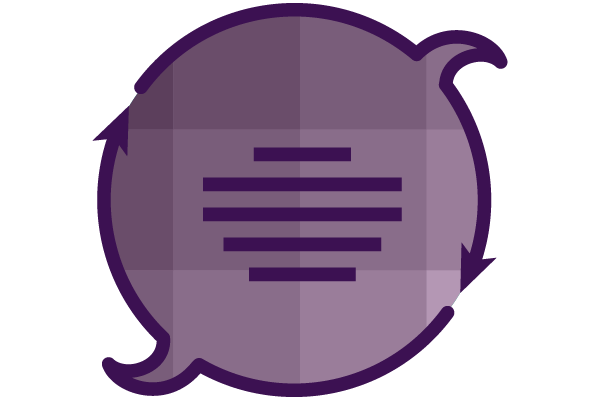 For the fourth consecutive year, we’re about to publish our annual Data Discovery Year in Review. In the foreword to our first edition in 2015, we outlined our mission for the Year in Review:

This is not designed to be a comprehensive collection of the year’s e-discovery case law. Instead, our goal is to provide a quick, easy-to-read, hopefully entertaining, and—most importantly—useful compendium of the year’s interesting cases for the e-discovery professional and those who wish to learn about this increasingly important area of the law.

We’ve received feedback that the Year in Review has been a helpful resource over the years. So why did we tweak the name?

Simple: in 2018, some of the biggest data discovery legal developments were not legal cases.

For instance, U.S. President Donald Trump signed into law the Clarifying Lawful Overseas Use of Data (CLOUD) Act on March 23. After years of sometimes contentious negotiations, Europe’s General Data Protection Regulation (GDPR) went into effect on May 25, and California Governor Jerry Brown signed into law the California Consumer Privacy Act (CCPA) on June 28—although the law does not take effect until January 1, 2020.

As is tradition, we’re having a legal education webinar to discuss the Data Discovery Legal Year in Review. This year, it’s a Law.com, CLE-accredited webinar taking place next Thursday, December 13, at 1:00 p.m. Central time, and the annual Year in Review e-book comes to you in January.

For the webinar, we’ll be joined by U.S. Magistrate Judge Patricia D. Barksdale (M.D. Fla.) and retired U.S. Magistrate Judge James C. Francis IV, who serves as Distinguished Lecturer at the City University of New York School of Law. We’re honored to have the judges providing expert analysis of the year in data law.

For our annual look back at the year in data discovery law, we’ll discuss case law from across the nation and the globe, but, as noted above, we’ll also include legislative and regulatory developments, expanding our coverage somewhat. To give you some background on how we got here, a look back at our previous publications is helpful. 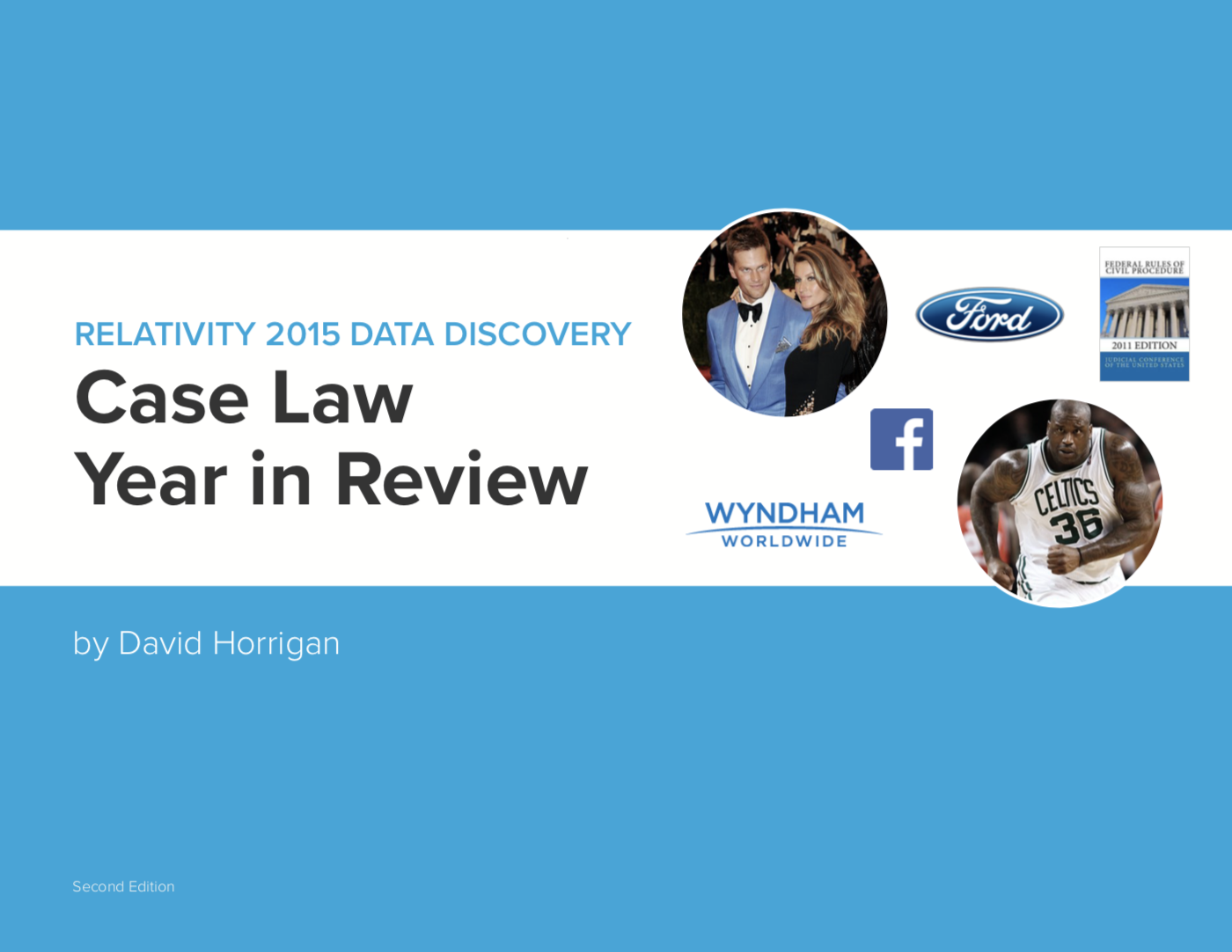 As we published our inaugural edition of the Year in Review, the 2015 e-discovery amendments to the Federal Rules of Civil Procedure loomed large. We noted that we chose cases that might see different treatment under the new rules, which took effect on December 1, 2015.

Among the popular cases we covered in 2015 were Tom Brady, Giselle Bundchen, the NFL, and the mobile phone spoliation tales of Deflategate; NBA star Shaquille O’Neal’s social media misadventures; Ireland approving technology-assisted review (TAR) in Quinn; data breach enforcement actions by the FTC; and e-discovery getting law firms into trouble.

You can download your copy of the 2015 Data Discovery Case Law Year in Review here.

2016: The First Full Year Under the New Rules 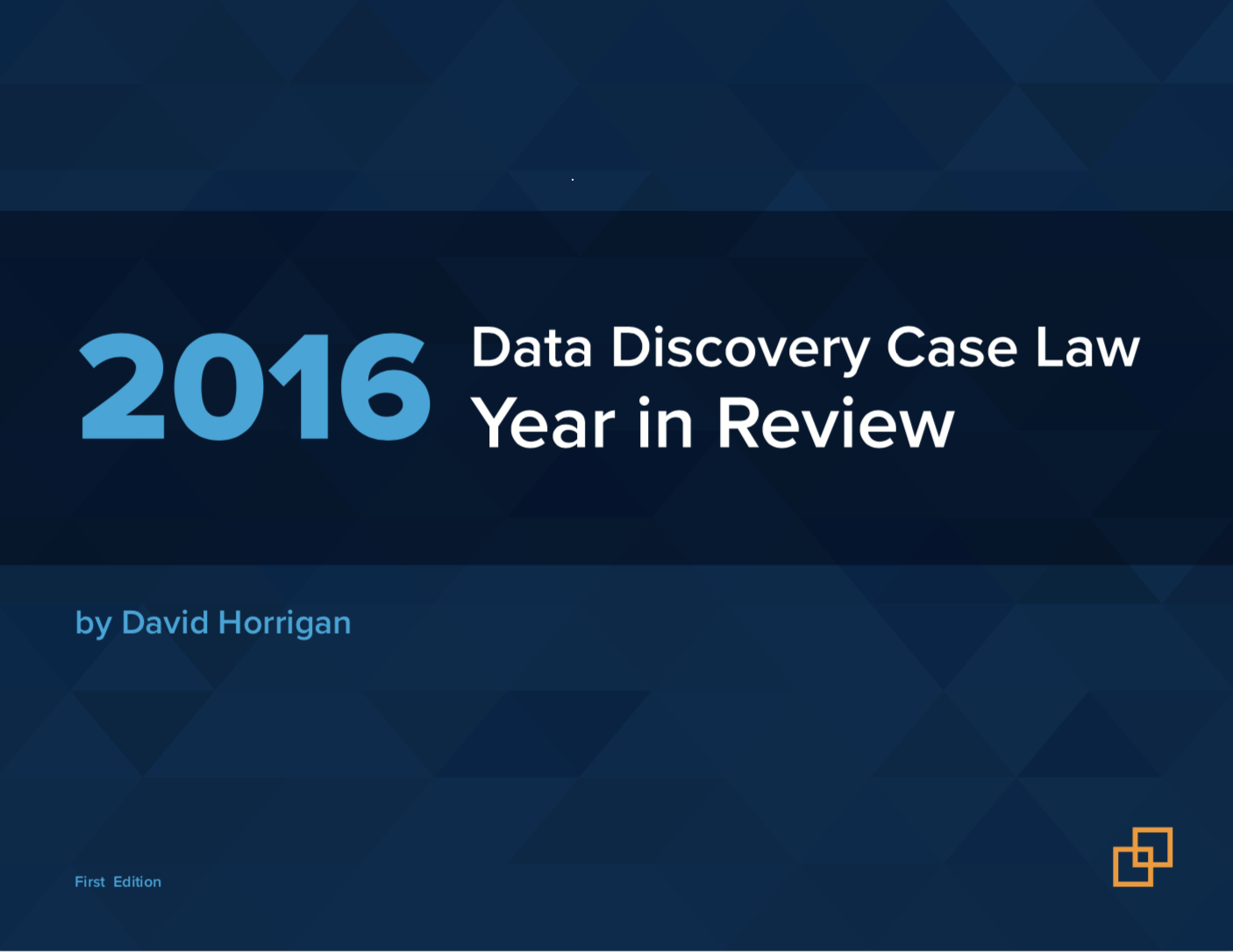 Our focus for the 2016 Year in Review was the effect of the new e-discovery amendments to the Federal Rules of Civil Procedure.

One of our biggest takeaways was how many courts were still using the old rules. Of course, in certain cases, courts had discretion to choose between the new rules or the old ones. However, as the year wore on, it was clear that some judges—or the law clerks writing their opinions—appeared to be unaware the rules had changed the previous December. Of course, the judges were nothing compared to the veritable cornucopia of lawyers across the land who had no clue the e-discovery rules had changed.

Among the highlights for 2016 were the Florida Supreme Court approving new rules for Florida lawyers requiring continuing legal education (CLE) on technology; the United Kingdom approving TAR in Pyrrho; the implementation of the new six-pronged test for proportionality in Fed. R. Civ. P. 26(b)(1); and, of course, the continuing saga of Deflategate, as the case made its way to the U.S. Second Circuit Court of Appeals.

You can download your copy of the 2016 Data Discovery Case Law Year in Review here. 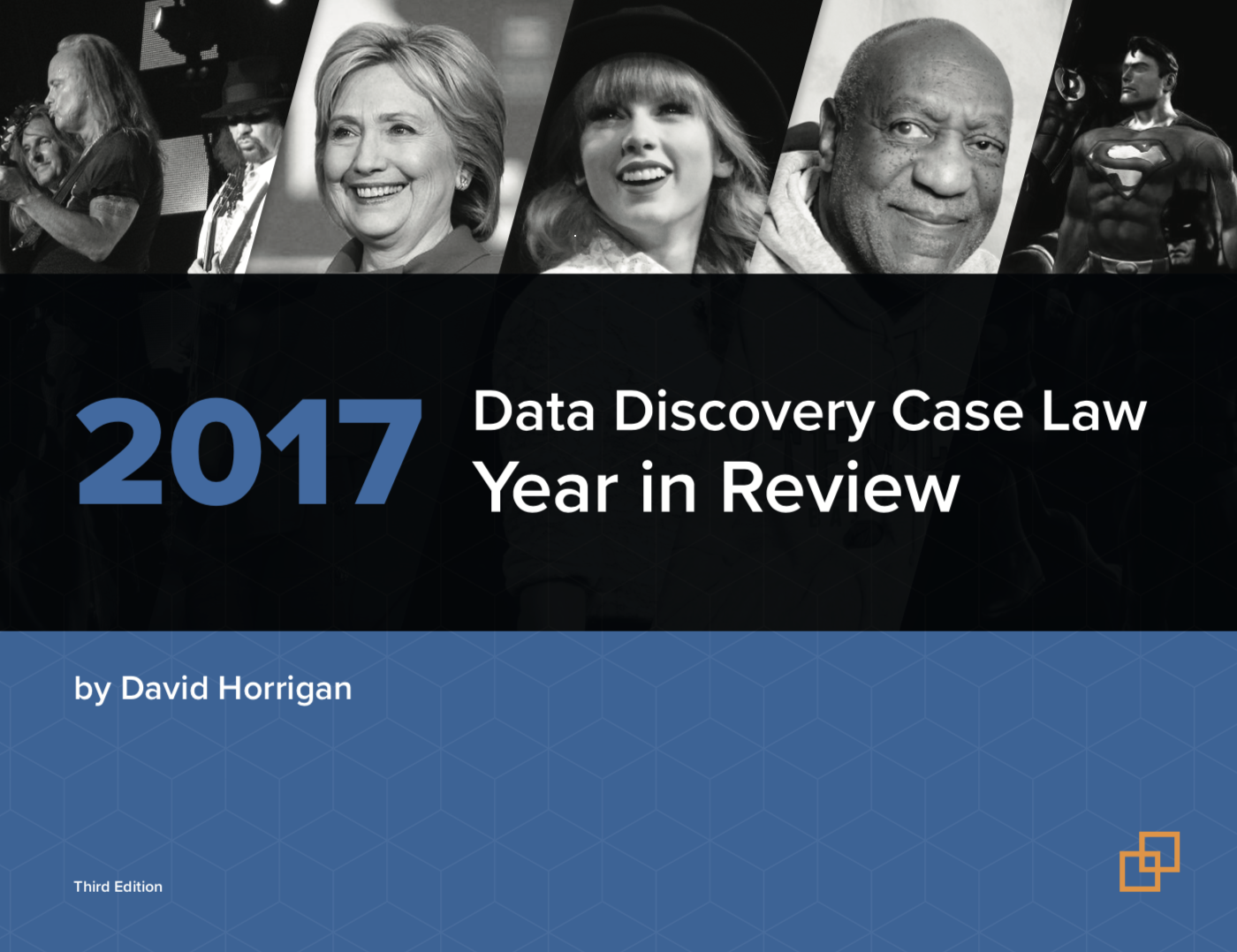 Taylor Swift’s litigation with a Denver DJ over alleged inappropriate conduct, and—for our data discovery purposes—surreptitious audiotapes and a coffee spill on a MacBook made up our most popular case of 2017.

The surviving members of Lynyrd Skynyrd made an appearance, as did the CEO of Marvel Entertainment—who saw his attorney-client privilege jeopardized by Disney’s email policy. In addition, former Secretary of State and presidential nominee Hillary Clinton made the 2017 edition, not surprisingly, over her email.

Of course, it wasn’t just celebrities who made our 2017 edition. Austrian privacy advocate Max Schrems made it—although, after his crusade against the Safe Harbor Framework and the Privacy Sheild, he’s somewhat of a celebrity, too. Judge Peck may qualify as a celebrity in the world of e-discovery with his latest wake-up call for the bar—this one against boiler plate objections in Fischer v. Forrest.

You can get your copy of the 2017 Data Discovery Case Law Year in Review here.

You’ll have to join us for the webinar next Thursday to get the full story, but we can give you some spoilers.

It should come as a surprise to absolutely no one that United States v. Microsoft made the Year in Review for the fourth consecutive year. Of course, who better to discuss Microsoft than Judge Francis—the original judge in the case?

It’s also no surprise that Carpenter v. United States made the cut, and Judge Barksdale—a former federal prosecutor—will lend her law enforcement expertise to the analysis.

We’ll also be discussing some classic e-discovery cases, including cases on cooperation and sanctions, and a grand slam for e-discovery proportionality law: Hinostroza v. Denny’s Inc.

Please join Judge Francis, Judge Barksdale, and me next Thursday. You’ll also receive the 2018 Year in Review e-book when it’s published in January for joining us; we hope you’ll learn a few things and have an enjoyable hour doing it; and in several states, you can pick up CLE credit before the year-end deadline. We look forward to having you join us.

The Best of Relativity Fest 2018: Our Favorite Quotes from the Conference