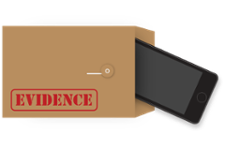 Editor's note: This article was first published by Legaltech News.

Police seize evidence all the time, making search and seizure an important part of the law. There is a great deal of jurisprudence about the limits placed on law enforcement as it attempts to seize evidence.

But what about the law of getting your stuff back after the police take it?

In May 2019, federal prosecutors indicted Robert Morgan for wire fraud, bank fraud, money laundering, and conspiracy. Prior to Morgan’s indictment, on May 14, 2018, the government seized his iPhone as part of their investigation.

However, prosecutors had a problem: Morgan had protected his iPhone with a passcode, and, not surprisingly, he declined prosecutors’ invitation to hand over the password.

Throwing another wrench into prosecutors’ pursuit of data, not only had Morgan protected the iPhone with a passcode, he had used Apple’s option to create a six-digit passcode instead of the traditional four-digit passcode.

The government then turned to GrayKey, a product of the US company, Grayshift, in order to crack Morgan’s passcode and get the data off his iPhone.

However, there was another curveball facing the federales. As a security measure, iPhones lock themselves for an hour after three unsuccessful login attempts. GrayKey used “brute force” to crack passwords, a process in which the application enters potential passcodes continually until it gets the right one.

The challenge here is that the application can enter only three passcodes before it has to wait an hour to enter the next three. After over a year of attempted cracking of Morgan’s iPhone, GrayKey had reduced the possible passcodes only from one million to a mere 960,526.

At this pace, it would take the government 37 years to crack Morgan’s iPhone.

I Want My iPhone Back

After enduring what many in 21st Century America would consider a ghastly disaster—going over a year and a half without his phone—on January 2, 2020, Morgan filed a motion for return of property under Fed. R. Crim. P. 41(g). In a move that surprised absolutely no one, the government opposed the motion.

Rule 41(g) provides that those “aggrieved by an unlawful search and seizure of property or by the deprivation of property [to] move for the property’s return.” (Emphasis added.)

In a matter with a fact pattern similar to Morgan, law enforcement seized an iPhone in United States v. Pinto-Thomaz, 352 F. Supp. 3d 287 (S.D.N.Y. 2018). Pinto-Thomaz moved for return of his iPhone after the government had it for approximately five months, arguing the time for executing the warrant had passed.

The court rejected Pinto-Thomaz’s argument, holding that, for warrants seeking electronically stored information, “[t]he time for executing the warrant in Rule 41(e)(2)(A) and (f)(1)(A) refers to the seizure or on-site copying of the media or information, and not to any later off-site copying or review.”

Knowing that “clock running out on the warrant” argument didn’t work in Pinto-Thomaz, Morgan took a different approach. He asked the court for a balancing test, arguing his interest in his iPhone and the information contained in it exceeded the government’s interest in the device, and thus, the Court should order its return.

The Morgan court conceded that there was a weakness in the Second Circuit test articulated in Ferreira and Pinto-Thomaz in that the courts failed to consider the moving party’s interest in the seized property. Thus, the Morgan court advised against strict adherence to the three-part test.

Nevertheless, the court held that—even if one were to use Morgan’s requested balancing test—his motion fails because the government’s evidentiary interest in the iPhone—established by the issuance of the warrant—outweighed Morgan’s interest in its return. However, the court’s holding was not absolute.

The court noted that the government does not get to keep the iPhone for the full 37 years it would take to crack the passcode.

“The Court agrees that anywhere close to 37 years is an unreasonable time to retain the iPhone. This does not mean, though, that the government should be compelled to return it now … There may very well come a point where the government’s retention of the iPhone is unreasonable—and that may be a time when the government continues to maintain that it needs the iPhone as evidence—but that date has not yet occurred,” U.S. District Judge Elizabeth Wolford wrote.

Police love to seize stuff. In Morgan, law enforcement seizes property as an investigatory method, but the government seizes data in other ways.

Criminal seizure—where the government seizes assets that are products of a criminal activity from those who have been convicted—and civil forfeiture—where the government seizes assets suspected of being part of criminal activity even without a conviction—are popular tools for prosecutors, with civil forfeiture often being highly controversial.

In Morgan, law enforcement wasn’t seeking forfeiture—but they might as well have been. The average life expectancy for a smartphone is only a few years, and the prosecutors in Morgan already had the phone for a year and a half, pretty much making it a de facto forfeiture.

Smartphones are different than other property law enforcement seizes. As Chief Justice John Roberts wrote in U.S. Supreme Court’s unanimous decision, Riley v. California, 573 U.S. 272 (2014), our phones have become “such a pervasive and insistent part of daily life that the proverbial visitor from Mars might conclude they were an important feature of human anatomy.”

Riley represented an important sea change in search and seizure law, but Morgan really chips away at the important rights granted by Riley. Sure, it’s apples and oranges to a certain extent because the main issue in Riley was whether law enforcement had to get a warrant before seizing a phone, and in Morgan, law enforcement had already obtained the warrant.

Nevertheless, the de facto forfeiture we see in Morgan illustrates that, if police do satisfy Riley and get a warrant—although they can’t keep your phone for 37 years—you may not see your iPhone for a long, long time.