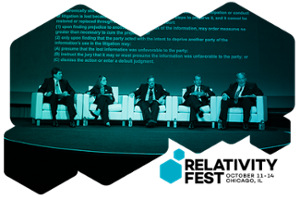 Yesterday, we kicked off the first full day of Relativity Fest with a keynote that included a sneak peek of Relativity 9.3 and continued with one educational session after another. Among those sessions were popular presentations by four federal judges—U.S. District Judge Nora Barry Fischer, U.S. District Judge Xavier Rodriguez, U.S. Magistrate Judge Andrew Peck, and U.S. Magistrate Judge David Waxse.

We kept the judges busy all day long, as they led discussions on everything from computer-assisted review to e-mediation, leaving attendees plenty to think about when they get back to work later this week.

Here are four notable lessons from the day:

1. Even Judge Peck thinks you should know how to use keywords correctly.

It’s no surprise Judge Andrew Peck—author of the landmark Da Silva Moore decision—would draw a standing-room-only crowd into one of the first sessions of the day, “A Conversation with Judge Peck on Computer-assisted Review.” He has, after all, become one of the biggest evangelists for the technology. What might surprise you, however, is the conversation about assisted review also included a discussion about correct keyword usage. Say what?

It’s not all that crazy. Judge Peck did start the discussion noting that the industry has been overwhelmingly slow to adopt technology-assisted review—and thus people are still relying on keyword searching. Seemingly taking an “if you can’t beat ‘em, join ‘em” approach for a moment in time, he gave the audience three useful tips:

Though Judge Peck noted that keywords are, of course, accepted by the court—and could have use prior to an assisted review workflow—he made it well-known he recommends technology-assisted review instead of using keywords alone.

“The big problem is when you’re looking at email—let alone text messages—where people are typing on small keys with big fingers, there are going to be spelling mistakes, and you’re not going to find that document [for which you’re searching]. It’s a major problem.”

2. Despite the benefits, the fear of TAR is strong—but you can help combat it.

It’s been more than three years since his landmark Opinion and Order Da Silva Moore, yet Judge Peck has only had one other case where it’s clear they’re using technology-assisted review.

Why the hold up?

“Results are infinitely better when TAR is used, but there’s this old notion that eyes-on review is the gold standard, which may be true if you’re reviewing 100 documents—but that’s not realistic,” said Judge Peck during his session.

This misconception and fear is hurting the adoption of technology-assisted review across the industry, and effectively hurting your clients’ ability to save time and money, as we learned from Judge Peck. His advice? The impetus for change needs to come from the clients—they need to ask for technology-assisted review, and to do that, they first need to know its merits.

So show them, he recommends.

Show them how the computer, unlike a lawyer, will code the a near-duplicate document the same way over and over again; explain the technology to them as a metaphor, like a Pandora radio station; or give them real-world examples of when and why it’s worked.

3. Cooperation is key in considering upcoming changes to the Federal Rules of Civil Procedure.

During the second-annual Judicial Panel on e-Discovery, moderator David Horrigan of kCura probed the judges for their opinions on the upcoming changes to the Federal Rules of Civil Procedure. The four judges had varying ideas on whether—or how greatly—some of the changes would impact lawyers’, paralegals’, and technologists’ work. However, in each discussion of the new amendments, one theme kept reappearing: cooperation.

Here’s what was covered and the judges’ accompanying advice for how to address these amended provisions.

Judge Fischer’s advice: “Consider, ‘do I really need this particular realm of discovery to advance my case, or is there some other way to prove what I need to prove?’”
Judge Peck’s advice: “Parties can usually agree on 3-5 key custodians. Ask the judge to see if you can resolve the dispute by going with key custodians first. Most cases eventually settle or go off on a motion and you may never get to more expensive stages. I think it'll go over well with most judges.”

Judge Waxse’s advice: “Get an agreement from the other side on what preservation consists of. You can’t have sanctions when there’s an agreement in place.

4. Find someone who can help if you’re in over your head.

To close out the day, Judge Fischer joined Sedgwick LLP partner Cinthia Granados Motley in a discussion on e-mediation, including how Motley helped launch the 7th Circuit Electronic Discovery Pilot Program, which provides e-discovery mediators to smaller civil cases where the parties and their counsel lack the experience and resources.

Throughout the session, Judge Fischer and Motley walked through the benefits of e-mediation and e-discovery special masters, who are appointed to cases to encourage and facilitate early discussions to enable disputes to be resolved more quickly and at a lower cost to both parties.

“If you get people who can talk the talk, you can cut through the extraneous and get to the meat of the issue,” said Judge Fischer.