Looking Back on a Decade of e-Discovery 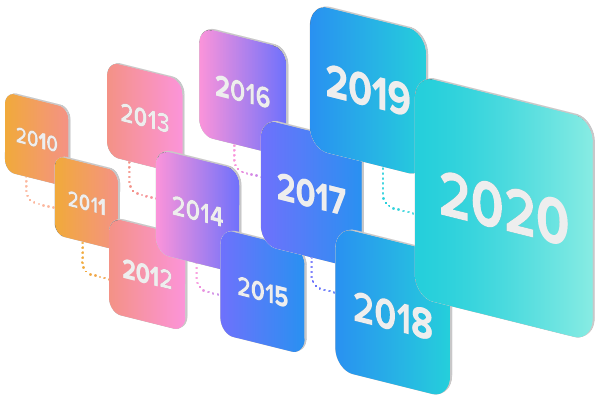 Take yourself back to 2010: The Burj Khalifa, the world’s tallest building, had just opened. Apple had just released their newest invention: the iPad. Justin Bieber, at the ripe old age of 16, was the world’s most-searched celebrity. Fake mustaches were really in.

At Relativity, we had just launched the first-ever Relativity Fest with a whopping 141 attendees. Our company, called kCura at the time, was just eight years old and was three years into a major growth spurt in building the world’s most comprehensive end-to-end e-discovery platform.

In 2010, e-discovery was quickly evolving, and people were starting to take notice. EDRM launched their e-Discovery Maturity Model, meant to show how your practice was stacking up when it comes to e-discovery.

A lot has changed since 2010. There are now four versions of the iPad that are as powerful as a 2010 computer, Justin Bieber is married, Relativity Fest has grown in attendance by over 1,000 percent, and we’ve built a state-of-the-art SaaS cloud solution with RelativityOne.

Most importantly, e-discovery is now more complicated than anyone could have ever imagined, and there are new use cases for it popping up every single day.

As we embark on a new decade of e-discovery, I set out to explore what exactly has changed in our industry. I turned to the internet for insight from the people who do this work every day and picked the brains of the industry experts right here at Relativity. What I discovered were three major changes in the past decade of e-discovery: rapid growth, technology sophistication, and expanding use cases.

Both the industry and the volume of information have grown.

Ten years ago, our industry was just beginning to grow rapidly. Litigation support, paralegals, and the like were all getting comfortable with our software and made up the main types of “e-discovery jobs.” Today, however, there are more and more people who are considered e-discovery pros and software power users, and lots of new, exciting jobs have been created to tackle some of the largest challenges with e-discovery.

Industry growth happened for a reason: the workload grew exponentially. Over the past 10 years, data volumes and caseloads have grown by huge margins year over year.

Carlo Ramos, an implementation specialist here at Relativity, noted that data volumes grew exponentially in the 2010s, citing “continued growth with mobile data in document review” as a key element.

Debbie Beeler, a senior paralegal at T-Mobile, echoed this sentiment. On LinkedIn, she shared one aspect of e-discovery she could have never dreamed of in 2010: “The need and/or the ability to collect data from a phone. #neverdreamed #ediscovery.”

Alongside pure growth came the need to discover different types of data—like emojis and different messaging platforms. For example, earlier this year, we released short message discovery and communication analysis to help reviewers get a better view of conversations spanning multiple channels, like Skype and Slack.

As the tech becomes more sophisticated, so do the people using it.

In 2010, nobody could have imagined that our phones would have cameras as sophisticated as DSLRs or that we would basically be able to work a full-time job from the palm of our hand. But here we are in 2020 with more technology at our fingertips than ever before.

For example, artificial intelligence, once a concept that people only dreamed about, is now a key part of our day-to-day lives, especially when it comes to e-discovery.

“Technology-assisted review, especially continuous active learning, has become a norm, and most of the time parties are now opposing linear review to save time and reduce costs,” Pavan said.

Interestingly, more sophisticated technology has empowered even more people to become power users. For example, at Relativity, we’re seeing more and more litigators learning our software and doing interesting things with cases. Being a tech-savvy lawyer was once a “nice to have,” and now it’s table stakes (and an ethical duty).

“The biggest change in e-discovery in the past 10 years is the attorney knowledge and involvement in the application of the technology,” said Brian Kawasaki, director of RelativityOne customer experience. “It is the connector that was missing 10 years ago, as the old model of cascading requests from attorney to technician had a natural disconnect. It’s great to see the technology facilitating the legal work directly. The direct utilization by the attorneys creates more powerful, impactful, and accurate results.”

e-Discovery is no longer just about litigation.

e-Discovery has transformed from a way to support litigators to a mini universe of thought leaders, technologists, and legal innovators.

Tricia Johnson, who supports our partners’ marketing efforts here at Relativity, noticed tons of novel use cases for e-discovery over the past 10 years.

“Ten years ago, e-discovery was strictly a legal concern. However, it has now grown to the point where the rest of the business is paying attention,” Tricia said. “e-Discovery has expanded in scope and now encompasses ancillary industries (like investigations and compliance), and e-discovery workflows and practices have been adopted by departments outside legal. Perhaps the biggest proof point that e-discovery is now an important business concern is the number of advisory firms who have added an e-discovery practice area to their firm’s services.”

Technology used to be an added bonus, and firms would absorb costs on their own. Now that e-discovery has grown so vast, firms have begun innovating with how they bill their clients, allowing them to grow their e-discovery practices.

This growth has also been supported by a huge community of e-discovery experts.

Helen Geib, corporate counsel at Xact Data Discovery, is shocked that e-discovery pros now have a day dedicated to them. On LinkedIn she wrote “#EDiscoveryDay. A nationwide endeavor to educate, celebrate, and advocate that crosses all the usual lines within our industry. I didn’t see it coming ten years ago. I hope to see even more collaboration fueling development and education in the next ten years.”

What a change 10 years can make. Here’s to 10 more years of exciting growth in our industry. Who knows what’s coming in 2030? We can only dream.

Andie Linker is a member of the product marketing team at Relativity.

Is the Future of e-Discovery Really in the Cloud?