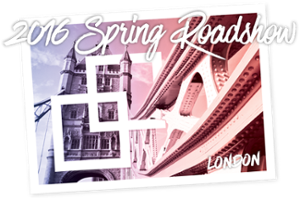 The 2016 Relativity Spring Roadshow kicked off in London on May 3, with stops in New York, Washington, and San Francisco continuing over the next week.

This year’s Roadshow had a new twist—a series of sessions in London on legal and industry issues in addition to the traditional educational sessions.

By the end of the stop in London, hundreds of attendees got insight on the e-discovery issues of the day from leading lawyers, industry analysts, e-discovery professionals, and the litigants from the UK’s Pyrrho case on technology-assisted review (TAR).

The day began with the session The UK’s Influence on Modern e-Discovery, featuring industry analysts Nick Patience of 451 Research and Sean Pike of IDC, UK-based e-discovery expert Jonathan Maas of Consilio, and moderated by this author, David Horrigan.

As the name implies, the goal of the session was to examine the British influence on global e-discovery, and—as the panel discussed—it goes way beyond bringing common law and juries to the world.

Proportionality in e-discovery, the panel agreed, was an important British legal contribution, noting the concept had been implemented much more thoroughly in the United Kingdom before it started gaining traction in the United States.

IDC’s Pike noted that data residency was an important UK contribution, while 451 Research’s Patience noted the British legal influence spanned across the globe.

“Look at a map of the world and look at all the countries Britain has invaded over the years; it shows the UK’s influence in law and e-discovery,” Patience said jokingly.

The panel served as an introduction for the ensuing panels of the day, perhaps most notably the sessions on privacy and the use of TAR the UK vis-à-vis the recent Pyrrho case.

“Of all the nations in the EU, here in the UK, we’re the most pragmatic about privacy,” said Consilio’s Maas.

Pike noted the growth of the e-discovery industry, which IDC estimates to be about $10 billion, with $8 billion of that being in services and $2 billion in software.

The panel also discussed the United Kingdom’s possible exit from the European Union.

Patience noted that bookmakers’ predictions were changing weekly, and Pike added a UK exit from the EU could have an adverse effect on the UK e-discovery markets, noting international clients are partial to the UK’s English language and EU membership when choosing an e-discovery venue.

In the next session, entitled What the Age of Privacy Regulation Means for e-Disclosure and Compliance, speakers examined the effect of increased privacy regulation on the profession and industry of e-discovery and e-disclosure.

McFarlane set the tone for the discussion when she described the EU’s General Data Protection Regulation (GDPR) as “a compromise that made no one happy.”

Some of the panelists’ observations may come as a surprise to some. For instance, KPMG’s Senders noted that most companies didn’t rely on the EU-US Safe Harbor Framework anyway, making the change from the Safe Harbor to the new Privacy Shield less significant.

For some useful practitioner takeaways, Cordery’s McFarlane noted parties can no longer charge for information requests, and—perhaps somewhat paradoxically—merely having equipment in the European Union would trigger the provisions of the current 1995 Directive, but it would not trigger coverage under the new GDPR.

Of course, moderator Chris Dale put things in perspective: “Most companies fear Chinese hackers more than they fear the GDPR.”

In a demonstration of kCura’s Relativity in action in the next session, Brian Stuart and Rhys John of EY, the global consulting firm branded formerly as Ernst & Young, discussed their work in e-discovery compliance.

Stuart and John explained the role of analytics in e-discovery compliance and addressed how analytics could be used to address the multiple interests of regulators.

“We’re trying to make it possible for lawyers to explain the back-end story,” said Stuart.

A Post-Pyrrho World of TAR

The final legal and industry session of the day featured a return of Chris Dale as moderator in a discussion of the recently decided Pyrrho Investments Ltd. v. MWB Property Ltd., 2016 EWHC 256 (Ch).

The panelists included counsel from both sides of Pyrrho, including Edward Spencer of Taylor Wessing and Daniel Wyatt of Reynolds Porter Chamberlain LLP, and kCura senior solutions specialist Greg Houston.

Spencer and Wyatt noted some early practitioner challengers and oddities. The initial challenge for Wyatt and his team was that a large percentage of the data was on tape. Spencer added, in an unusual twist for complex civil litigation, that the defendants had relatively few documents.

Moderator Dale made a couple of observations that could serve e-discovery practitioners well on any continent.

Finally, Dale mentioned an unofficial—but nevertheless important—proclamation for TAR and the law in general we’ll call the “Dale Doctrine.” The doctrine dictates e-discovery law practitioners follow the admonition RTFR, where the first “R” stands for “Read” and the last “R” stands for “Rules.”

We should remember that—because Dale is an English gentleman, not an American—that “F” doesn’t stand for “Federal.”