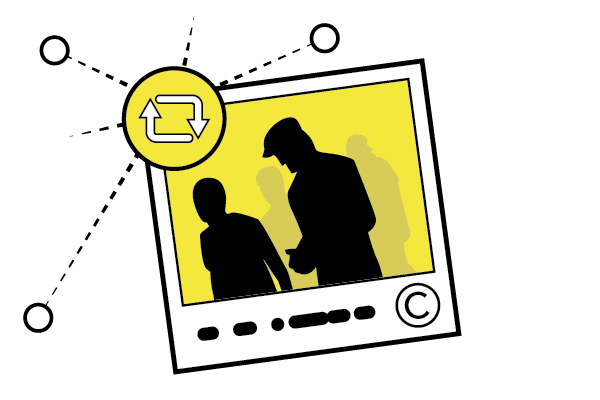 As often happens in the worlds of law and technology, a series of seemingly unrelated events has come together to have a potentially profound impact on something many do on a daily basis: linking to a Twitter post that happens to have a photo.

In Goldman v. Breitbart News Network LLC, legal precedents on an adult entertainment site and the Aereo television streaming service came together in consideration of a photo of football player Tom Brady that made its way from a photographer’s camera, to Snapchat, to Twitter, and then on to news stories.

In this case pitting internet free speech organizations against professional photography associations, US District Judge Katherine Forrest granted partial summary judgment on February 15 to a photographer arguing news organizations—including Breitbart, Gannett, Yahoo, and the parent companies of TIME and The Boston Globe—violated copyright when they embedded tweets with a copyrighted photo on their websites.

Celebrities in the Hamptons

In June 2016, Tom Brady, quarterback of the National Football League (NFL)’s New England Patriots, and Danny Ainge, president and general manager of the National Basketball Association (NBA)’s Boston Celtics, were on the streets of East Hampton, New York. Justin Goldman took a photo of them.

Goldman uploaded the photo to his Snapchat Story, a series of photos on the Snapchat social media platform. The Snapchat platform is designed to be ephemeral, where photos and videos remain posted for only a limited time. Unlike a “snap,” a photo on Snapchat that disappears (theoretically) after recipients see it, a Story lasts for 24 hours.

Of course, even Snapchat warns that sometimes ephemeral can mean forever.

“Important: Snapchatters who see your messages can always potentially save them, whether by taking a screenshot or by using some other image-capture technology (a separate piece of software or even simply by taking a photo of their screen with a second camera),” the social site warns its users.

In the case of Goldman’s photo of Brady and Ainge, it went viral on Twitter before its ephemeral life on Snapchat ended.

When Brady and Ainge were together in East Hampton, the Boston Celtics were trying to obtain the services of Kevin Durant, who, at the time, was a star player for the NBA’s Oklahoma City Thunder. The media theory was that Brady was joining the Celtics’ lobbying effort to bring Durant to Boston.

After Twitter users retweeted the photo, news organizations embedded the tweets into their news articles about whether Brady would help bring Durant to the Celtics. These embedded tweets featured Goldman’s photo.

Durant ended up going to the NBA’s Golden State Warriors, but the saga of Goldman’s photo continued.

When websites are built, coders may use Hypertext Markup Language (HTML) to create a series of instructions. When a user views a webpage, her computer connects with the webpage’s server, at which point the HTML code instructs the users browser on how to arrange the webpage on the user’s screen.

So why is all this talk of HTML code, embedded tweets, and third-party servers important?

Goldman filed two suits: one in November 2016 against Advance Publications, owners of the websites nj.com and masslive.com—as well as The New Yorker and Vanity Fair—and another in April 2017 against Breitbart News Network, Gannett Company, Time Inc., Yahoo Inc., the publishers of the Boston Globe, the Boston Herald, and others.

The suit against Advance continues, and in the action against the other news organizations, the media companies argued merely embedding the tweet was lawful under well-settled law, citing the U.S. Court of Appeals for the Ninth Circuit’s decision in Perfect 10, Inc. v. Amazon.com, Inc., 508 F.3d 1146 (9th Cir. 2007).

Applying what it and the district court called the “server test,” the district court in Perfect 10 held that—but for a fair use defense—Google’s thumbnails infringed because they were housed on Google’s servers. However, the court held, the links to the full-sized images were not infringing because they merely linked to images on others’ servers.

The Goldman court rejected the application of the server test to claims against the news organizations that embedded the tweet containing the Tom Brady-Danny Ainge image.

The Goldman court wrote: “Nowhere does the Copyright Act suggest that possession of an image is necessary in order to display it.”

In addition, although admitting it wasn’t directly on point, the court in Goldman cited the US Supreme Court’s decision in American Broad. Cos. Inc. v. Aereo Inc., 134 S. Ct. 2498 (2014), for the proposition that mere technicalities—such as an image being physically on a server verses being merely embedded in a tweet—did not control the display right of the Copyright Act.

“The principles that undergird the Aereo decision—chief among them that mere technical distinctions invisible to the user should not be the lynchpin on which copyright liability lies—apply with equal vigor here,” the Goldman court wrote.

Social media have become ubiquitous components of 21st Century life. The social platforms in Goldman have over half a billion monthly active users, with Twitter having approximately 330 million and Snapchat having about 255 million.

In addition, if you’re reading this post on The Relativity Blog, chances are you’ve used a social network this month, and if the holding in Goldman is embraced by other jurisdictions, it could have a profound impact on how you can use social media.

If you believe the news organizations and their amici—freedom of expression interest groups including the Electronic Frontier Foundation (EFF) and Public Knowledge—the sky is falling.

“The logic of the ruling applies to all in-line linking, not just embedding tweets. If adopted by other courts, this legally and technically misguided decision would threaten millions of ordinary internet users with infringement liability,” EFF said in response to the decision.

On the other hand, amici supporting Goldman—including Getty Images, the American Society of Media Photographers, the Digital Media Licensing Association, the National Press Photographers Association, and the North American Nature Photography Association—argued that adopting the Perfect 10 server test broadly would have a “devastating” economic impact on the photography and visual artwork licensing industries, adding that it would eliminate the incentives for websites to pay licensing fees, and thus “deprive content creators of the resources necessary to invest in further creation.”

Although the news organizations argued a decision for Goldman would “cause a tremendous chilling effect on the core functionality of the web” with their amici adding that a failure to adopt the server test would “radically change linking practices, and thereby transform the internet as we know it,” the court didn’t see its decision as a dire death knell for the digital age.

The court noted that—despite its ruling—there were multiple defenses, including the question of whether Goldman’s posting of the image to Snapchat released the image into the public domain, as well as defenses of fair use, defenses under the Digital Millennium Copyright Act (DMCA), and limits on damages by innocent infringement.

Even if fair use or the DMCA eventually save the news organizations here, Judge Forrest’s decision in Goldman should serve as a wake-up call to social media users everywhere. Especially for social media users outside the Ninth Circuit, the server test may not help you if you embed a copyrighted photo.