The Best of Relativity Fest London: Our Favorite Quotes about e-Disclosure, Brexit, and More 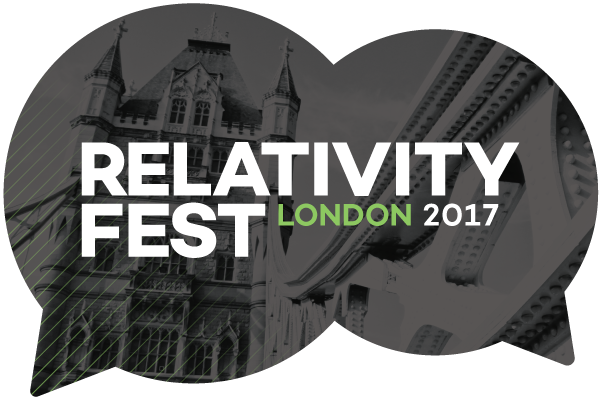 With our London event growing to become the largest e-disclosure conference in the UK, as well as undergoing a transformation into Relativity Fest London this year, we thought it was time to roll it into our bigger e-discovery conference tradition: sharing our favorite quotes from the speakers (and live-tweeters) after the event.

Read through the notable highlights below, and let us know what stood out to you in the comments or @RelativityFest on Twitter.

on the challenges of international e-discovery and e-disclosure:

“Clients are, in essence, juggling about six balls of uncertainty in trying to navigate their way through e-discovery projects—and that’s not only Brexit, it’s the Trump administration, it’s model clauses, it’s the EU-US Privacy Shield, the Umbrella Agreement, the GDPR, and trying to make sense of all these issues.”

on preparing for the General Data Protection Regulation (GDPR):

“Just getting mobilized at the start is a challenge. People have a theoretical interest, but putting in place a plan takes resources, it takes time, it takes commitment … the challenge of the GDPR is to move from the theoretical to the practical.”

and agreeing that Ireland may benefit from Brexit, but noting one consequence:

noting the GDPR will take effect before Brexit is finalized:

“There are still people who think we don’t have to worry too much about the General Data Protection Regulation because we’re leaving the EU, and I’ve even heard stories to the effect that companies that had already started compliance programs for the GDPR have decided to give up because ‘We’re leaving the EU; we don’t have to have to worry about it anymore.’ That, of course, is nonsense of the highest order.

“Post-Brexit, when we’re finally over Theresa May’s cliff, lying on the rocks below—even then, as we sort of put our hands above the water—we will want to be involved in trans-Atlantic data flows, and if we as a country don’t qualify under EU rules as a suitable home for data, then the data won’t come to us.”

Sean Doherty, Analyst for Governance, Compliance, and e-Discovery at 451 Research

as both a practicing attorney and industry analyst:

“I can’t see doing a discovery case today without analytics.”

“Although we’re getting much more volume, much more variety, and more complex data, courts are not giving us more time to litigate our cases, so that speed of response is very important in understanding your case; early case assessment is key.”

on the diversity of the Relativity Fest London International Panel:

“Our lawyers are extremely competitive. If you can offer them something which can allow them to get an upper hand or find their key documents more quickly, they’re going to take it because it’s something the other side might not be doing.”

on an e-discovery challenge:

“Going forward, I think it will be a much more collaborative approach. Previously, I think the vendors had sometimes been seen as an add-on … I’m now seeing a two-pronged approach where the law firm and the vendor approach the client together.”

and with predictions on the GDPR:

“I suspect that when this kicks in in May next year, that there may very well be quite a few high-profile victims who are not compliant in order to encourage everybody else to become compliant … Perhaps for the first time in 10 years, IG will be taken seriously as the umbrella over all the data in an organization … It’s the kick up the derriere of data-keepers.”

“Law firms that were not early adopters of technology will soon have to be.”

“I don't think legal teams have an issue with the technology behind assisted review. I think the issue is workflow.”

on attorneys’ fear of the “black box” in technology:

predicting the next place to have judicial approval of technology-assisted review (TAR):

“The next logical case is probably going to be New Zealand, Hong Kong, or Singapore, any one of those three.”

on the importance of adding Outlines to Relativity Fact Manager to allow users to think like a person:

“Each email thread tells a story, but sometimes a story has subplots; it takes a turn, and it doesn’t go the way you think. Email thread visualization allows you to see those clearly—those subplots, those twists, those turns—and how they relate to the main thread.”

on the acceptance of TAR:

“We’ve had a big interest and push into TAR. Previously, there were a lot of cases where they would consider it, but ultimately drop it. Now, it’s coming up repeatedly—that’s the first question: ‘Could we use TAR in this case?’”

and on clients requesting the mysterious TAR:

“‘Data privacy, what’s that?’ … I think a lot of Americans are quite convinced that their own government spies on them all the time anyway, so what’s the point?”

“The fact of the matter is we’re all guilty. I mean, you go back 10 years, nobody cared a tinker’s cuss about data privacy. People just didn’t think about it at all, but things have had to change enormously. When the GDPR—sounds like an East German republic—comes in next May, we’ll have to think about it more seriously.”