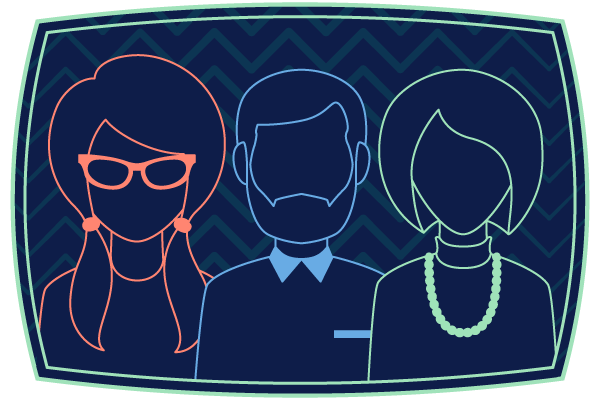 If you want to cause a stir at a family gathering, mention how millennials are undoubtedly the best generation.

Every generation has a list of unflattering stereotypes that define their age cohort. Baby Boomers are often described as work-obsessed and rigid. People refer to Gen Xers as cynical and Gen Ys as narcissists.

But is there truth to these stereotypes? And even if so, can’t we all just get along?

To understand the core variances in generations and whether they impact the workplace, I sat down with Ken Rechtoris, partner at Sheppard Mullin Richter & Hampton (who also happens to be my dad). Percy Olsen, an associate at the firm who works with Ken and shows him how to Skype, provided the millennial perspective.

Whether or not you believe generational stereotypes are substantiated, it is indisputable that the world was starkly different in the 1980s.

When Ken started at University of Iowa College of Law in 1982, he didn’t have a laptop with which he could instantly access a plethora of materials relevant to a case. Research looked a lot different: he devised a keyword unique to his search and then looked for that keyword in a bound book. That book contained a series of cases in which the keyword appeared, along with the volume and page number identifying where each case was featured in the Federal or State Reporters.

After Percy and I nodded our heads indicating that we had, in fact, seen a bound book, Ken added: “Learning to research this way, although tedious, resulted in a more thorough selection of cases than the use of keywords in technology sometimes offers.”

Graduating from the University of Michigan Law School two years ago, Percy’s experience deviated from Ken’s use—or lack thereof—of technology. Rather than poring over pages in physical books, Percy and most other millennial law students had access to search engines, such as West Law, to rapidly complete a search that identified the cases relevant to the engagement.

“With these databases, you have a wider breadth of offerings and there are more cases you can get through or discard,” Percy countered.

“I do see the value, though, in writing out the cases and applicable references that stand out,” Percy added, pointing to Ken’s hand-written notes for the interview. “The physicality of writing helps it resonate.”

Don’t Judge a Generation by Its Stereotype

“To be honest, I was expecting that I was joining an office of Luddites,” Percy said. “However, after working here, I have found that the other attorneys are engaged. When I bring up a new technology they haven’t seen before, they are game to learn more and jump right in.”

In Percy’s experience at the firm, his preconceived notion that Baby Boomers and technology are analogous to oil and vinegar was far from reality. In that same vein, Ken and his Baby Boomer counterparts could have unfairly assumed Percy would care more about the quality of his Instagram story than the precise drafting of a brief. However, what makes an attorney great has very little to do with their age, and everything to do with their character, according to Ken.

“Every generation thinks they have worked harder and put in more time than the generation before them,” Ken said. “But the truth is, successful associates over time all have the same characteristics: they are ambitious, hard-working, and proactively seek out projects and obtain results. This has been the case since I started practicing.”

This may ring true for many of us; most professionals have encountered an unengaged or distracted colleague at some point in their career. For the most part, though, characteristics stem from an individual, not a generation.

With millennials becoming the largest group in the U.S. workforce, they are driving change across all industries. This change may draw skepticism from colleagues who are accustomed to existing processes. However, this skepticism may soon dissipate as they realize the benefits they can accrue by embracing change.

In 2018, we can instantly connect with our loved ones across the world, order McDonalds to our doorstep, and use active learning to make informed coding decisions to drive an accelerated document review. So, is change really such a bad thing?

“Millennials are so technologically proficient that it intimidates many of us who have been around awhile,” Ken said. “Anything that is unknown is intimidating until you realize its potential in changing the way things are done for the better.”

Many law firms are welcoming this change with open arms and foster a culture of collaboration in which associates can ask questions and get more in the weeds on projects. This was often not the case, however, in previous decades.

“When I started, you spoke to a senior partner when you were spoken to,” Ken said. “Overall, this was detrimental as you didn’t understand how to bolster your written or oral communications skills. Frankly, being more interactive creates a better workplace that is ultimately more productive.”

Throughout his two years at the firm, Percy has developed strong working relationships with many of the firm’s partners and found a mentor in Larry Eppley, managing partner of the Chicago office.

“Larry does a great job of keeping everyone, from the partners to the associates to the staff, engaged and excited to be here,” Percy added. “The ability to work in a congenial workplace where everyone is friendly and working toward a common goal is why I joined Sheppard Mullin.”

Just like Bob Dylan sang (rocking a similar hairdo to a younger Ken), times are a-changin and this change will be beneficial for all, whether you are a millennial or Boomer.

That said, don’t get me started on those Gen Zs.

How Your Team's Millennials Will Up Your e-Discovery Game

For Job-Seeking Law School Students, Technology Is the Answer