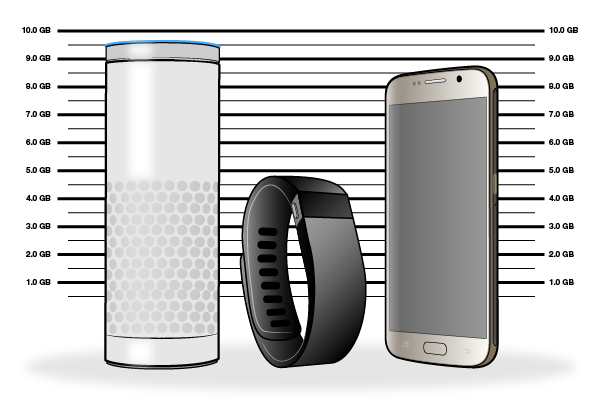 Editor's Note: Originally published in May 2017, we refreshed this post to highlight a new way in which emerging data sources are helping investigators track down criminals. Baddies, beware.

It’s a smart phone, a smart watch, a smart car, and even a smart oven. It’s the Internet of Things (IoT) and, unless you live under a rock, it’s taking over your life. (Even if you do live under a rock, Google Earth has probably captured a photo of you coming and going to forage for food.)

IoT is contributing significantly to big data—and often, that data is coming into the spotlight in the unending search for justice. Civilly, this means suits are settled or litigated with the benefit of emails, structured data, and social media evidence that can verify timelines and prove intent.

In law enforcement, it means it’s getting harder and harder for criminals to give investigators the slip—because there are more plentiful, more reliable “witnesses” out there than ever.

Wireless speaker systems and voice-controlled personal assistants like the Amazon Echo and Google Home sit in the living rooms of millions of families. Though seemingly idle between commands, these devices are always ready to listen—and sometimes, authorities might like to know just what they’ve heard.

In 2016, police sought to obtain data from an Amazon Echo during a murder investigation. Although the search was initially resisted by Amazon, the company ultimately handed over the data in question with the permission of the defendant. In the end, the murder charges in this case were dropped, but the point is that any crime committed in an otherwise empty home may easily be overheard by someone like Alexa—an AI who, once triggered (purposefully or otherwise) by her wake word, has a perfect and very discoverable memory for any sound.

You must’ve noticed the proliferation of these plastic bracelets and clips on folks around the world by now. The Fitbit and similar products have become deeply integrated into a healthy lifestyle craze, allowing users to track their activity, nutrition, sleep patterns, and more simply by keeping a colorful wearable on their person throughout the day.

In another murder investigation, authorities used data gathered from a victim’s Fitbit to call the suspect’s timeline into question. Citing evidence that the victim moved a much greater distance immediately before her death than the suspect’s story warranted, police arrested him and are pursuing charges of murder, tampering with evidence, and providing a false statement.

Don’t get yourself one of these lifesaving medical devices if you’re planning to use your renewed health for unlawful pursuits after it’s in place.

In February 2017, an arson suspect was indicted on felony charges based on inconsistencies in his story about a fire that caused $400,000 in damage to his home last year. Where did investigators find evidence of those inconsistencies? In the suspect’s pacemaker data, which, according to a cardiologist, proved he couldn’t have been asleep when the incident took place like he claimed to be.

A new generation of appliances is hitting the market, including refrigerators with cameras that offer a live feed of their contents (to enable the forgetful shopper on the go) and connected apps to track when people access the fridge.

According to an interview with Mark Stokes, head of the digital, cyber, and communications forensics unit at the Metropolitan Police, “Wireless cameras within a device, such as a fridge, may record the movement of owners and suspects. Doorbells that connect directly to apps on a user’s phone can show who has rung the door. … The crime scene of tomorrow is going to be the Internet of Things.”

In short, the things that will continue to make life simpler for the average consumer might also make work simpler for investigators—and harder for villains.

This, of course, is perhaps the most obvious on our list of connected devices—but it’s also the hardest to avoid. Even if the masked muggers of today are smart enough to leave their iPhones at home during a criminal outing, their victims’ phones may not be helpless in the face of danger.

There are plenty of well-respected apps available to help people stay safe while they’re out and about. Users can rely on these apps to dial emergency services, snap and share photos of attempted assailants, automatically contact their friends and family, and keep a log of their activity and GPS coordinates during what might be a risky situation, like a nighttime jog. Thankfully, this means pedestrians are far from helpless in the face of a threat—and, hopefully, assailants can be easily deterred or captured based on data generated by apps like these.

There are innumerable ways consumers are protecting themselves, suspects are incriminating themselves, and authorities are evolving their investigative toolbox thanks to new kinds of discoverable data and the Internet of Things. For a close look at the many ways today’s average home might give unexpected clues to a crime, we recommend this interactive infographic from the Law Enforcement Cyber Center.

Ever wonder what countries your ancestors came from, whether you might pass your mom's dimples onto your own children, or if you're genetically predisposed to celiac disease? These days there are many options for at-home genetic testing, which allow you to send a saliva sample to an independent lab in exchange for a detailed report on these and other questions of nature and nurture.

But if you—or a family member—have malice on your mind, it's best to deny the temptation to explore your chromosomal makeup. Authorities recently revealed that the Golden State Killer—infamous for a string of murders and other violent crimes in the 1970s and 80s—was tracked down thanks to genetic information captured by such geneological services. Turns out you consent to some loss of genetic privacy by sending away that sample, and authorities can use that information to their advantage. (The tests aren't always accurate, anyway, so it's worth a second thought even if you plan on remaining a perfectly upstanding citizen.)

Are you intrigued by this explosion of new data sources, or intimidated by it? Why? Let us know in the comments or @RelativityHQ on Twitter.