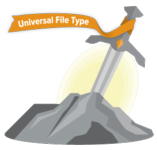 A Vision of Camelot in e-Discovery Law

What do a tech visionary’s vision of Camelot, international standards, trash in Texas, NASCAR, and PDF files have in common? Interestingly enough, more than you might think.

Throughout the history of computing—and the history of e-discovery—one of the biggest challenges has been the ability to use data created in different applications. What good is having an electronic document if you can’t open it?

When John Warnock came up with the idea of The Camelot Project in 1991, his goal was to capture documents from any computer application and transmit them electronically for viewing and printing on just about any machine.

Adobe Systems Inc., the company Warnock co-founded, transformed his idea into the Portable Document File and released it in 1993 in Adobe Acrobat. In a side note for the e-discovery practitioner, Adobe acquired the legal rights to TIFF, the Tagged Image File Format, with the company’s 1994 acquisition of Aldus Corp.

The journey from Camelot to a world where kingdoms and corporations use PDF files on a daily basis has made many aspects of computing much easier—with everything from tax returns to e-books produced on PDF.

Adobe released PDF to the Association for Information and Image Management (AIIM) in 2007 for publication in an international standard by the International Organization for Standardization (ISO). The following year, ISO 32000 was ratified, and PDF is now used free of charge in the public domain around the world.

Despite the growth in the use of PDF files, we still haven’t attained Warnock’s vision of Camelot where any computer file could be opened on any computer, and it’s had a profound effect on e-discovery.

The form of production is one of the more important aspects of e-discovery, and the 2006 e-discovery amendments to the Federal Rules of Civil Procedure established today’s legal standards.

With the 2006 amendments clarifying the requirements for the form of production, John Warnock’s vision of a Camelot with ubiquitous PDF files might have come to litigation, but federal rulemakers had other ideas.

When amending Rule 34, rulemakers rejected the idea of mandating a standard form of production, noting that it might be impossible technologically and that—even if it were possible—requiring that diverse types of ESI all be produced in the same form could “increase the costs and burdens of producing and using the information.”

Although the FRCP don’t mandate a form of production, Fed. R. Civ. P. 34(b)(1)(C) allows the requesting party to choose the form of production. In addition, Fed. R. Civ. P. 34(b)(2)(E)(i) provides that a party “must produce documents as they are kept in the usual course of business or must organize and label them to correspond to the categories in the request.”

Perhaps just as important as these provisions is the requirement in Fed. R. Civ. P. 26(f)(3) that litigants develop a discovery plan, including the form of production.

Despite the provisions of Rule 34 and the requirements for Rule 26(f) conferences, what has ensued has been almost a decade of litigation about litigation as parties have gone to court over the form of production.

Since the earliest days of the current rule, courts have stressed that litigants should resolve form of production issues early in litigation.

In what we could call the Kentucky Speedway standard for speedy agreements on the form of production, a federal district court in the NASCAR dispute of Kentucky Speedway, LLC v. National Ass’n of Stock Car Auto Racing, Inc., No. 05-138 (E.D. Ky. Dec. 18, 2006), noted that parties should address form of production disputes, such as those over metadata, at the Rule 26(f) conference.

Of course, many litigators and technologists of today might reject the observations of the Kentucky Speedway court on the usefulness of metadata. In its decision—issued a mere 17 days after the 2006 amendments took effect—the court wrote, “In most cases and for most documents, metadata does not provide relevant information.”

Nevertheless, the overall lesson from Kentucky Speedway holds true today. If you wait until seven months after a production to request metadata, things will not go well for you.

For instance, in Autotech Techs. Ltd. P’ship v. Automationdirect.com, Inc., 248 F.R.D. 556 (N.D. Ill. 2008), the requesting litigant didn’t specify the form of production in the initial request, and the producing party did its production in PDF. When the requesting litigant later requested metadata, which was unavailable in PDF, the court denied the request, holding that because the form of production was not specified initially, under Fed. R. Civ. P. 34(b)(2)(E), the producing party was allowed to produce in the form “in which it was originally maintained, or in a reasonably usable form.”

However, e-discovery practitioners should proceed with caution. In In re Waste Mgmt. of Texas, 392 S.W.3d 861 (Tex. App. 2013), a Texas state intermediate appellate court ordered Waste Management, the producing party, to produce native files even after it had already done a production in PDF.

The lessons of Kentucky Speedway, Autotech, and Waste Management are pretty clear: how you use your e-discovery tools—and how you comply with the rules—are often just as important as your form of production.