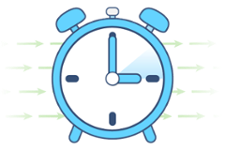 Adjusting to Changing Times in e-Discovery

Let’s start with a riddle. What practice can be accurately described as follows?

If you guessed Daylight Saving Time (DST), perhaps you’re still holding a grudge over losing an hour of sleep each spring, or lamenting all the time and effort spent resetting clocks (or rocks?) twice a year.

More than ever before, the concept of DST is being debated in social, political, and cultural circles–but naysayers seem to have seized the narrative. Publishers and media outlets including The Atlantic, Time, CNN, and many others have written passionate, data-driven editorials begging for the ritual of "springing forward" and "falling back" to stop. Some even go as far as to claim bouncing between daylight and standard time is literally killing people. Meanwhile, US states like Florida are pursuing legislation to make DST permanent, and Finland is lobbying the European Union to permanently end the practice as well.

Regardless of the outcome of these efforts, it’s fair to say that, whether DST stays or goes, you’ll need to prepare for changing times. But beyond the obvious impacts to our schedules and how much light we see in the mornings and evenings, how is the topic of DST related to e-discovery or the legal profession?

Many of the arguments against the practice of DST are rooted in a much bigger and utterly intractable issue: the sun doesn’t shine on everyone on Earth at the same time. This didn’t become a predicament until technologies like the railroad and telegraph created a need to understand "relative time"–requiring those in widely separated longitudes to synchronize their time-keeping devices and account for transcontinental differences. (Fun fact: The four standard time zones in the continental United States were first officially defined and adopted in 1883 at the very same spot where Relativity’s Chicago headquarters now stands).

However, the adoption of time zones worldwide ended up creating as many issues as it solved. One might reasonably expect there to be 24 global time zones, each one about an hour apart from the next. But there are in fact 39 time zones currently in use. And, if you thought things couldn’t get any more convoluted, these zones aren’t all separated in hourlong increments: some regions have defined time zones that are 30 or 45 minutes behind or ahead of the clocks in neighboring zones. For example, in 1906, India–a country large enough for three time zones–merged its original two zones (Bombay Time and Calcutta Time) to create a single Indian Standard Time zone split right down the middle, 30 minutes from each of its two predecessors.

Thankfully, the adoption of Coordinated Universal Time (UTC) in 1960 seemingly solved these logistical problems by providing a single, standardized point of reference by which all other world times could be measured or adjusted via an "offset."

However, having a UTC offset hasn’t solved everything. As times have changed and the speed and scale of international business continues to accelerate, technology innovators have had to work furiously to keep pace with an ever-evolving chronological landscape. As this video articulates, computer engineers and software developers still have a trying time creating solutions to the world’s clock-related conundrums.

Awareness of adjusting to UTC offsets–marking how many hours/minutes a given zone is behind or ahead of UTC–still governs most time-related technological and logistical practices to this day, including those of the e-discovery industry.

As noted by Relativity Product Manager Rene Laurens in a processing-themed blog post, having an understanding of time zones and offsets can be critical to your e-discovery workflow:

Time zones can be very important in e-discovery. Dates and times are standardized in one time zone called the Coordinated Universal Time (UTC), but are displayed to users as the time zone that is set on their computer. You can determine where the data came from and apply the time zone accordingly, or you can make a universal decision to process all of the data in the UTC time zone for consistency. Setting the appropriate time zone when you process data will ensure that the date and time of the extracted data is populated into fields in review that are reflective of how it existed on the original machine. This is an important decision because the time zone set can affect which documents are included for review if you’re eliminating any data based on date ranges.

In addition to considering time offsets when setting data restrictions, it’s critical that your teams understand how time and date data is stored and processed. This is especially critical in an industry where timing is often a critical part of seeking the truth and acting on it. For example, a significant sale of stock 30 minutes before a major public announcement might invoke suspicion of insider trading–whereas the same sale 30 minutes after that announcement is simply expected behavior. When pursuing justice, timing can truly be everything: what’s legal one second may be illegal the next.

Similarly, the loss of an hour can raise issues related to both employment law and legal teams tracking their own hours, since systems must be set up and audited to ensure those working overnight shifts during time changes are properly credited and compensated.

Don’t Wait Until the Eleventh Hour to Prepare

If nothing else, we hope this post sounds an alarm for e-discovery practitioners who want prevent any time zone or DST-related troubles on their watch. Here are a few tips for those hoping to prepare ahead of time:

1. Ensure your technology systems are properly configured to account for time changes and offsets. For example, Relativity Processing is set up for compatibility with all of the "half hour" time zones (e.g., India), and a specific table in the Processing database accounts for Daylight Saving Time on a year-by-year basis to ensure the accurate DST rule is always used for the given year. Relativity also has a unique solution for configuring documents’ native time zone offset when required.

2. Build time zone awareness on your team. It’s likely that you work with colleagues in locations across your continent or across the globe. But are you always aware what time it is in their city or office when you make a call or send an email? At Relativity, we consider timeliness an unwritten rule of our team’s culture–and with burgeoning locations in London, Krakow, and elsewhere, we make it a priority to conduct business during hours that are convenient for all team members. To ensure we don’t forget, plaques on our walls throughout our offices remind us of the time offset between our major offices. And because DST schedules aren’t uniform between every country throughout the year, they’re two-sided so they can be flipped for accuracy.

3. Be conscious of time when communicating with clients and customers. It’s easy to get in the habit of reflexively using the same time zone abbreviation in emails, invitations, event descriptions, and website copy. But be aware that anyone who uses a time converter tool to check "EST" or "CST" against their own local time will be off by an hour during the summer months when those time zones switch to "EDT" and "CDT." Being unsure if you’re calling into a session at the right time is more than just an annoyance: at worst, it can lead to missed opportunities to connect and collaborate.

Whether you’re marveling at just how much difference one hour can make, marking your calendar to prepare for the change in your region, or joining a proverbial (or literal) picket to demand more consistent time-keeping, don’t forget to make the right adjustments to your work habits in addition to your internal and physical clocks.

Navigating the Digital Geography of Remote Work in Legal

Processing 101 for Attorneys (and Anyone Else Who's Curious)