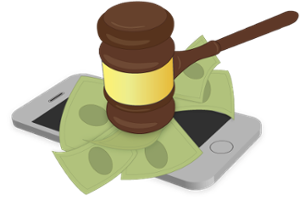 When Gurindar Sohi was a student in Rajasthan, India, he probably didn’t think he would play a role in the evolving jurisprudence on e-discovery costs.

A year and a half after Sohi’s eventual employer won a $234 million verdict over Apple Computer in a dispute over one of his patents, Sohi’s patent has now resulted in another federal district court analyzing just what e-discovery costs are recoverable when you win your case.

In 1998, Sohi and three of his students obtained a computer microprocessor architecture patent, Table-Based Data Speculation Circuit for Parallel Processing Computer, US Patent No. 5,781,752.

The inventors assigned the patent to the University of Wisconsin’s intellectual property arm, the Wisconsin Alumni Research Foundation.

Alleging that Apple Computer used the university’s patented technology in its iPhone 5s, iPhone 6, iPhone 6 Plus, and some iPads, the university sued Apple for patent infringement in 2014.

Apple countered that it did not infringe and that the university’s patent was invalid, but, in an October 2015 verdict, a federal jury in Wisconsin sided with the university, finding Apple liable for $234 million in damages for patent infringement.

As is often the case, a related issue was the recovery of costs for e-discovery. Not surprisingly, the university and Apple could not agree on what the university was entitled to recover.

It Depends on What the Definition of “Copy” Is

The reimbursement of e-discovery costs has a long and tortured history.

Unlike other jurisdictions, such as the UK, American courts generally do not have a “loser pays” framework where the loser in litigation must pay the costs incurred by the victor in a court case.

The policy reason for the so-called “American Rule” is to help ensure access to justice by eliminating the fear of litigation costs that may deter people from pursuing their days in court.

In America, we want to avoid the scenario of: “The defectively designed and deceptively marketed Bass-o-Matic gutted my arm, but I’m afraid to sue because if I lose, I may have to sell my house to pay off an e-discovery cost judgment.”

On the other hand, Dan Aykroyd’s character and the other fine folks at Bass-o-Matic may argue they have to settle frivolous claims about their home helper because they can’t afford litigation.

However, there are exceptions. 28 U.S.C. §1920, a federal law dating back to the 1800s, provides for the reimbursement of some litigation costs. Whether e-discovery costs are included here has been the subject of litigation.

The seminal case on the issue is Race Tires Am., Inc. v. Hoosier Tire Corp., 674 F.3d 158 (3d Cir. 2012), where the Third Circuit took almost literally the statute’s language on reimbursement being limited to costs for “copies” and “exemplification.”

Thus, the Race Tires court disallowed e-discovery expenses unless they related directly to making exemplars for court or copies. For example, costs for converting native files could be considered copying, so they would be covered, but data storage would not.

Like Race Tires, Split Pivot takes a narrow, more literal reading of the ancient federal statute, with the Split Pivot court holding that the only reimbursable costs under section 1920 are “copying of electronic data, including copying metadata and hard drives.”

Thus, the court in Wisconsin Alumni v. Apple disallowed $115,475 in costs for storage of the university’s e-discovery database because its purpose was not exemplification or copying.

In addition, the Wisconsin Alumni found more e-discovery tasks that didn’t pass muster for spoils to the victors cost reimbursement under section 1920.

The university also sought reimbursement for the e-discovery work done by the litigation and database support department of its law firm, Irell & Manella.

The university sought reimbursement from Apple for a $147,757 e-discovery bill from Irell & Manella, which included tasks such as database management. The court held that database management was not reimbursable under section 1920, and—because the tasks were commingled on the bill—the court split the baby and ordered it reduced by 50 percent to $73,878.50.

The court chopped an additional $30,616 from the bill because it agreed with Apple that the purchase of data by two university experts didn’t qualify for reimbursement.

However, we would be remiss in failing to note that the court rejected some of Apple’s attempts to cut the costs for the agony of its defeat. The court rejected Apple’s challenge to $6,034 in witness travel expenses. Apple contended that university counsel scheduled depositions in Los Angeles for the convenience of counsel and that it drove up travel costs. The court agreed with the university’s description of this objection as “silly.”

Why the Apple-Wisconsin Fight Matters

Wisconsin Alumni doesn’t make new law in the field of e-discovery costs—but it does expand the law a bit. Wisconsin is in the Seventh US Circuit Court of Appeals, which has not explicitly followed the Third Circuit on its Race Tires strict interpretation of section 1920.

However, with Split Pivot—and now, Wisconsin Alumni—we now have two district court decisions in the Seventh Circuit with a strongly strict interpretation of section 1920.

This interpretation is important because not every court has followed the Third Circuit’s Race Tires holding. For instance, in CBT Flint Partners v. Return Path, Inc., 737 F.3d 1320 (Fed. Cir. 2013), the Federal Circuit articulated a looser interpretation of the statute.

Of course, the answer is simple, even if the remedy itself is not: Congress must take action.

It’s absurd that litigants must waste their time and stress limited court resources by trying to shoehorn 2017 litigation into nineteenth century law to determine which e-discovery activities constitute “exemplification” or “copying.”

Obviously, the nuances of civil procedure may not be at the top of anyone’s agenda in Washington at the moment.