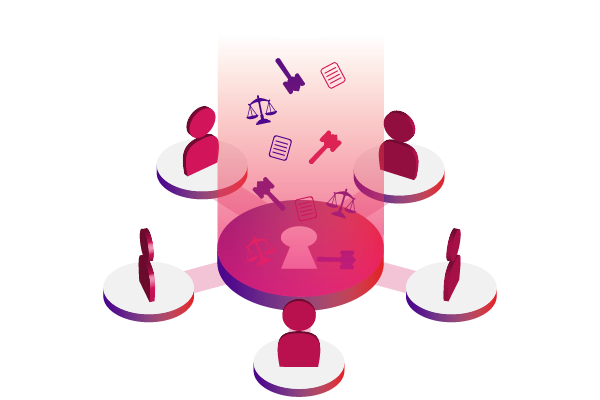 The 38th Legaltech is in the books. Now part of the expanded Legalweek, ALM’s venerable legal technology conference has evolved with the times—and even experimented here and there. For instance, some of us attended “LegalTech New Orleans” almost two decades ago.

I was a speaker at my first Legaltech 18 years ago, but there are many people who’ve been to more Legaltechs than I, and one of them is Bob Ambrogi.

It’s why we took special note of his posts last week about Legaltech at Legalweek.

In the Echo Chamber?

Bob’s two posts, one in Above the Law, Legal Tech for the Legal Elite: Observations of Two Conferences, and a follow-up LawSites post, Five Days, Two Conferences, One Echo Chamber, were insightful commentaries, and they made us think.

But, perhaps not in the way Bob intended.

I just spent five days at two conferences dedicated to the 10 percent in law who make up big firms and big corporations, wondering how legal tech and innovation became the domain of the legal elite, and how true change will come about in law without more voices at the table.

At Legalweek, one need only have looked at the roster of speakers to see how the conference skewed. They came mostly from large law firms such as Baker McKenzie, Morgan Lewis, Orrick Herrington, and Seyfarth Shaw, or from large corporations such as JPMorgan Chase, GlaxoSmithKline, AIG, and Toyota, or from major vendors that provide products and services to large firms and large corporations, most prominently in the area of e-discovery.

Although he conceded both Legalweek and another newer conference, Inspire.Legal, were “strong events that served important purposes,” he added, “Virtually nowhere to be found were the 90 percent of lawyers who practice outside Big Law, the business clients who do not run mega-corporations, the access-to-justice community, or those disenfranchised from the legal system.”

There was at least one session at Legalweek where access to justice was center stage. Part of our Relativity Legal and Industry Education program at Legalweek included the session Access to Justice: Substantial Challenges and How You, the Law, and Technology Can Help. At Relativity, it was part of our efforts to venture outside the “echo chamber.”

Also during the program, Starbucks Vice President and Assistant General Counsel Zabrina Jenkins discussed what Starbucks was doing to help, University of Waterloo Professor Maura R. Grossman covered how artificial intelligence can be a powerful tool for access to justice, and James Sandman, president of the non-profit Legal Services Corporation presented the current state of access to justice—including the humorously disturbing statistic that, in the United States, the amount we spend on legal aid for the underprivileged is less than what we spend on Halloween costumes—for our pets.

Now you may be thinking, “Well, give you and Relativity a gold star—you proved Bob wrong—there was one session out of dozens.”

However, that’s not the point. I learned long ago to be careful when debating Bob Ambrogi.

You see, we had Bob as a speaker on one of our Legalweek sessions, The State of the e-Discovery Union: A Roundtable on the Industry and the Profession. The program was a big hit, and people were waiting in line to get in.

Access to Justice? We presented to a room that was almost empty.

As I lamented the sparse attendance, someone reassured me it was a great session. The theory on why the room was empty?

No one was making any money in that session. Maybe Bob was right. Maybe we were in the echo chamber.

In Defense of Big Law and Big Discovery

Is it all doom and gloom for a tone-deaf profession? We don’t think so.

Was the Access to Justice program a failure because the audience was small? Absolutely not.

After the session, a New York lawyer came up to me asking what she could do to help. I introduced her to Justice Kennedy, who told her about what she could do, and they exchanged information. I suspect someone in New York will get a lawyer—someone who might not have had one without that program.

The Legal Services Corporation faces constant threats to its funding. Another one of those few attendees approached Jim Sandman after the program. This attendee was from a big corporation—not unlike the ones Bob referenced in his articles. Sure, most of his time at Legalweek was probably spent addressing that Big Law audience Bob mentioned—but for one hour of Legalweek, he was hearing about how lawyers and technology can help those who need legal assistance. Perhaps his very large corporation will be jumping in to help address the Legal Service Corporation’s funding crisis.

With a prominent U.S. district judge, a New York State justice, a Starbucks vice president, a university professor who is also one of the world’s foremost experts on e-discovery technology, and the leader of the Legal Services Corporation, I think it’s fair to say that the Access to Justice panel was comprised of the “legal elite” Bob mentioned in his article. But those legal elite spent time preparing and presenting with the hope of helping people. They weren’t getting paid.

As I was graduating from law school, the Big Law firm where I was a law clerk, Crowell & Moring, allowed me the honor of helping in the representation of a Liberian journalist who was seeking political asylum. He had managed to annoy both the Doe and Taylor governments.

Basically, if we lost, this guy didn’t have a prayer in the world.

When the administrative law judge uttered the words that we had established a well-founded fear of persecution, our client turned to me and said, “God will bless you for what you’ve done.”

There is perhaps no feeling in the world like a client telling you that you saved his life. I recommend it highly.

But, I didn’t save that guy’s life. Crowell & Moring did, and that’s the point.

Bob Ambrogi—as he almost always is—was right in just about everything he wrote. My only rebuttal: sometimes Big Law does big things.

How You Can Help Solve the Access to Justice Problem