Celebrating 10 Years of Relativity Fest: A Look Back 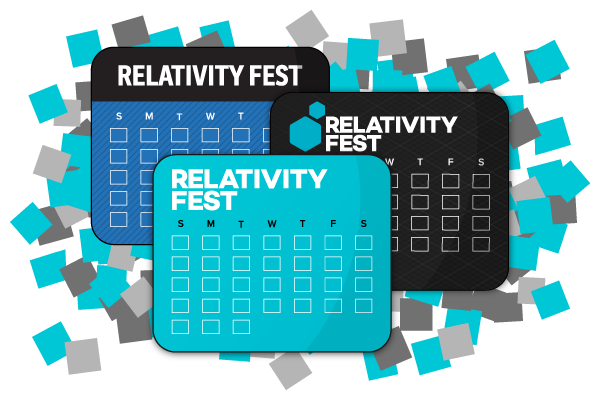 This year, we’re marking the tenth anniversary of Relativity Fest, and the milestone is on everyone’s mind around here. It’s impossible to ignore the buzz that the conference has earned over the last decade(!), and we’re all excited to see everyone come together again in Chicago this October.

Just last week, I was walking around Madison, Wisconsin in a ~vintage~ Relativity Fest t-shirt when someone stopped and pointed to me as he walked in the same direction down the street.

I loved everything about that moment. Really, all the things:

With the session catalog for 2019 now available, and the introductory rate closing next week—which means the event is finally just around the corner—I spoke with several long-standing members of the Relativity community about their memories, feelings, and advice around Relativity Fest and its history.

A common refrain around my colleagues’ thoughts on Relativity Fest was that the years haven’t changed its core mission: bringing together a community of bright minds to deliver game-changing tech lessons and celebrate their successes.

“Every year since the beginning we’ve set out to deliver an event that is community-centric, provides practical and tangible takeaways you can use immediately, and that is genuine in its mission to deliver great programming in a fun and engaging atmosphere,” said Josh Sullivan, senior manager of EMEA marketing, who has been at Relativity for every Fest. “I don’t think any of that has changed. If anything, we’ve doubled down on that mission.”

Without a doubt, the togetherness of Relativity Fest—where professionals of similar and very different backgrounds can collaborate, share, network, and learn—is what sets it apart from other events in our space. But the focus on tangible takeaways for attendees doesn’t hurt, either.

“My personal favorite aspect of Fest’s evolution is the uptick in hands-on opportunities for our attendees,” said Constantine Pappas, senior manager of Relativity solutions at Relativity, who has attended every Relativity Fest except the first. “We have more workshops and self-guided, hands-on exercises every year, and it’s really the best way to learn.”

Susan, who attended her first Fest in 2012, has benefited from the community angle, too: “My current job came out of a friendship I developed at Relativity Fest. My new boss and I had met a few years ago and always stayed in touch,” she explained. “When he became the director of e-discovery at his firm, he reached out to me as soon as he had a position. I wasn’t looking for a job but he recruited me like I’ve never been recruited before! I’ve never felt so valued by a prospective employer.”

She has no doubt about the event’s impact on her career trajectory. “If it weren’t for meeting him at Fest, I really doubt I would have gotten to know him and much less, heard about this position,” she said.

For Kelly Lohan, our senior manager of events, that’s her favorite part of the job: “Seeing the event come to life is rewarding, but witnessing the real outcomes for our attendees is the best part.”

The very first Relativity Fest started as an ambitious idea to get Relativity users in a room to learn more about the product and, more importantly, thank them for their hard work and celebrate their accomplishments in the platform.

“I’d just started working at Relativity when we decided to put on the first Relativity Fest,” Josh recalled. “The team was much smaller, and we weren’t exactly sure how to pull it off, but we knew we wanted to create a great experience for the community—that much as always been true.”

The attendance goal for the inaugural Relativity Fest was a modest 100. (For comparison, last year’s show saw 1,984 attendees—and we’re expecting about 2,000 again in 2019.)

Jay Francisco, manager of channel sales at Relativity and another 10-year Fest veteran, reflected on this growth.

“Nobody really knew what to expect that first year. It’s certainly much different now than it was at the beginning, especially when you look at the expansion and size of it. It’s grown into one of, if not the, most important industry events of the year,” he said.

Long-time team members tend to look back on the early years with nostalgia. It’s hard not to think fondly of those hectic, all-hands-on-deck efforts to put a big show together with a small team.

“Relativity Fest is now one of the biggest conferences in our space, runs like a well-oiled machine, garners some amazing guest speakers, and it feels like we’ve been doing it forever,” Shawn Gaines, our vice president of marketing, shared. “On the other hand, I also remember trying to pull off a 200-person conference and putting together closing keynotes at 4:00 a.m., approximately four hours before those presentations were supposed to be given. I’m excited that we’ve come so far, but sometimes miss the scrappiness.”

But there are perks to being a bigger name.

“The event has become more streamlined and the sessions on the main stage have gotten bigger and better. We’ve also added industry content and professional development sessions, making it way bigger than a user conference,” Shawn went on. “I remember the first year we did the judges’ panel, and Nick Robertson was all, ‘Shawn, get us some judges.’ I did a lot of calling and emailing to land a panel of four impressive names—Judges Waxse, Rodriguez, Fisher, and Peck. They were amazing, and the judges’ panel became a staple of the show.”

And that’s not all: “This year, we actually had submissions for sessions coming from judges—a long way from the days of begging folks to do the show,” he said.

Relativity Fest has become an ambitious, anticipated, and well-loved event over the last ten years. We can’t wait to see what’s next. (More on that next week!)

Taking Charge of Your Legal Education (For Aspiring and Practicing Attorneys)

3 e-Discovery Lessons from 2018 You Should Revisit