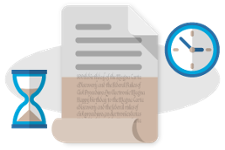 e-Discovery and the Magna Carta: More In Common Than You'd Think

This month marks the 800th anniversary of the Magna Carta, not only one of Medieval England’s biggest contributions to Western civilization, but one of the most important legal documents in history. As Elizabeth II, history professors, various British pubs, and lovers of old legal documents celebrate the big birthday, it has us thinking about how the Magna Carta—like many things—applies to e-discovery, specifically the Federal Rules on e-discovery.

But, before we get into that, what is the Magna Carta? Latin for ‘Great Charter,’ the Magna Carta was a document executed by John, King of England, and English barons on a field at Runnymede on June 15, 1215, in which the king agreed to certain demands of the barons.

It seems unlikely anyone at Runnymede thought they were creating a legal legacy to last 800 years. By most accounts, John wasn’t a nice guy. In fact, many historians believe he’s the only King John in English or British history because he was unpopular, and the Magna Carta was basically a capitulation to the barons to avoid a civil war.

Nevertheless, the result of this deal is a document that helped change the course of history, containing fundamental legal rights—including the right to due process of law. It has served as the inspiration for subsequent proclamations, including the Bill of Rights to the United States Constitution. The Magna Carta’s influence on American law has been so great that the American Bar Association erected a statue to it at Runnymede in 1957.

The Magna Carta never lived in a vacuum, and neither do the Federal Rules on e-discovery. They’re evolving edicts that change over time.

Likewise, the Magna Carta has changed over time. In fact, the copy of the Magna Carta on display at the U.S. National Archives is not a document from the fields of Runnymede in 1215, but one of the remaining copies of the 1297 edition. In addition, of the 63 original clauses of the Magna Carta, only a handful are actual law today.

So even though venerable laws change just as the events that trigger laws change, their influence remains. We may no longer have English barons protesting King John’s taxes to subsidize his military misadventures in France, but we still have the influence of the Magna Carta in laws around the world.

Likewise, we may no longer be in the initial period of revolutionary change as e-discovery moved from Bankers Boxes to electronic media, and the 2006 FRCP e-discovery amendments may not have even lasted a decade, but we still have the influence of the 2006 amendments in state e-discovery rules around the nation and in the upcoming new amendments.

Proportionality in e-discovery has been a contentious issue for years. The rest of the world is often amazed at the broad e-discovery conducted in U.S. litigation, and efforts to make e-discovery proportional to the case in question have been one of the biggest agenda items throughout the process of amending the FRCP.

In the new Fed. R. Civ. P. 26(b)(1) approved by the U.S. Supreme Court and submitted to Congress this April, the formerly broad language, “Parties may obtain discovery regarding any nonprivileged matter that is relevant to any party’s claim or defense…” has been amended to include the limitation, “…and proportional to the needs of the case…” with six factors, including a balancing test, to determine whether a party gets its desired discovery.

However, e-discovery isn’t the only area of the law that has grappled with the problem of proportionality.

In a law review article published last month entitled, Does the Magna Carta Embody a Proportionality Principle?, George Mason University School of Law professor and associate dean Craig Lerner argues that, although the Magna Carta and most legal documents contain proportionality principles, the generally accepted idea that the Magna Carta stands for the principle that the punishment should fit the crime on humanitarian grounds is based on weak scholarship given several factors, including the harsh punishments of the era.

After all, there’s a reason people say, “I’m going to go medieval on that guy.”

The Magna Carta legal lesson for e-discovery here may be that just because we get a new proportionality provision in the Federal Rules doesn’t mean opposing parties won’t go medieval on each other in their discovery requests—despite rulemaking calls for cooperation.

Use It or Lose It

As America’s data centers overflowed with e-discovery evidence, litigants faced a daunting challenge: when reviewing countless mountains of evidence under tight deadlines, it was almost impossible to prevent some privileged information from slipping through the cracks and being produced inadvertently.

Lawyers have few greater fears than the nightmare of blowing the attorney-client privilege by waiving it through inadvertent disclosure. Fortunately, federal rulemakers came up with a way to prevent this disaster with Federal Rule of Evidence 502(d).

Called the e-discovery “Get Out of Jail Free Card” by U.S. Magistrate Judge Andrew Peck, Rule 502(d) allows federal courts to issue orders that privilege or protection is not waived by inadvertent disclosure. In essence, even if you press the send button late one night on a pile of privileged hot docs, Rule 502(d) can save you. The problem—as Judge Peck is often quick to note—is that most lawyers fail to ask for Rule 502(d) orders.

The same holds true for the legal protections enshrined in the Magna Carta. Most of its provisions have gone by the wayside over the years, some with good reason, but nations that have claimed the Magna Carta as a basis of its laws might be well-served by using more of its provisions. Whether it’s human rights in the original Magna Carta or the privilege protections of Fed. R. Evid. 502(d), a protective law is only as useful as it is used.

This 800th anniversary of the Magna Carta has given us the opportunity to remember that whether it’s the evolving nature of rules, proportionality in the law, or even the Get Out of Jail Free Card of Rule 502(d), the legal challenges we face as e-discovery lawyers, paralegals, or technologists aren’t as new as we might think.