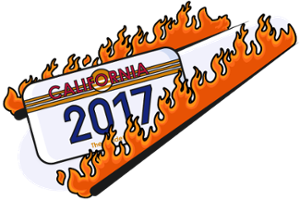 One could argue that 2016 was the year e-discovery started “trending,” with a certain presidential candidate’s emails dominating the news cycle for much of the second half of the year. But the limelight wasn’t the only notable thing about e-discovery this year—new technologies, several high-profile cases, and notable mergers and acquisitions have left many of us wondering what’s next.

As we embark on new adventures in 2017, we talked with members of the profession and the industry about what they think is on the horizon and gathered seven predictions—five things we’ll expect to see in 2017, and two things we won’t.

1. Back to the Future I: Email threading with analytics visualization will become the standard in the industry

Email volumes are exploding as professionals use it as a main form of communication at work (despite premature predictions of its untimely demise). An investigation could include hundreds of thousands—or even millions—of emails. As we all know, email threading significantly speeds review of emails by gathering all forwards and replies (including reply all messages) together so only those with unique content can be reviewed.

What’s different compared to the email threading of yesteryear is the use of analytics visualization. Having a review attorney invest minutes in tracing the genesis of an email through piles of text will continue to give way to simple, user-friendly visualization.

One might ask why a few seconds or even a minute matter in an e-discovery review. Multiply those few seconds by a million documents, and you get your answer. In e-discovery, even seconds matter, and review teams are finding the investment in analytics pays off fairly quickly.

2. Back to the Future II: ECA will find a resurgence

While TAR solves many of the challenges presented by large data sets, over the next year we’ll see attorneys focus more efforts on culling before litigation begins with early case assessment (ECA). ECA allows attorneys to get an understanding of the key facts of their case upfront so they can focus their data set, gain insights sooner, reduce cost, and inform strategy.

Of course, we should remember that the TAR-ECA question is not a zero-sum game. Despite the word “review” in TAR’s name, one doesn’t have to wait until the attorney review stage of e-discovery to use TAR. In fact, sometimes the technologies behind TAR are used for ECA.

“ECA will find a resurgence after years of being the apparent bridesmaid to TAR, as folks—both domestically and internationally—determine that the two technologies aren’t mutually exclusive,” said Dean Gonsowski, vice president of business development at kCura. “In fact, ECA and TAR are similarly enhanced by the deployment of analytics earlier, upstream in the process, yielding valuable insights that can help case teams make more informed decisions across the board.”

With ECA being especially useful for assessing risk and predicting costs prior to litigation—while also being an excellent tool for defensibly eliminating non-relevant data to simplify review downstream—we predict our second Back to the Future development will be the resurgence of ECA.

3. The IoT will come into play

As businesses expand their networks of connected devices, the volume of discoverable data generated by the Internet of Things (IoT) will only expand as well.

“The industry is going to begin to realize how much big data there is out there, created and captured by the Internet of Things, and software is going to begin to address this well of information and figure out how to tap into it,” said Charles Stewart, manager of electronic discovery services at Sheehan Phinney Bass & Green.

Organizations are already struggling to govern and efficiently manage “traditional” electronically-stored information (ESI) such as emails, document files, and social media. The amount of data generated by the IoT is almost unfathomable, and the Federal Rules of Civil Procedure have generally treated all data within the enterprise as potentially discoverable.

Thus, we see IoT as a growing legal consideration in 2017. Organizations that don’t address risks associated with IoT data could find themselves in a costly legal situation one day.

To put it simply, analytics makes the attorney review process much easier, and we’ll see its usage continue to increase in 2017. At our company, we’ve seen our users’ analytics usage increase an impressive 1,500 percent since 2011.

“Our predictions are that firms will continue to move away from linear review and reliance on keyword searches, relying instead on concept searching and other analytical approaches to culling documents,” said Rebecca Schley, litigation project manager at Seyfarth Shaw LLP.

The reasons we’re seeing advanced analytics and TAR finally go mainstream are twofold. First, e-discovery platforms’ user interfaces are becoming more visually appealing. Second, data volumes continue to grow exponentially, and massive data sets will need to be filtered for efficiency. As we’ve said before, all the law schools on the planet couldn’t produce enough lawyers to review the ever-increasing volume of data.

5. More e-discovery will be conducted in the cloud…

Cloud-based e-discovery will gain more traction in 2017 as firms seek to take advantage of the flexibility, scalability, and ease of the cloud. Service providers may choose to refocus resources they spent previously on infrastructure and focus instead on delivering high-value services.

While cloud-based e-discovery tools are certainly gaining traction, we all understand that e-discovery is highly complex and there’s no “one size fits all” offering.

In 2017, we think we’ll start to see more service providers take a hybrid approach, offering both cloud and on-premises e-discovery software so they can meet the unique needs of their customers.

7. 2017 will not be the year of the Maytag Man Magistrate

Since the 2015 amendments to Federal Rules, there have been many predictions—including predictions from prominent federal judges—that the amendments would trigger increased judicial involvement in the e-discovery process.

However, as U.S. Magistrate Judge Peggy Leen has noted, magistrate judges are busy people. Personally, I think it would be great if magistrate judges were more involved in the discovery process. However, with tight budgets for staffing and huge caseloads, I’m not sure they have the time.

In Mazzeo v. Gibbons, Judge Leen wrote astutely on the subject of magistrate judges’ involvement in the e-discovery process when she said, “A magistrate judge is not the Maytag repairman of federal judges desperately hoping for something to do.”