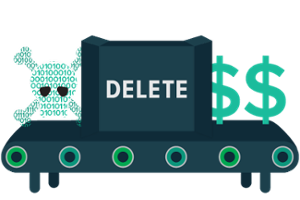 Editor’s Note: The author of this post, kCura’s David Horrigan, was counsel at the Entertainment Software Association, which has been involved in the copyright issues discussed in this post.

One of the more contentious points of debate over last year’s e-discovery amendments to the Federal Rules of Civil Procedure was the move to change the sanctions provisions of Rule 37(e).

The new Rule 37(e) requires a spoliator to have an “intent to deprive” another party of the use of the destroyed evidence in litigation for the most severe sanctions to apply.

Tweaking a primary judicial tool for sanctioning subversive spoliators caused some consternation. On the other hand, many argued the old rule caused needless data preservation, driving up costs for everyone.

A decision this month interpreting the new Rule 37(e) by a federal district court in Virginia may support the arguments of both sides. BMG Rights Mgmt. LLC v. Cox Comms., Inc., No. 1:14-CV-1611 (E.D. Va. Aug. 8, 2016) provides a tale of alleged music pirates, your cable company, the new Rule 37(e), and a $25 million verdict upheld despite intentional spoliation.

In the technological days of yesteryear known as the late 1990s, a pre-iTunes era meant peer-to-peer file sharing was a popular way to obtain digital music for free.

However, copyright owners claimed peer-to-peer users were committing copyright infringement and stealing their content. They argued one couldn’t just walk into a store and take anything for free. Why should the digital world be any different? With a reference to swashbuckling villains of the high seas, the activity became known as digital piracy.

As the new millennium began, a legal debate ensued between copyright owners and their representatives—such as the Recording Industry Association of America (RIAA) for the music industry, the Motion Picture Association of America (MPAA) for the film industry, and the Entertainment Software Association (ESA) for the video game industry—and peer-to-peer users and their defenders, such as the Electronic Frontier Foundation (EFF), which called the copyright owners’ legal efforts an “irrational war” that threatened innovation.

After the copyright owners prevailed at the U.S. Supreme Court in Metro-Goldwyn-Mayer Studios, Inc. v. Grokster, Ltd., 545 U.S. 913 (2005), some peer-to-peer file sharing services closed. But sharing—or piracy, depending on perspective—continued, and one of the most prolific methods has been BitTorrent, a protocol that allows users to download portions of a single file from multiple users.

With the daunting challenge of pursuing copyright infringement actions against users across the globe, copyright owners sought an easier target: the internet service providers (ISPs) that made file sharing possible. In an effort to strike a balance between the copyright owners and the ISPs, Congress passed the Digital Millennium Copyright Act (DMCA), which provided copyright liability protection for ISPs that agreed to terminate service for repeat infringers.

Like other cable companies, Cox Communications is also an ISP, providing internet service to about 4.5 million customers. BMG is a music publishing company that owns and administers music copyrights.

As part of its copyright enforcement efforts, BMG retained Rightscorp Inc. Rightscorp monitors BitTorrent by recording the IP addresses of alleged infringers, along with other data, and forwards the information to ISPs for further action.

Rightscorp caused some controversy by including settlement offers in its notices. BMG liked the process because it educated alleged infringers and raised revenue for enforcement efforts, but Cox believed it was extortionist and noted that a notice alone didn’t establish infringement. Thus, Cox “blacklisted” Rightscorp, having its system delete automatically Rightscorp’s email notices—about 1.8 million of them.

Rightscorp also sent Cox letters about alleged repeat infringers. Cox’s privacy counsel said one of these letters identified a single IP address as having infringed 60 times in one minute—an impossible feat for even the most sophisticated pirate.

Both sides filed post-trial motions. Cox based one of its arguments on what it called the court’s “anemic” spoliation instruction, and its refusal to impose evidentiary sanctions based on BMG’s failure to preserve some evidence of how Rightscorp’s system operated.

Neither the magistrate judge nor the district judge in the case disputed that BMG was an intentional spoliator. The court observed that BMG had a duty to preserve evidence about the manner in which Rightscorp identified suspected infringement, but that by altering portions of the source code, material information was intentionally destroyed—not lost by mistake.

Despite this intentional spoliation, the magistrate judge rejected Cox’s call for dismissal and preclusion of evidence because there were “other potential avenues available to understand and test the accuracy of Rightscorp’s system.” Instead, the magistrate judge issued an order recommending a jury instruction about the spoliation.

Cox moved for dismissal based on the magistrate judge’s order. Not only did the district judge deny that motion, he watered down the language of the proposed jury instruction, telling jurors that they “may, but are not required to” consider it rather than the magistrate’s language that they “should.”

The court noted that the new rule provides that a court may “order measures no greater than necessary to cure the prejudice” and that Rule 37(e)(2) requires an “intent to deprive another party of the information’s use in the litigation” for the most severe sanctions of dismissal or an adverse inference instruction.

The court also cited the Advisory Committee notes to Rule 37(e)(2), which provide “the remedy should fit the wrong, and the severe measures authorized by this subdivision should not be used…when lesser measures such as those specified in subdivision (e)(1) would be sufficient to redress the loss.”

In addition, the court rejected Cox’s argument that Fourth Circuit case law required a harsher sanction, citing Turner v. United States, 736 F.3d 274 (4th Cir. 2013) for the proposition that district courts have “broad discretion” in imposing sanctions where spoliation occurs. It added that “dismissal is reserved for only the most egregious circumstances” and that preclusion of evidence in this case would be tantamount to dismissal.

Why the BMG-Cox Piracy Dispute Matters

Whether you like or dislike the new Rule 37(e), this case is probably an excellent example of your predictions coming to fruition.

For those who favored the new rule, BMG represents a well-reasoned, measured approach to address spoliation. Sure, there was intentional spoliation here, but there was no indication BMG or Rightscorp destroyed the evidence as part of a nefarious plot to keep it away from Cox.

On the other hand, for those who opposed the new Rule 37(e), BMG may represent their worst nightmare: an intentional spoliator gets to destroy evidence and walk away with a $25 million verdict.

When the U.S. Senate Judiciary Subcommittee on Bankruptcy and the Courts had its November 2013 hearing on the new rules, Changing the Rules: Will Limiting the Scope of Civil Discovery Diminish Accountability and Leave Americans without Access to Justice?, a battle between two corporate titans wasn’t at the top of the agenda. Still, BMG goes to a point made by former U.S. District Judge Shira Scheindlin.

In criticizing an earlier draft of the amendments to Rule 37(e) in Sekisui Am. Corp. v. Hart, 945 F. Supp. 494 (S.D.N.Y. 2013), Judge Scheindlin wrote, “imposing sanctions only where evidence is destroyed willfully or in bad faith creates perverse incentives and encourages sloppy behavior.” There’s probably little doubt that, in many instances, intentional spoliation—even without intent to deprive the other side of evidence—constitutes “sloppy behavior.”

Of course, as we’ve noted before, judges have other tools at their disposal to sanction spoliators. Nevertheless, BMG may be a sign of the times under the new Federal Rules.