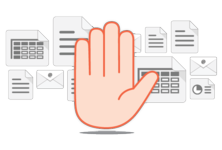 Raising Objections to the Format of ESI Productions: Do it Early and Do it Clearly

Editor’s Note: Co-authored by Lawrence Bice and Jennifer Castaldo from Larimer Law and originally published on the Daily Record, we discovered this article on D4’s Discover More blog and appreciated its thorough insight. Take a look at D4’s posting for the full text and its source materials.

When analyzing an opponent’s discovery demands, it is always important to focus not just on the substance of the information demanded but on the format in which the demanding party wants the information to be produced. As discussed below, clearly objecting to an opponent’s demand that ESI be produced in a particular format and raising those objections in a timely fashion, is paramount.

It is important to consider ESI format when requesting and producing ESI during the discovery phase of litigation.

The format in which discoverable material is sought and produced is important when it comes to ESI such as emails, texts, and electronic copies of documents. One of the basic issues to consider is how metadata is treated.

Metadata is often described as “information about information.” It is the data associated with an electronic file that describes things like how, when, and by whom it was collected, created, accessed, modified, or formatted. While certain metadata fields are typically produced in electronic document production, practitioners should take care to understand what exactly has been requested for production, and what they will be producing. Metadata can include information that is readily accessible to the viewer of the document, such as the date of creation and the identity of the author, but may also include a large amount of information that is ordinarily hidden from view, a good deal of which will be irrelevant. Sometimes, such metadata may contain information that is particularly sensitive or even privileged.

When ESI is produced in “native format,” it is produced to the demanding party in the same electronic format in which it existed in the hands of the producing party. For example, a spreadsheet created in Excel would be produced in its “native” format by simply providing the Excel file to the demanding party, who in turn would access the file by opening it in Excel. A document produced in native format will usually include all the metadata attached to the document.

Alternatively, ESI can be produced in modified electronic formats, such as “load files” or “image files.” Sometimes, when documents are produced in load file format, only certain metadata are included. The type of metadata included with a load file is sometimes negotiated at the outset of discovery.

What happens if the parties cannot agree on the format of the ESI?

Federal Rule of Civil Procedure 34(b)(2)(E) specifically addresses the production format of ESI: (E) Producing the Documents or Electronically Stored Information. Unless otherwise stipulated or ordered by the court, these procedures apply to producing documents or electronically stored information:

Federal Rules of Civil Procedure 34(b)(2)(B) and (D) provide that if the producing party objects to the ESI format requested by the demanding party, the producing party must: (1) state its objection with specificity; and (2) must state the alternative format it intends to use.

Unless a different timeframe is stipulated to by the parties or ordered by the court, the producing party must object to the ESI format specified by the demanding party: (1) within 30 days of being served with the discovery demand; or (2) within 30 days of the parties’ first Rule 26(f) conference, if the demanding party delivers an “Early Rule 34 Request” to the producing party.

If, after the producing party has raised an objection and the demanding party is not satisfied with the alternative format suggested, the parties must meet and confer under Rule 37(a)(2)(B) to try to resolve the matter before the demanding party files a motion to compel.

A party who neglects to timely and clearly object to a party’s demand that ESI be produced in a particular format risks waiver of its objections, as illustrated in a recent case (Morgan Hill Concerned Parents Association v. California Department of Education). On the flipside, if a demanding party is not careful, its own actions may operate against waiver.

By raising objections to the format of ESI early and clearly, and before the parties have produced documents, the producing party will be best positioned to prevail. This will also ensure that objections are raised and resolved early on.

In Morgan Hill, Plaintiff alleged that Defendant violated the Individuals with Disabilities Education Improvement Act, 20 U.S.C. §§ 1400 et seq. by failing to provide a “free appropriate public education” to children with disabilities. Plaintiff demanded that Defendant produce ESI in its native format with all metadata attached. Although Defendant objected to nearly all of Plaintiff’s other document demands, it did not object to the instruction that ESI be produced in native format. Defendant also neglected to propose an alternative ESI format. Ultimately, Defendant produced 29,000 documents, not in the native format specified by Plaintiff, but in a load file format without all metadata attached.

Plaintiff subsequently moved to compel Defendant to produce the emails in native format. Defendant argued it had already produced the ESI in “industry standard load format” and that reproducing the documents with metadata would be burdensome. The Court found that Defendant failed to point to any authority establishing a specific load file format as the industry- or court-approved standard for document production. Citing Rule 34(b)(1)(C), which provides that a demanding party is entitled to specify the format of ESI, the Court also rejected Defendant’s argument that “a requesting party cannot demand production in one format versus another just because one would allegedly ease a party’s review process.”

Once Plaintiff specified its desired ESI format, it was then up to Defendant to raise an objection and propose an alternative ESI format within the timeframes established by Rule 34(b)(2)(A), which Defendant failed to do. The court found that Defendant only first raised an objection, “of sorts,” to Plaintiff’s desired ESI format in a letter dated August 26, 2016, more than three years after Plaintiff served its document demands on Defendant. Additionally, Defendant failed to propose an alternative ESI format, as required by Rule 34(b)(2)(D). Consequently, the Court found Defendant’s August 26, 2016 purported objection to be “untimely and separately, not a valid objection under Rule 34(b)(2)(D).”

Although the Court held Defendant’s August 26, 2016 letter to be an untimely and invalid objection to ESI format, the Court nonetheless held that an “outright waiver based solely upon timeliness of the objection [was] not warranted” because Plaintiff: (1) failed to argue in its Motion to Compel that Defendant had waived any objections to format; and (2) attached to its Motion to Compel correspondence with Defendant in which Plaintiff conceded it had previously agreed to waive native format for the emails. However, because Plaintiff had made its concession during negotiations and at all other times had consistently insisted on production in native format, the Court found that Plaintiff did not waive its right to seek production of ESI in native format.

Ultimately, the Court granted Plaintiff’s Motion to Compel. The Court rejected Defendant’s argument that it would be too burdensome to re-produce 29,000 documents in Plaintiff’s desired native format, as any inconvenience to Defendant was of Defendant’s own making, namely for failing to object to native format ESI in the manner set forth in Fed. R. Civ. P. 34.

For the party seeking to compel production of ESI:

4 Sources to Search for a Digital Smoking Gun

3 Production Headaches and How to Cure Them