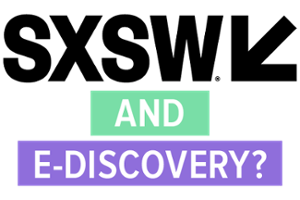 Every March, there are two great migrations to Austin, Texas. The first is the arrival of the city’s huge Mexican free-tailed bat colony, which spends the summer and fall living, breeding, and hunting in and around the Congress Street Bridge. When the colony’s newborn bat pups take wing in August, more than 1.5 million bats share the skies above the capitol city.

The second migration is generally considered to be much weirder. March in Austin also means South by Southwest, which for nearly 30 years has gathered the world’s finest creative minds in technology, music, and film to discuss wicked problems and innovate solutions across industries. The festival has been a launching point for apps like Twitter and Foursquare and hosted talks by tech developers and world leaders, including a 2016 appearance by Barack Obama.

This year, SXSW Interactive—the conference’s multimedia and technology track—featured a robust slate of panels and sessions dealing with open data access and review—providing several takeaways for e-discovery enthusiasts like you.

Takeaway #1: Open data sets can change the world, if we share and review them together.

Long lines are a norm at SXSW, but the queue was thousands strong to see former Vice President Joe Biden discuss the Cancer Moonshot initiative and his personal efforts to combat the disease. One of the major obstacles in cancer treatment that Biden discovered as VP was the inability of government agencies, hospitals and clinics, and patients to share data with one another.

One major success he encountered was the opening of the National Cancer Institute Genomic Data Commons to the public, which now allows researchers and clinicians to share and contribute their own data.

“The hope is there will be tens of thousands more patients increasing the commons, hopefully exponentially, and we'll have more data able to be examined to unlock some of the secrets this dreaded disease hides,” Biden said.

Biden’s call to develop a culture and protocols that allow for the sharing of open data was echoed in the panel It’s Time to Ask More of Open Data, which included representatives from the Department of Health and Human Services, the US Census Bureau, and NASA. The panelists discussed how their agencies are bringing diversity to data jobs, encouraging open innovation, and coordinating open data sharing across agencies.

The panelists acknowledged what e-discovery professionals know too well: data security is monumentally important and not all information can or should be shared. But, for those cases where it can be made publicly available, there’s an opportunity to bring in tools and ideas from the private sector to make review, analysis, and presentation more effective.

“We’re aware that taxpayers pay for exploring the universe,” said Beth Beck, NASA's Open Innovation Program Manager. “The universe gives us data back and figuring out the return on investment is up to all of us.”

Takeaway #2: Biometric data is here and we should think about its impact.

Biometric data—you know, all those stats your FitBit collects—was one of the hottest buttons at SXSW Interactive. In sessions dealing with everything from public health to constitutional law, panelists and speakers grappled with how to manage the proliferation of biometrics.

For public health officials, good biometric data can change the health care landscape. For example, it has historically been difficult to get accurate self-reported information about drinking habits. But if a wearable recognizes the effects of drinking, that data, used as part of a larger set, can shed light on how to design and promote public health initiatives around alcohol.

Of course, with wearables collecting your heart rate and security cameras passively tracking things like height and gait, biometrics present new legal challenges. Two panels, Get a Warrant: The 4th Amendment and Digital Data and Are Biometrics the New Face of Surveillance?, tackled this problem.

In the former, Mike Godwin, attorney and author, discussed how many jurisdictions consider biometrics public data, as anyone can see you when you walk in a room. Law enforcement has already followed this line of thinking to conduct investigations using such data.

The problem is that there is little transparency about when and how biometric data is collected, who has access to it, and how it could one day be used in litigation or prosecution.

“It’s great that you are using photos of missing and exploited children to find them, but are they also retained for law enforcement purposes? We can’t know unless there’s transparency,” said Cory Doctorow, the noted blogger and internet thought leader who served on the latter panel.

These panels tried to navigate the balance between the potential successes and challenges in this new frontier. What became clear, however, was that data pros should start paying serious attention to biometrics.

Takeaway #3: e-Discovery is top of mind for policy organizations—even if they don’t know it.

To cap off the open data and government access talks at the center of the conference, FBI General Counsel James Baker joined Newseum CEO Jeffrey Herbst for a keynote conversation about privacy and security. In a surprise for all e-discovery fans in the audience, Baker fielded a question about how the bureau stays current with e-discovery capability and technology.

“It’s a very complicated enterprise and we need to make sure it’s done well,” Baker said, pointing to the suits against the FBI and forensic data investigations that are his everyday businesses.

According to Baker, the amount of data the FBI needs to review on a day-to-day basis is quite substantial, and they can often rely on technology to achieve results that are consistent with the law and FBI policy.

Many government workers serving on panels repeated the concern that their data review process could take months, or even years. While some government agencies understand why they need e-discovery, others in the US and abroad might not realize that powerful tools for data review and analysis are readily available.

Trying to see every great SXSW panel is a daunting task that could drive anyone batty. Luckily, panelists are committed to continuing the conversation once the conference has ended. Attendees from around the world will go back to their organizations with a better understanding of how their work fits into a larger picture.

For companies that deal with the review and analysis of data, there are some real problems to solve in the political, social, legal, and technological spheres. The call to solve them, however, has been made in a very public venue with a wide variety of tech minds listening closely—simply because we all thought Austin was a pretty great place to meet up.

Dan Waidelich is a member of the public relations team at Relativity.