TAR Around the World: Next Stop, Australia 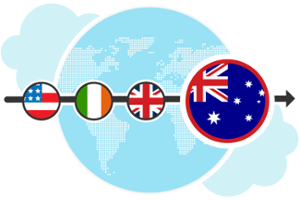 There is little doubt that technology-assisted review (TAR) has made itself known throughout the world. With case law in the United States and Europe marking its defensibility, and headlines plastering industry media sources on a still-regular basis, there’s simply no way to avoid it. TAR is here to stay.

What’s more encouraging than continued success in these established regions, though, is the technology’s emerging success in other parts of the world. In the last few months, Australia has added its name to the roster of TAR-friendly nations. This week, a formal Practice Note issued by an Australian federal court further validates the technology’s use by case teams who are seeking smarter ways to tackle massive data sets.

To get some perspective on this news, we sat down with Stuart Hall from our international team and David Horrigan, our e-discovery counsel and legal content director.

Sam: Stuart, what is your role at kCura?

Stuart: I’m on kCura’s Asia-Pacific team, within which we manage all aspects of our business across the Asia-Pacific region. Along colleagues such as Luke Balloch (Melbourne) and Abigail Cooke (Hong Kong), I help drive new business acquisition and growth but, more importantly, support our existing customer base to upskill and expand their use of Relativity throughout the region. Our team also delivers feedback from this region to our development team to ensure these customers’ needs are addressed in our product roadmap.

Tell us more about this TAR story coming out of Australia.

Well, it’s been a hectic few months in Australia on the TAR front. Two cases of significance emerged in the courts late in 2016. The first is from the Federal Court of Australia in Money Max Pty Ltd v QBE Insurance Group Ltd VID 513/2015, in which the Court has ordered the respondent to detail their workflows around the provision of discovery, having already used TAR.

The second and even more significant is McConnell Dowell Constructors v Santam Ltd Ors 2016 VSC 734, in which Justice Vickery has approved the use of technology-assisted review, citing a number of cases internationally. He’s even gone further, saying that in the future, the court may choose to order discovery by TAR whether the parties consent or not.

It seems like an appropriate forerunner to the introduction of a new Practice Note—SC Gen 5 – Guidelines for the Use of Technology—which went live this week in the Supreme Court of Victoria. This Practice Note spells out a number of acceptable TAR methodologies, as well as other suggestions around the sorts of things parties should consider around what goes into, what comes out of, and what other culling techniques are employed in a TAR project.

What excites you most about these developments?

I’m excited for a number of reasons, the first being that I’m proud to see Australian practitioners and the court taking a lead role in this area. I may not have examined all the relevant protocols for exchange globally, but the Supreme Court of Victoria’s Practice Note seems extremely progressive and is addressing a changing landscape for provision of electronic files to the court.

We have been on the precipice of a TAR revolution in Australia, having watched the US transform with Judge Peck’s Da Silva Moore and Rio Tinto cases, to then seeing the first international case with the Irish Bank decision. Pyrrho in the UK (where Relativity Assisted Review was used) seems to have finally tipped the balance sufficiently and created a path for the most recent case law and subsequent Practice Note in Australia.

Ultimately, this progressive approach benefits all of us in the e-discovery industry and brings into sharper focus the technology offerings that service providers, law firms, and corporations are adopting. It gives me even more confidence in the work we have done to date.

Whilst the Practice Note doesn’t expressly mention analytics, it does contemplate other offerings that would also work in tandem with TAR. This presents a number of opportunities to make use of email threading, near-duplicate detection, and clustering, as well, with full support from the federal courts.

What does this mean for the market in Australia and APAC generally?

I think it creates significant opportunities for leaders—both in practice and in thought leadership—to emerge. Creating a mainstream culture around these tools will help encourage case teams who are newer to analytics technology and the TAR process, drive increased discussion around TAR in the market, and continue to evolve practices and procedures for addressing the data volumes that are growing just as quickly here as they are in the rest of the world.

It also means the bar has been raised for not only the Federal Court of Australia (who are currently revising their Practice Note), but also courts throughout Hong Kong, Singapore, New Zealand, and southeast Asia. So we pass the baton on to our learned e-discovery colleagues throughout Asia Pacific and hope to see the evolution continue throughout our region.

David, what does this development mean for TAR generally?

David: Money Max and McConnell Dowell are significant because it adds Australia to the list of nations approving the use of TAR in e-discovery. Australia join the United States, Ireland, and the United Kingdom in the judicial approval of TAR. In addition, although it was not a judicial approval, Canada’s Competition Bureau allowed the use of TAR in an antitrust matter.

Another significant Australian development is the Victoria Supreme Court’s Practice Note. In it, the court provides, “In larger cases, technology-assisted review will ordinarily be an accepted method of conducting a reasonable search in with the Rules of Court." The Practice Note includes guidance on proper TAR protocols.

Thus, we now have four nations approving TAR in either judicial decisions or administrative guidance. TAR is on its way to becoming commonplace around the world.