The Best of ILTACON 2016: Our Favorite Quotes from the Speakers 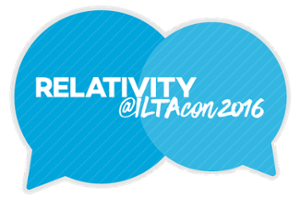 We’ve spent the week at the International Legal Technology Association’s ILTACON 2016. With about 200 educational sessions and approximately 1,500 attendees, the conference provided some excellent quotes about the state of legal technology in 2016.

As we did for Legaltech 2016, we’d like to bring you some memorable moments from the ILTACON 2016 sessions we presented or covered in another edition of Our Favorite Quotes from the Speakers.

Attorney and co-founder of Broadli Inc., on the obsession with non-disclosure agreements:

“I’ve had firms wanting me to sign an NDA before talking over a cup of coffee—and the information wasn’t even that great."

Futurist at ILTA and retired strategic innovation partner at Bryan Cave LLP, on attorney psychology and the tort lotto:

Attorney, author, and ESI special master, on the current landscape:

“From an evidence perspective, this is the best time in history to be an attorney.”

Founder and CEO of Brainspace Corp., on artificial intelligence:

“I think a sense of Darwinism will happen with AI—if you don't have it, you'll fall behind.”

And on concerns about artificial intelligence (in a facetious rebuttal to AI doomsayers):

“Some day we’ll submit to our robot overlords.”

“When you hear some American attorneys complain that EU data protection laws stand in the way of honest lawyers trying to collect litigation documents, take them to a row of glass screens a few yards from the Brandenburg Gate where the fates of gypsies, Jews, and others are recorded, and show them why we in Europe are concerned about the collection of personally identifiable information.”

Attorney/consultant, on the business application competence of younger generations:

“Just because you’ve had a computer since you were in utero doesn’t mean you know how to use Excel.”

Attorney and CEO of Legal Executive Leadership LLC, on outsourcing:

“Consider it a method for getting the best use skills—not the ghetto where you send stuff you don’t want to do.”

Attorney and founder of Ari Kaplan Advisors, on security vulnerability:

“Human behavior is the greatest cybersecurity weakness for law firms and corporations.”

Professor at Chicago-Kent College of Law, on lawyers and numbers:

“There is an almost pathological numerophobia among lawyers.”

And on lawyers and email:

“How many people write emails they shouldn’t—even lawyers? And they should know better.”

And an audience member to Dan Katz on the value of ILTACON Q&A:

“This is great; it’s much cheaper than hiring you.”

Attorney and director of industry relations at Avvo, on information governance:

And on legal education:

Founder and CEO of NexLP, on artificial intelligence:

“The challenge now for Alexa: does ‘Chicago’ mean the Bears or the band?”

“My local grocery store finally changed its Express Lane sign from ‘15 items or less’ to ‘15 items or fewer.’”

Partner at Ballard Spahr LLP and former cybercrime coordinator for the U.S. Department of Justice, while holding up his mobile phone:

“This is a witness—and it has a long and almost perfect memory.”

“It’s one thing to cut costs in one case, but what if you’re a pharma or tobacco company with multiple litigation matters? Technology can help you fill all the buckets without having to go to the well again and again and again.”

CEO of PayneGroup, on information governance:

“It’s a problem when you go into the restroom and find a USB stick labeled, ‘HR’ or ‘Payroll.’”

“Ten custodians may be relevant and proportional, but you can usually get all you need from the first three or four.”

And on e-discovery delays:

“If you seek 18 months for discovery, the court is likely to ask, ‘What are you smoking?’ At least the plaintiff should want to get to trial.”

“Guess where predictive analytics is used the most? The NFL.”

Futurist and CEO of Tomorrow, on email:

“When has BCC been used for anything other than pure evil?”

And on the future:

“Your children will be the first generation raised partly by artificial intelligence.