The Best of Legaltech 2016: Our Favorite Quotes from the Speakers 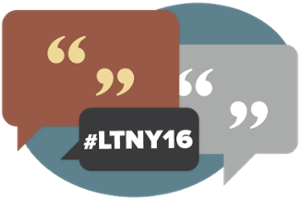 One of the great things about Legaltech is the collection of knowledgeable—and often entertaining—speakers sharing their expertise with attendees. Entertaining? Legal technology? Really?

Yes, really. After covering three days of sessions and moderating a couple of panels, we found ourselves laughing on multiple occasions. Not only that, as we do at every Legaltech, we learned a few things.

We wanted to ensure you didn’t miss out on any of these enlightening quips, so we are offering a collection of quotes from the sessions we covered or moderated. We hope you learn a few things, and maybe even enjoy a good laugh. Here’s the best of Legaltech 2016:

“The best way to protect data is not to have it in the first place.”

Jason R. Baron, counsel at Drinker Biddle & Reath LLP, co-chair of the IGI, and former director of litigation for the U.S. National Archives and Records Administration, on the clarity of lawyers:

“Lawyers love ambiguity and subjective clauses; the point of law school is to produce people who work in ambiguities.”

And on fun, entertaining reading:

“I’m sure everyone wakes up thinking of the Federal Records Act.”

“Don’t do anything on social media if you’ve had more than three drinks.”

And on the need to bring legal services to the underserved:

“About 90% of people in foreclosure don’t have a lawyer—and the banks always do.”

Barclay Blair, founder and executive director at the Information Governance Initiative (IGI), on the software-services symbiosis:

“It’s easy to drop $25 million on software; it’s much tougher to get into the mud and deal with this stuff.”

“If everyone kept less crap in the first place, we’d have less of a problem.”

And on the Safe Harbor Framework:

“The Safe Harbor was never some sort of magic fairy dust that one could merely sprinkle on data to make everything okay.”

“We should remember that these jurisdictional issues existed when it was only paper. The cloud merely makes them bigger.”

“Opposing parties should confer and dance ‘Geek to Geek.’”

“Cooperation doesn’t mean you have to be a marshmallow—you can still zealously defend your clients.”

And he encouraged attorneys to keep things in perspective:

“Lawyers, remember, the world will end only once—and it’s unlikely to happen over your case.”

Ari Kaplan, founder of Ari Kaplan Advisors, on the peril of children and social media:

“The new form of social media bullying is posting a photo on Facebook and tagging everyone but the victim.”

“With both e-discovery and technology-assisted review, isn’t it all about ‘trust, but verify’?”

John Loveland, Managing Director at Consilio, on keeping too much data:

“In the University of Maryland data breach, 90% of the compromised data were on students who hadn’t been there in over 10 years.”

Edward McAndrew, partner at Ballard Spahr LLP and former cybercrime coordinator for the U.S. Department of Justice, on Apple Watches and other wearable tech:

“Wearable tech—or as we used to like to call them in the government, ‘wearable trackers’—are a big privacy issue.”

And Ed warned us it’s not just wearable tech:

“I’m a hawk on data deletion. It’s got to be done or we’ll be a nation full of servers.”

“Four years from now, I predict lawyers who are hesitant to use TAR will be using it—if only because there will be newer, better technology they should be using.”

And because Judge Peck was on a roll, we include:

“Some people fear judicial discretion … I do not.”

Chris Pogue, senior VP at Nuix, on the frequency of cyber attacks:

“Hackers are not like Santa Claus—they don’t come only once a year.”

“Criminal matters have big data privacy issues. When the FBI comes knocking, it’s too late … and they don’t usually knock.”

“The government is like a battleship. It’s very hard to turn—especially with technology.”

Judy Selby, partner and co-chair of information governance at Baker Hostetler, on employee control of data:

“Discretion may be good for judges, but it’s not for employees with data.”

Amie Taal, VP of security and investigations at Deutsche Bank, on differing views of data privacy:

“Europeans are very anal—in a good way—about data privacy. It’s sort of like the way Americans feel about guns.”