The Best of Legaltech 2017: Our Favorite Quotes from the Speakers 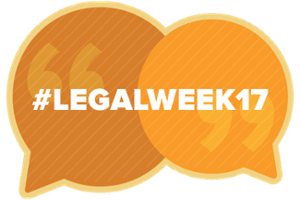 Legaltech and Legalweek 2017 are in the books. As it has been for years, the conference was one of the largest in legal technology, with approximately 10,000 attendees.

As always, we covered many of the sessions, and you can find archives of our live tweet coverage here.

To give you an even quicker read and a feel for the law, technology, and humor that is Legaltech, we continue our tradition of bringing you The Best of Legaltech: Our Favorite Quotes from the Speakers.

“Computers are going to take over certain legal tasks—the practice of law will focus more on advice.”

“As computational technology and artificial intelligence matures, more people will be able to have better access to justice.”

“When I teach Katz v. United States, I’ve realized that most of my law students don’t know what a phone booth is.”

“I think both the Supreme Court and lawyers will be more important in the next few years than in any time in US history.”

“If companies have hitherto lacked an ROI for information governance, the GDPR provides many reasons for knowing what data you have, and for disposing of data which either offends the Regulation or makes it harder to comply with it.”

Commenting on the limits of planning: “A great American philosopher, Mike Tyson, once said, ‘Everyone has a plan until they get punched in the face.’”

“Big Law will finally start to go big in the cloud.”

“It doesn’t take a PhD in 20th Century history to know why data privacy is a fundamental right in the European Union.”

Commenting on the future of the e-discovery industry: “We’re going to be closer to becoming consultants.”

“The financialization of the law will be a dominant vector over the next decade.”

“If you can agree on ESI protocols, you’ve gone a long way to avoiding trouble.”

“How does a chess Grandmaster say he can beat a computer in a chess match? Bring a hammer.”

“In order to succeed, the legal industry needs to get off the dime and embrace diversity.”

Commenting on phishing attacks: “About 20 percent of people will give up credentials—if you have 70,000 employees, that's huge.”

“Does proportionality in e-discovery trickle down to preservation?”

[Lawyers telling opposing counsel]: “Just giving me the 50 documents that are going to be my trial exhibits doesn’t work in e-discovery.”

Commenting on Fulton v. Livingston Fin. LLC: “It’s kind of hard to sanction litigants for using the old Federal Rules when we judges are doing it ourselves.”

“Proportionality in e-discovery may be in the eye of the beholding judge.”

On how the proportionality debate is more complex than some may think: “Proportionality in e-discovery is about more than merely the amount in controversy.”

“Five is not a magical number for e-discovery custodians—it depends on the case.”

“The best thing for e-discovery would be to make all devices company-owned, but that’s unrealistic in 2017.”

What were your most memorable takeaways from this year’s Legaltech conference? Let us know in the comments or @kCura on Twitter.