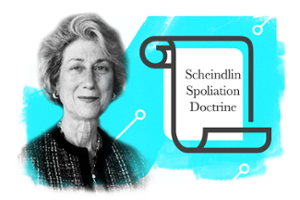 For a legal specialty that is comparatively new and still somewhat niche, e-discovery law has produced an impressive number of outstanding jurists who have made improving electronic discovery an important part of their jurisprudence.

From Judges Fischer, Peck, Rodriguez, and Waxse, who educate legal professionals at Relativity Fest, to the impact of rulings by Judges Facciola, Francis, and several others, these judges who “get” e-discovery have helped shape the law.

Perhaps no jurist has had a greater impact than the Honorable Shira Scheindlin, U.S. District Judge for the Southern District of New York, who will retire from the bench later this month. As we’ll discuss in this post, “Scheindlin on Spoliation” has been a giant force for the e-discovery bar, influencing a generation of judges and lawyers over the past decade and a half.

Whether one agreed or disagreed with Judge Scheindlin’s holdings—in e-discovery or her major decisions in other areas of the law—there is little debate about her influence on e-discovery law: It has been profound.

We thought we would take the occasion of Judge Scheindlin’s retirement to examine her career on the bench, how it’s shaped e-discovery, and what her influence means for the future of e-discovery.

From Prosecutor to Stop-and-Frisk

When President Bill Clinton nominated Shira Scheindlin to become a federal district judge in 1994, he wasn’t exactly putting a staunch liberal on the bench. After all, in addition to having been a partner at a major law firm, Sheindlin was a former federal prosecutor.

Over her 22 years as a federal judge, Scheindlin presided over several noteworthy cases outside of e-discovery—perhaps most notably the very contentious matter, Floyd v. City of New York, known commonly as the NYPD Stop-and-Frisk case, where Scheindlin held the New York Police Department’s stop-and-frisk policy was unconstitutional.

One of the more controversial aspects of the case was that, not only did the U.S. Court of Appeals for the Second Circuit stay Scheindlin’s order for remedial measures in Floyd, it ordered her removed from the case. The appellate court believed Scheindlin’s conversations with the media gave the appearance of bias, a charge the judge denied.

Some of her other cases of note include a prosecution of John A. Gotti, and Maurice Clarett’s challenge to the National Football League (NFL)’s draft rules. Scheindlin ruled for Clarett, holding the NFL’s draft rules violated antitrust law, but the Second Circuit reversed her on that one, too.

As we’ll find in our examination of Scheindlin’s e-discovery jurisprudence, the judge was not afraid to take controversial—some would argue, brave—positions, and the Second Circuit wasn’t shy about reversing her from time to time.

When observers discuss the beginning of the astronomical growth of the e-discovery industry, they often point to the 2006 e-discovery amendments to the Federal Rules of Civil Procedure. It’s a fair observation.

However, discussing the Federal Rules amendments as a trigger to the e-Discovery Revolution without discussing Judge Scheindlin’s series of decisions in Zubulake v. UBS Warburg, LLC is like examining the engine of a car without looking at the spark plugs.

There are two urban legends about Judge Scheindlin that are not true. One is that she is related to “Judge Judy” Sheindlin of television fame (or infamy, depending on one’s perspective). She’s not.

Team Zubulake found it odd that the UBS production had only slightly over 100 emails. In e-discovery, requesting parties often feel producing parties just aren’t producing enough stuff. The productions often seem light. However, there was one big difference in Zubulake.

These revelations triggered contentious rounds of e-discovery and multiple decisions from Scheindlin, many on the issue of who was going to pay for all this e-discovery.

In the most important of the decisions, Zubulake V, not only did Scheindlin order an adverse inference instruction to the jury—instructing the jury that it may presume the missing evidence was adverse to the case of UBS Warburg—she established the duties of litigators in issuing vis-à-vis legal holds and preserving electronic evidence in discovery.

If the Second Circuit had an interest in reversing Scheindlin in Zubulake, it wouldn’t get the chance. After the jury returned a verdict for Zubulake—finding $29.2 million in damages ($9.1 in compensatory and $20.1 million in punitive damages)—Zubulake and UBS Warburg settled.

However, the Second Circuit would get its chance to reverse Scheindlin in a major e-discovery decision. In Pension Committee of the University of Montreal Pension Plan v. Banc of America Securities, LLC., Judge Scheindlin held that a party’s failure to issue a written legal hold constituted gross negligence per se.

The Second Circuit reversed Scheindlin on this issue in Chin v. Port Authority of New York and New Jersey, with the appellate court holding such analyses should be conducted on a case-by-case basis.

In addition, the December 1, 2015 e-discovery amendments to the U.S. Federal Rules of Civil Procedure—most notably, the amendments to Fed. R. Civ. P. 37(e)—constitute a reversal of Scheindlin’s e-discovery rulings.

Judge Scheindlin and others have argued the revised Rule 37(e) doesn’t do enough to protect the victims of spoliation, noting that—whether a party had an intent to deprive other litigants of evidence—those parties can still be damaged by the spoliator’s destructive conduct.

Although the Second Circuit’s holding in Chin and the promulgation of the 2015 e-discovery amendments to the Federal Rules have scaled back Judge Scheindlin’s holdings on legal holds and spoliation, her impact on the world of e-discovery will continue.

The mere fact that you are reading this post on a legal e-discovery blog with a following of more than 8,000 legal professionals has a lot to do with Shira Scheindlin.

There can be no doubt the 2006 e-discovery amendments to the Federal Rules of Civil Procedure helped build an industry, but the impetus for corporate organizations to get on the e-discovery bandwagon really started years earlier in the Zubulake decisions.

Scheindlin’s law of e-discovery put litigants on notice that they were responsible for preserving, collecting, and producing electronic evidence. Whatever appellate rulings or rules amendments or rule changes happen, this fundamental principal remains the law of the land, and Shira Scheindlin had a lot to do with it.

Judge Scheindlin’s impact has also gone beyond the courtroom through her public speaking and scholarly writing, and her influence will undoubtedly continue in her new role with a New York law firm.

In closing this retrospective on the impact of Shira Scheindlin, we thought it was worth remembering the closing thoughts of the judge in Zubulake V, which can give us a sense of optimism about our profession and our specialty of e-discovery:

This Court, for one, is optimistic that with the guidance now provided it will not be necessary to spend this amount of time again. It is hoped that counsel will heed the guidance provided by these resources and will work to ensure that preservation, production, and spoliation issues are limited, if not eliminated.

In the 12 years since Zubulake V, spoliation hasn’t been eliminated. However, in large part due to Judge Scheindlin’s work, the resources are there. Lawyers and their clients can no longer say they didn’t know any better. Call it the Scheindlin Spoliation Doctrine.