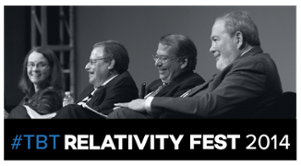 This post originally appeared on the Relativity blog on October 28, 2014—shortly after last year’s Relativity Fest concluded. As we approach this year’s show and another iteration of the highly popular judicial panel, we thought this throwback Thursday would be a great opportunity to revisit the main takeaways from last year’s session. If you’re attending Relativity Fest in a couple of weeks, don’t miss this year’s panel to see what new lessons emerge.

On the first day of the conference, Judges Andrew Peck, Nora Barry Fischer, Xavier Rodriguez, and David Waxse took the stage to share their views on e-discovery in the courtroom. David Horrigan moderated the hour-long discussion.

The panel yielded some interesting agreements and debates. For those of you who missed it, here are four of the top takeaways from the session.

1. When it comes to lawyers and their technical competency, Judge Peck advises you to “Take your geek to court.”

“Even the most experienced lawyers have limits to how much they can know,” said Peck. “The worst thing a lawyer can do is agree to something without knowledge.”

Judge Rodriguez echoed Judge Peck’s sentiment, but added that lawyers should “know enough” to ask the right questions. He brought his point home with a memorable metaphor: “If you’re a lawyer in a malpractice suit, you have to know the right questions to ask, but you’re not expected to know how to perform the surgery.”

2. Cooperation between parties is key—but strategize carefully with your client.

When asked if parties should be forced to cooperate, Judge Waxse boiled it down to one simple point: “To get to the end goal—which is saving time and money—you have to cooperate.” He went on to recommend a best practice for the audience: list all of the issues, and then meet with the other party to determine which of those you actually dispute.

Judge Peck agreed that cooperation is necessary—but took the perspective of the client, who most likely doesn’t see cooperation as a good thing. He suggested two steps for lawyers to take to get their client on board:

1.) Give them the budget with and without cooperation (the latter of which will surely cost more).

2.) Don’t use the word “cooperate.” Instead, say you’re going to “strategically and proactively release information.”

3. Technology-assisted review is definitely gaining popularity, but the court still has questions.

The strongest disagreement among the judges came from a simple question: Will the court mandate predictive coding in the future?

Judge Fischer’s opinion that cost efficiency will always prevail met little opposition. However, whether the courts see technology-assisted review (TAR) as the most cost efficient option is still up for debate.

On one end of the spectrum, Judge Peck confidently called TAR more efficient and less expensive than using keywords or the “eyes on review” method and predicted that, within five years, judges will mandate—or at least strongly recommend—the technology be used on most cases.

Judge Rodriguez disagreed, stating there’s a technical gap that needs to be filled before TAR becomes commonplace. Moreover, he cited the legal system’s slow momentum as a hindrance to any sort of widespread enforcement. “It takes too long for us to do anything to think that predictive coding will actually be required in five years,” he said.

This debate sparked a follow-up question from the audience—should parties disclose if they’re using TAR?

Judges Fischer and Rodriguez took the side that computer-assisted review can be seen as part of your work product, and thus no, you don’t necessarily need to disclose that you plan on using it.

On the flip side, Judges Peck and Waxse agreed it should be disclosed—though perhaps for different reasons. While Judge Peck could not wrap his head around how you could hold a meet and confer without disclosing that you’re using TAR, Judge Waxse stated it plainly—“[The use of predictive coding] should definitely be an area of discussion.”

Halfway through the discussion, Judge Peck took a poll of the audience, asking “How many of you have heard of rule 502(d)?”

Designed to protect against privilege waivers, order 502(d) allows parties to provide the right to claw back material that is accidentally disclosed. Yet, despite its obvious benefits, less than half the crowd raised their hand—a result Judge Peck said he sees far too often.

“It’s your get out of jail free card,” said Peck. “To not get this order is akin to malpractice.”

The Relativity Fest judges panel on e-discovery was one of the largest sessions at the show, and we couldn’t be more thankful to the judges for participating.