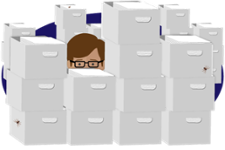 Why Dunder Mifflin Won't Get Sales Leads from the Legal Industry

The underlying comedy of the NBC show The Office is the ticking time bomb of Dunder Mifflin's business—selling paper. While the character Michael Scott claims that “real business is done on paper” the legal space hasn’t always been in on the joke. That’s changing quickly.

At the beginning of November, Harvard Law School announced plans to digitize its collection of U.S. case law, with the goal being to promote accessibility and encourage collaboration. Storing everything in one database eliminates the need for piles and piles of paper. It also makes searching, sending, and sorting through content a heck of a lot easier.

We asked e-discovery experts to recall personal anecdotes about paper-cluttered workspaces, overstuffed bankers boxes, and other paper-related nightmares to highlight some of the reasons why paper was more of a bother than it was worth.

“We had to go to a hot and sweaty records room in the basement to review documents for litigation. The room next to the records room was a smoking room, separated by a partition rather than a real wall. It was 97 degrees, in the middle of August, in the basement, and smoke was billowing over into the document review room. To make the situation worse, our sweaty palms would leave prints on the documents, and the colored ink on some of the paper would smear all over the place. It was horrible.”

“I think folks mostly worry about the hassle of printing paper, or perhaps the struggles that come with lugging or shipping it around. But also consider how difficult it is to find, well, pretty much anything inked onto a dead tree. Back in the day, the bankers boxes would be stacked two or three layers deep and at least eight-feet high. The only thing you had to go on was the control or production number range hastily scribbled onto the side of the box—assuming it wasn’t obstructed by, oh, let’s say, OTHER BOXES.”

“One time, a team of about 60 of us produced more than 6.2 million pieces of paper and manually Bates numbered every single one with an old-fashioned stamp machine. It took a year and a half! If the stamp jammed and you didn’t notice, you’d have the last 400 pages marked with ‘901,’ and you’d have to go back, white out all of them, and re-stamp.”

Emma Kettleton, director of the e-discovery project management and consulting team at Millnet

"I was working at a law firm, and we needed to produce a trial bundle for a large matter. A single version of the bundle was 63 lever arch files; however we needed to produce 11 copies of this for the other side, the various judges, their associates, barristers, and for our own use in the courtroom and back in the office. Physically lining up, checking, boxing, and labeling each of the 693 files around the floors and hallways of the firm was entertaining to say the least. I remember being asked, 'Where is [the senior QC’s] copy of the bundle?' to which I replied, 'It’s lined up down the hallway, past the women’s toilets, between the construction and insolvency teams.'”

"What’s a little carpal tunnel syndrome from repetitive computer clicks when you could be facing deadly brown recluse spiders crawling out of client boxes? That happened at one of our reviews—and that was after a holiday break in law school where we were trapped in an elevator because we loaded too many boxes of evidence into it.”

“Years ago, I did a collection in Europe and somebody said there might be some relevant documents in this warehouse. When we got there, there were shelves and shelves full of boxes as far as the eye could see. We had to use a ladder with wheels to reach the boxes on the highest shelves. Other times, there would be so many boxes in one room you had to set up corridors or mazes to get through all of them. We would use Post-It Notes to code for responsiveness, with purple meaning this and red meaning that. There was a rainbow of colors by the end of the day. If you forgot what the colors meant, then you really had a problem.”

Do you think we’re moving away from the age of paper? A recent survey conducted by Ari Kaplan Advisors found the majority of attorneys predict a completely paperless future for law firms. And based on the feedback from our experts, this prediction seems pretty reasonable.

Had your own traumatic experience with paper? Tell us about it in the comments.

Anja Spruston is a member of the marketing communications team at kCura.

Lawyers and iPads: What Will Law Firms Do Differently in 5 Years Thanks to Going Mobile?