3 Implications of the FRCP Changes to Proportionality 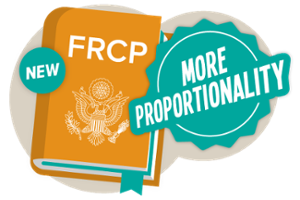 The recent changes to the Federal Rules of Civil Procedure, which went into effect on December 1, 2015, will impact e-discovery best practices for corporate litigants, their outside counsel representatives, and e-discovery service providers alike.

While proportionality has been a factor in determining the breadth of discovery applicable to a specific case, and has been in the Federal Rules since the prior revisions of 2006, its importance is heightened under the newly revised rules.

There are several proportionality factors that the corporate litigant and outside counsel law firms must keep in mind, specifically under the new Fed. R. Civ. P 26 (b)(1), which has been relocated from the former Fed. R. Civ. P 26(b)(2)(C)(iii):

Though the revisions have only recently gone into effect, there are three key implications e-discovery practitioners should be aware of today.

With the increased focus on proportionality under the new rules, determining which party will shoulder the burden of proof on the elements needed to obtain sanctions for discovery violations will likely be a topic of frequent discussion in coming months. Under the former Federal Rules of Civil Procedure, judges had greater discretion to impose sanctions—remedial and/or punitive in nature—based on the discovery violation and the conduct of the parties. Parties could be subject to the most severe available sanctions, without a need to address the issue, regardless of whether the party’s improper actions were intentional.

The process discussed in the revised Fed. R. Civ. P Rule 37 for imposition of sanctions will focus on the intent of the discovery abuse, and sanctions for actions that are unintentional are limited in scope. Sanctions for unintentional discovery violations will be remedial in nature, and will try to identify reasonable means to facilitate the requested discovery rather than punishing the offending party.

Those sanctions will be limited to: preventing a party from offering certain evidence; or permitting evidence of lost ESI with an explanation to the jury; and other possible jury instructions that will help assist in evaluating the impact of the lost ESI.

Requiring proof of intentional abuse will create an extra burden for the party that is seeking the most severe types of sanctions, which are outlined in revised Fed. R. Civ. P. 37(e)(2), such as an adverse inference instruction to the jury or terminating sanctions (default judgement or dismissal of a case).

Moreover, the new rules make it clear that the common law duty to preserve evidence only exists when litigation is reasonably anticipated. In addition, the standard for the duty to preserve is not “perfection” but is based on “reasonableness.” Factors considered in determining if reasonable steps were taken to preserve ESI include the sophistication level of the litigant, the resources available to the party, and the proportionality of the effort required to preserve the potential evidence.

2. Attorney Obligations Are Continuing to Expand

With the revisions, the Federal Rules make it clear that attorneys need to be versed in technology to fulfill their ethical duties of professional competence. Additionally, as judges become increasingly technologically savvy and begin to rely on the use of special masters when disputes arise regarding specific technological issues, counsel are going to be held to higher standards of competence in the use of technology.

For example, during the meet and confer phase of litigation, attorneys will need to have specific information regarding the volume and composition of potentially relevant ESI that will be involved in the litigation. Making broad-based assertions about projected costs and burdens will not be helpful under the new rules without specifics to give support to the attorney’s declarations.

3. Technology and Process Are Vital

When choosing e-discovery technologies and planning a workflow process, there are various issues that both in-house counsel and outside counsel must consider.

If using technology-assisted review (TAR), for example, attorneys now more than ever must understand recall and precision rates (measures of completeness and exactness) and what level of these rates is sufficient. Perfection is not the standard when it comes to production obligations, but what is an acceptable standard to achieve when using TAR?

The level of transparency when using TAR is another area attorneys should consider. For example:

The impact of the newly revised Federal Rules of Civil Procedure will likely take some time to be become clear as the courts provide new case precedent that will help clarify the concept of proportionality. One thing that does appear certain is that the use of technology will continue to be a vital component of fulfilling legal discovery obligations.

Additionally, although the new rules will likely lead to enhanced cooperation between opposing law firms, there are still many areas of potential dispute that require further clarification. “Cost-shifting” arguments can be expected to increase, and disputes regarding the accessibility of data may rise. When proportionality factors are raised to the court, certain discovery requests might be deemed appropriate but will require some discussion of the expected costs involved to the producing party.

Joe Bartolo is a former litigator in New York State, with more than 10 years of experience working for e-discovery providers. Joe is a VP in the Metro New York Chapter of ACEDS and the co-chair of their Educational Committee. He is a former working group leader in the EDRM and has instructed continuing legal education courses about e-discovery throughout the United States. Joe received a Juris Doctorate Degree from Rutgers School of Law – Newark in 1992, and a Bachelor of Arts Degree in Political Science from New York University in 1989.

e-Discovery and the Magna Carta: More In Common Than You'd Think