A Clear View or a Short Distance? AI and the Legal Industry 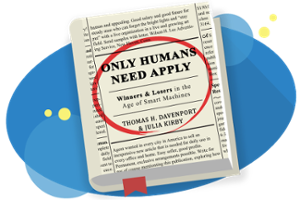 If you're like me, work from futurists like Richard Susskind fills you with a curious mixture of excitement and anxiety. The excitement comes from the advances in artificial intelligence (AI) that are playing out in the legal world where analytics (including technology-assisted review) have quickly taken center stage. Conversely, it’s impossible not to see these advancements as an encroachment on the everyday work that the e-discovery community has been doing over the last decade, on the way toward building an $11 billion industry.

Headlines like “How Soon Will You Lose Your Job To An AI Robot?” only make matters worse by constantly pitting man against machine in a Terminator-esque zero-sum game.

Fortunately, beyond the hype and hyperbole, some are seeking to find the common ground in this so-called “war.”

In a recent book entitled Only Humans Need Apply: Winners and Losers in the Age of Smart Machines, authors Thomas H. Davenport and Julia Kirby capture many of these common fears by noting that “machines are becoming so capable that, today, it is hard to see the higher cognitive ground that many people could move to.”

This concern is precisely the source of the anxiety many seem to feel. Savvy knowledge workers everywhere are becoming increasingly aware of the role that artificial intelligence may play in their world. In fact, the legal technology landscape turns out to be a front-and-center “Exhibit A” for this type of encroachment.

In Only Humans Need Apply, Davenport and Kirby spend time focusing on electronic discovery and go on to say:

The bane of a lawyer's existence, for example, is “discovery”—the tedious process of sifting through documents and deposition transcripts in search of nuggets pertaining to a lawsuit. When “e-discovery” and “predictive coding” arrived on the scene, allowing much of this text review to be automated, few shouted their objections.

Only Humans Need Apply does a good job of laying out the core premise that intelligent technologies will be taking over more and more of the decision-making territory once occupied by humans. However, the authors discuss this in a much more positive way that lays out scenarios where we (carbon-based life forms) can continue to be productive as this next revolution occurs.

One of my favorite lines of the book is “never mistake a clear view for short distance.” In other words, even as we stare this inevitable sea change in the face, it still may take a good while to transpire. This is particularly apropos in the legal community which, as we know, is not often a first mover, compared to other industries. And yet, even if radical changes are a ways off, the authors believe that significant change will “fill our windshields within a decade.”

The book’s main goal is to help chart the way forward for readers so they can understand what humans can, in fact, do better than machines, and expose some nuances behind the AI movement. In particular, the authors discuss that in reality you may be racing against other humans: “those humans who get smarter and smarter are relatively likely to grab one of the diminished number of jobs left.”

The balance of the book is dedicated to the notion that winning in the age of smart machines will take many forms, because it will involve working with intelligent systems in many configurations. The key isn’t competition but instead “augmentation,” in which “humans and computers combine their strengths to achieve more favorable outcomes than either could alone.”

Expanding on the “augmentation” message, the authors chart out five distinct ways to succeed:

The “stepping in” section is particularly relevant, as the authors highlight e-discovery guru Ralph Losey as a prototypical example of someone who has a “passion for change—keeping up with it, creating it, adapting to it, and helping others adapt to it.” People like Ralph are singled out since they “know how to set up, get running, and maintain these new machines” and as such will be in “huge demand.”

While there isn’t a single way forward articulated in Only Humans Need Apply, the framework is both positive and concrete. There will undoubtedly be challenges and, as the authors note: “work in the age of smart machines means constant change and adaptation.”

While this won’t be easy, it does chart a constructive path forward that fortunately doesn’t pit man against machine.

3 Legal Tech Takeaways from Richard Susskind's 'Future of the Professions'

Making a Case for Machine Learning to Legal Departments