A New e-Discovery Era of Cooperation and Technology-assisted Review? 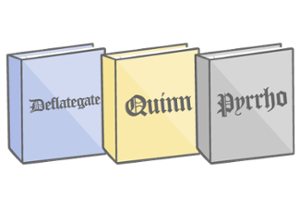 Having litigants and their lawyers cooperate in e-discovery has been a goal of many judges for years—even before cooperation became a big issue leading up to the 2015 e-discovery amendments to the Federal Rules of Civil Procedure (FRCP).

Likewise, court decisions have opened the door for the use of technology-assisted review (TAR) and other forms of advanced analytics in e-discovery.

But are we anywhere close to an e-discovery era of increased cooperation and widespread TAR?

If case law and polling data from our webinar Mid-Year Briefing: 2016 Data Discovery Case Law gives us any indication, we may be closer than you think.

During the webinar, we discussed some of the noteworthy data discovery cases during the first half of 2016 with US Magistrate Judge Nora Barry Fischer (W.D. Pa.).

Not surprisingly, the impact of the FRCP amendments was a major topic, as was the use of TAR, highlighted by the UK joining the US and Ireland in approving the use of TAR in February’s Pyrrho Investments Ltd. v. MWB Property Ltd., 2016 EWHC 256 (Ch).

One of the biggest FRCP questions for litigants during the first half of 2016 was whether the newly amended rules applied to cases commenced before the December 1, 2015 effective date.

Although more courts in 2016 have applied the new rules, to give practitioners some insight into how their cases might be handled, we asked Judge Fisher to give her perspective on 2016 cases applying the new rules:

As well as cases applying the old rules:

Legaltech News covered the webinar and reported on our discussion with Judge Fischer. Here, we’d like to do a deeper dive into what the audience may be able to tell us about data discovery trends in 2016. 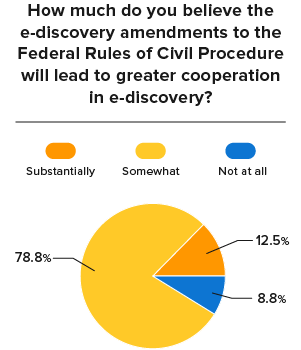 In addition to discussing the cases with Judge Fischer, we polled the audience members on their views on issues related to the cases.

The respondents came from a broad cross-section of organizations, including law firms, corporate legal departments, government agencies, and some e-discovery service providers. They also came from organizations of different sizes.

Despite the work of the Sedona Conference and the 2015 amendments to Rules 1 and 26, some legal observers have been skeptical about the possibility of increased cooperation in e-discovery.

The Age of TAR 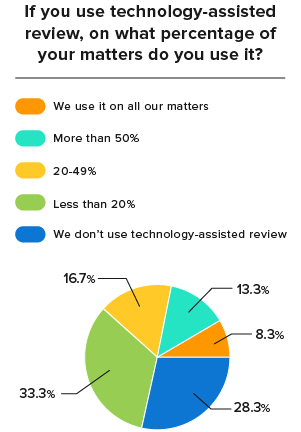 In what may have been the biggest surprise in the polling, over 70 percent of the audience reported using technology-assisted review. Not only that, 8.3 percent of respondents said they used TAR on all their matters.

Another TAR polling question focused on how the audience used technology-assisted review. As expected, the largest group of those who used TAR, 40.9 percent, used it for its traditional purpose in e-discovery: litigation document review.

However, 25 percent of respondents not only used it for document review, but for early case assessment and information governance.

As we discussed with Judge Fischer, the adversarial nature of the US system of litigation presents built-in challenges for those seeking cooperation in e-discovery. Litigators are trained to fight for their clients.

However, our polling data indicate legal teams may be seeing the 2015 Federal Rules amendments as an opportunity to chart a new course in American litigation. The message that e-discovery with cooperation costs clients substantially less than e-discovery without cooperation may be hitting home—adversarial system or not.

We also think the cooperation polling data may be linked to the TAR data. The use of TAR in litigation requires a certain amount of cooperation. In technology-assisted review cases such as Pyrrho, cooperation among the parties was an important factor in achieving court approval.

The 71.7 percent of respondents using technology-assisted review is one of the highest percentages of TAR usage we’ve seen, and it indicates TAR has gone mainstream.

Our review of case law in the first half of 2016 gives another indication that TAR is becoming part of everyday life in e-discovery.

Whether its Ghorbanian illustrating TAR becoming part of local rules or Martinelli putting TAR into protocols for electronically stored information, these cases indicate the days of TAR as a seldom-used novelty are over—especially if over 70 percent of legal teams are using it.

Despite all the previous signs to the contrary, our mid-year case law review and the associated polling data indicate we may actually be entering a new era of cooperation and technology-assisted review.