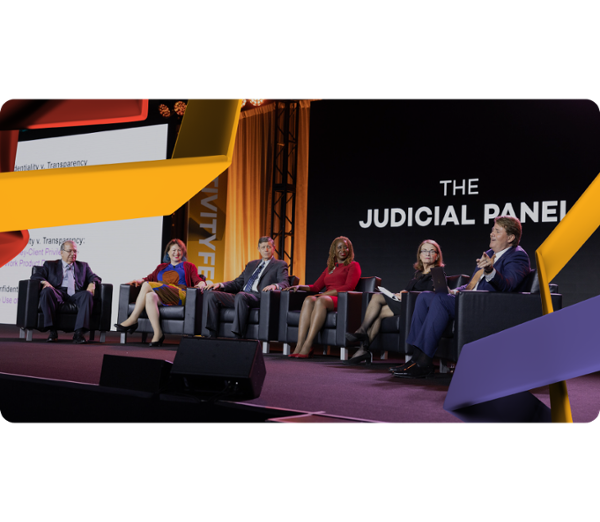 Repeat attendees often enjoy talking about their favorite Relativity Fest traditions. We bring back a few fan-favorite staples every year—with a refreshed twist—because you love them, and so do we.

One such tradition is our annual Judicial Panel, featuring many esteemed jurists sharing a spirited discussion moderated by Relativity Discovery Counsel and Legal Education Director David Horrigan. The panel shares perspectives from behind the bench on topical issues. What results is a more informed legal tech community—and a more personable look at some of the brightest, most tech-aware jurists from courts in the United States and United Kingdom.

Our ninth annual Judicial Panel at Relativity Fest 2022—back in Chicago for the first time in three years!—featured some familiar faces:

This year’s panel zoomed in on a particular challenge of legal practice: the need to balance confidentiality and transparency in the justice system. Read on for some key takeaways.

Visit the Relativity Fest event platform to view the recording of our ninth annual Judicial Panel (it’s available until December 16, 2022, and you can still register to gain access if you haven’t already).

David opened the discussion with a heavy hitter that’s been top of mind for many American legal professionals this year: the leak of the draft Supreme Court of the United States opinion in Dobbs v. Jackson Women’s Health Organization. Naturally, everyone shared in the same burning question: who leaked it?

“We don’t know who did it,” acknowledged Judge Rodriguez. “When the leaked draft came out, the chief justice announced an investigation would be done. Implicit in that was that we all expected results—but they’re not saying anything. Transparency is not always a trait valued in the national judiciary, even among lower judges in the system.”

The panel agreed that confidentiality is key to the effective functioning of our judicial branch in the United States, and elements of that echo throughout lower courts as well. Still, it’s difficult to remain in the dark on how this sort of thing could happen.

“Perhaps they do know the answer but think we can’t handle the truth,” Master McCloud added. She also emphasized the real impact this has had on people within the courts, and the true scale of its potential impact: “I feel sorry for the law clerks because people point fingers at them, but in truth, we don’t know. It could even be a foreign power, which is why these things have national implications.”

All the judges shared a sentiment that this kind of breach of trust would have a devastating impact on someone’s career—and on the working relationships behind the scenes in their courtrooms.

As Judge Matthewman said, “Chambers is like a small family; this kind of thing is like an attack on the court or a judge. I would find it a really terrible personal affront. It’s just so wrong.”

He shared that respecting, on principle, that “what happens in chambers, stays in chambers” is critical to ensuring thoughtful input and thorough consideration go into decisions and opinions before they’re finalized and made public in each case.

Judge Fischer agreed, noting that judges in her court “feel a direct bond with our clerks, like a family within chambers, and we’d all be affronted and angry and also be in a position where we felt there was a breach of trust” should a leak of this nature occur. And this isn’t an unspoken rule. She continued: “At the outset, our clerks are told that everything we do in chambers Is confidential until it’s public and everyone has the right to know. That message is loud and clear, emphasized repeatedly.”

Technology and Visibility into Court Proceedings

Moving on to a less emotional issue of transparency, David asked the judges to provide their input on the ongoing debate of whether cameras should be allowed in courtrooms.

On the one hand, he quoted former Chief Justice of the Supreme Court Warren Burger: “People in an open society do not demand infallibility from their institutions, but it is difficult for them to accept what they are prohibited from observing.”

Surely allowing for remote viewing of court proceedings could be in service of allowing the public to observe the goings on of the justice system?

On the other hand, integrating technology into legal proceedings can lead to a certain type of … distraction.

Interestingly, most of our panelists shared the opinion that the benefits of this sort of public view into the courtroom generally outweigh the pitfalls.

“I would love to see cameras in all courts; they’re public courts and anyone can come at any time, so why not?” Master McCloud said.

“Unfortunately, New York does not permit audio/visual coverage of trial proceedings—and let me just say, what I’m about to say is not representative of the court system, but my personal opinion,” Justice Kennedy added. “But I believe in having cameras in the courtroom. I believe modernized courts enhance the public’s understanding of the judiciary. We knows civics is not taught in many schools, and I believe some of the—can I just say ‘craziness’—that’s going on lately is because people really do not understand the role of the judiciary.”

Judge Rodriguez offered some temperance to the discussion: “I think David keeps inviting me back because I’m the contrarian. But I think it’s complicated. I have concerns for jury selection; would you show up to selection to be asked a whole bunch of questions with cameras trained on you?” he posited.

“And witnesses—it might be a reflection of some of our case types, but down on the border I have a lot of serious drug cases involving cartels, and witnesses would be hesitant to testify knowing cameras would be on them,” he continued. “It’s an open court, yes, but that requires someone to travel to the courthouse and be recognized in the courthouse, which serves as a dissuading factor [for bad actors to attend]. I see value in some cases, and pause for concerns in others.”

David mentioned another remote proceeding that made headlines, in which a deponent on the video conference was cooking pasta, drinking an adult beverage, and generally being inappropriate. Though David acknowledged it’s “difficult to imagine that lawyers would act this way in court proceedings,” these things do happen—and Judge Matthewman happened to have been involved in that particular case.

“I won’t get much into the woods of the case, other than to say that I did impose sanctions,” he shared to an applauding audience. But, despite occasional poor judgment calls like that deponent’s, “I personally think [the use of cameras during proceedings] would be a good thing in federal court, because when I think of all my colleagues, they all really do a good job.

“They’re fair, meticulous, honest, and in the courtroom, almost everyone has a great judicial demeanor,” he continued. “I think if cameras were in the courtroom it would help the public understand that how we arrive at our decisions is a fair and just system.”

Proper and Improper Use of Protective Orders

Often, balancing the need for public transparency and appropriate confidentiality for litigants is a matter of proportionality—a familiar concept for e-discovery practitioners. While protective orders, used to seal information from public court records, seek to help strike this balance, they, too, can be abused.

“When used appropriately, protective orders make the process work,” Judge Matthewman said. “Personal information that shouldn’t be disclosed, shouldn’t be disclosed—that’s a good reason for a protective order. But I see lawyers wanting to seal everything out of public view, and I think that’s wrong. Using it too broadly is incorrect. The public has a right to see what’s going on in the courts.”

The process for sealing is, of course, built to prevent abuse. As Justice Kennedy noted, “Parties cannot just agree to seal; they need to show good cause. When a judge does issue an order sealing court records, it has to be written and the judge has to specify the grounds with respect to what constitutes good cause in that particular case.”

In what became a common refrain for the panel, she concluded: “Transparency is key.”

Still, Judge Rodriguez cautioned the audience to tread carefully on this issue.

“My fear for this topic is that so many civil cases have opted out of the judicial system and gone to arbitration. [Confidentiality] has been a big driver; litigants do not want their documents and information disclosed in a public forum,” he noted. “We have to find some way to reach a moderate ground, because if the entire docket could no longer be sealed, we’d lose whatever’s left of the civil justice system and not have open courts at all anymore.”

In their closing thoughts for the session, all of the judges echoed the necessity of prudence and collaboration in striking just the right balance between transparency and confidentiality.

Adding to Judge Rodriguez’s comments on the value of keeping cases in the court system, Master McCloud said: “If parties rely on private settlement, you never learn what’s going on or how to evolve the law. The key is proportionality; ultimately, the rights of third parties and the press win.”

“Transparency has to prevail to the extent that it can without harming rights,” Judge Matthewman agreed.

Offering some practical advice to her colleagues, Judge Fischer suggested “One thing we judges can do when we sit down and first see a case in trial court is, at a case management conference, to talk about some of these issues and get some agreement to reduce the number of motions for sealings and the like.”

Looking back at the issue of transparency via technology, Justice Kennedy also encouraged prudence.

“When we think about the virtual trials and conferences, certainly courts have been more productive and more creative; however, greater use of technology brings risks,” she cautioned. “We have to know how to use it so we don’t have any other cat situations.”

And finally, reflecting on the esteem of this year’s panel: “If only all our colleagues were as thoughtful as the judges here,” Judge Rodriguez mused.

The Best of Relativity Fest 2022: Our Favorite Commentary