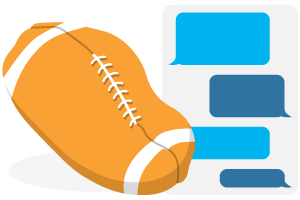 In a popular post from about a year ago, we talked about “Discovering Deflategate: What Tom Brady, Gisele Bundchen, and the NFL can Teach Us about e-Discovery.”

Well, Deflategate is the gift that keeps on giving because this week the U.S. Court of Appeals issued its decision in the Deflategate appeal.

If National Football League (NFL) Commissioner Roger Goodell is the most despised man in Boston since Benedict Arnold, the U.S. Court of Appeals has now taken on the role of George III of England.

Here at The Relativity Blog, we’re not shy about pointing out when we think the Second Circuit gets it wrong in its analysis of e-discovery law, such as its conclusion last year that if a machine can do it, it can’t be the practice of law.

In its analysis of Deflategate, we think the Second Circuit, once again, threw an incomplete pass in its conclusions on e-discovery law.

In fairness, we should note a few things. First, although the author of this post is a licensed attorney specializing in discovery law, he’s also a fan of the New England Patriots. Next, Second Circuit Chief Judge Robert Katzmann dissented, so he’s off the hook.

Finally, as we ourselves have noted, courts have discretion on choosing the new or old Federal Rules of Civil Procedure when it comes to cases—such as Deflategate—that were in progress when the amendments went into effect on Dec. 1, 2015.

However, Judge Bennington Parker, the author of the Second Circuit’s Deflategate opinion, and Judge Denny Chin, who signed on to it, misstate the law of e-discovery.

In criticizing Tom Brady’s destruction of his mobile phone, the majority cites a case, Residential Funding Corp. v. DeGeorge Fin. Corp., 306 F.3d 99 (2d. Cir. 2002); but the court didn’t mention that the decision had been repudiated specifically in the recent amendments to the Federal Rules of Civil Procedure.

In its Deflategate opinion, the majority makes the following assertion regarding Tom Brady’s destruction of his mobile phone, citing Residential Funding for legal support:

It is well established that the law permits a trier of fact to infer that a party who deliberately destroys relevant evidence the party had an obligation to produce did so in order to conceal damaging information from the adjudicator.

Actually, it’s not so well established when it comes to electronic evidence. Legal experts have been debating this issue for years.

Furthermore, Judge Parker’s opinion insinuates that this point is so well-settled, counsel for Brady and the players association should have known it:

These principles are sufficiently settled that there is no need for any specific mention of them in a collective agreement, and we are confident that their application came as no surprise to Brady or the Association.

We are less confident Brady’s learned counsel from Winston & Strawn and Gibson, Dunn & Crutcher weren’t surprised at the Second Circuit’s analysis because Brady’s legal team may have read the recent amendments to the Federal Rules of Civil Procedure.

Specifically, although the Second Circuit feels free to follow Residential Funding on the issue of e-discovery spoliation, Brady and the association may have read the Committee Notes on Fed. R. Civ. P. 37(e)(2), where the Committee wrote:

This subdivision authorizes courts to use specified and very severe measures to address or deter failures to preserve electronically stored information, but only on finding that the party that lost the information acted with the intent to deprive another party of the information’s use in the litigation. It is designed to provide a uniform standard in federal court for use of these serious measures when addressing failure to preserve electronically stored information. It rejects cases such as Residential Funding Corp. v. DeGeorge Financial Corp., 306 F.3d 99 (2d Cir. 2002), that authorize the giving of adverse-inference instructions on a finding of negligence or gross negligence.

The Committee could not have been clearer, putting the Second Circuit’s analysis on shaky legal footing.

In addition to citing the repudiated case, the majority misstates the law. Under the new rule, mere deliberate destruction of the responsive data doesn’t warrant an adverse inference instruction. There must be an intent to deprive the other party of the evidence.

Now, a reasonable trier of fact could find that Brady did, in fact, destroy the phone with the intent to deprive the NFL of the evidence. However, the majority doesn’t perform that analysis. It states simply that mere deliberate destruction gets an adverse inference instruction—without ever mentioning the required intent.

Do the Federal Rules Apply?

Now, we could give the Second Circuit the benefit of the doubt. The court could argue the amendments are irrelevant because the underlying arbitration matter was not a federal civil action subject to the Federal Rules of Civil Procedure.

In addition, the court could argue it chose to cite the black letter e-discovery law prior to the Dec. 1, 2015, amendments for a case in progress before the effective date.

Yet, we’re not sure even the old rules get the Second Circuit off the hook.

Absent exceptional circumstances, a court may not impose sanctions under these rules on a party for failing to provide electronically stored information lost as a result of the routine, good faith operation of an electronic information system.

Brady claimed it was his routine, good faith procedure to destroy old phones when he got new ones. Many information governance lawyers tell clients to do the same thing to their old office photocopiers with memory capability.

However, although a fact-finder is free to find Brady’s claim hogwash, a court serving as both legal jurist and trier of fact must do some analysis. The Second Circuit is not correct when it says it’s well-settled law that an adverse inference instruction is the sanction for the deliberate destruction of electronic evidence.

The Second Circuit’s Deflategate decision was based on Goodell’s authority under the NFL’s collective agreement with the players. However, the Second Circuit wandered into e-discovery law and got it wrong.

The case matters because e-discovery practitioners need to know that even many well-respected appellate court judges are not e-discovery experts. Their clients know even less about it. The appellate jurists may have been wrong on the law, but if Brady hadn’t destroyed evidence in the first place, he probably would not have angered Goodell, and the litigation may have been avoided.

Bennington Parker and Denny Chin are among the nation’s most outstanding jurists. They reached the federal appellate bench because they are legal experts. They just had a bad day at the office on this one and fumbled the ball on e-discovery law.

6 RelativityOne Updates That Will Make You Faster and More Productive