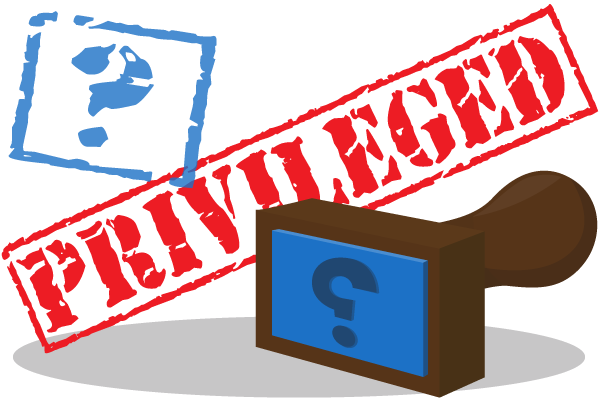 Editor's Note: Originally published in late 2016, this post provides insightful advice on how to ensure your in-house attorney-client privilege is protected during the normal course of business. Give it a read to ensure you're setting your legal team up for success in this critical component of e-discovery.

When properly applied and handled, attorney-client privilege protects certain communications from becoming discoverable in litigation by opposing or investigating parties. The underlying goal is to ensure lawyers can provide legal advice to their clients and that clients can be secure in the confidentiality of those communications.

If privilege does not apply to a given communication, or if the privilege applied but is then lost or waived, the communication may need to be disclosed during e-discovery and may even become public. So what does in-house privilege look like, and what can you do to protect it? The answer will vary between states and countries, but here’s a high-level look at where to start.

Who is the Attorney?

The privilege applies to communications with any licensed lawyer who has a legal title, is part of the company’s legal department, and has been hired to work as a lawyer.

In some companies, former lawyers may be serving in different capacities. For example, at kCura, we have current and former attorneys on our sales and customer support teams. However, because these individuals aren’t hired to act in a legal capacity, the attorney-client privilege does not generally apply to their communications—even if they maintain law licenses and provide legal views on an issue.

On the other hand, disclosure of privileged communications to counsel’s representatives who are not attorneys—such as paralegals and administrative assistants—does not impair the privilege. This is true provided the representative is involved in the specific legal matter to which the communication relates.

Who is the Client?

A company operates through officers, directors, shareholders, and employees. Not all of these people can be considered the client for purposes of attorney-client privilege. Courts in various jurisdictions have developed their own tests for determining when privilege applies.

The United States federal courts and most US state courts apply a 1981 US Supreme Court ruling known as the Upjohn Test, which extends the privilege to attorney-client communications concerning matters within the scope of the duties of the particular person. If the privileged communication is made by, or distributed to, a person whose job duties are not relevant to the legal issues, the privilege may have been waived. For example, a business person seeking legal guidance on the interpretation or enforceability of a proposed contract could take advantage of privilege. But communications between counsel and that same business person concerning the company’s strategy on a patent troll claim, or concerning an HR legal claim made by another person in another department, may not be covered by privilege if those claims have no relevance to that business person’s role (think “gossip”).

A few states, including Illinois, still apply an older, stricter Control Group Test. This test applies privilege only to persons in positions to control, or take a substantial part in, the making of the company decision for which the legal advice is necessary. This group tends to be strictly limited, including only top management, or corporate employees who advise top management or are necessary for the transmission of information. If the privileged communication is made by, or distributed to, anyone outside the control group, the privilege may have been waived.

One point is clear: any person who works for an unrelated company is not the client, and disclosures to any such person would cause the privilege to be lost. That means the communication would then need to be disclosed in litigation because the privilege would have been waived.

Communication for Purpose of Obtaining or Providing Legal Advice

Broadly speaking, attorney-client privilege protects attorney-client communications which are made for the purpose of obtaining and providing legal advice. But in-house counsel serve as an integral part of the company and frequently act in “dual purpose” capacities—providing a mix of legal and business advice in response to mixed purpose questions. So how do the rules of privilege account for that hybrid expertise?

US court decisions on in-house attorney-client privilege vary between federal and state courts, and between different state courts, and each decision tends to be rather fact-specific. In some jurisdictions, courts hold that the privilege still applies if there is a blend of legal and business purposes, so long as legal advice is the “primary purpose.” In 2013, for example, the New Mexico Court of Appeals said that where the primary purpose is unclear, the court should find against the existence of privilege. However, in 2014, the DC Circuit Court stated that the true test is whether obtaining or providing legal advice was “one of the significant purposes” of the communication.

As an example of how these concepts could apply, a sales leader might send his general counsel an email with proposed terms for agreements that would allocate exclusive market territories between competing distributors. The email might ask whether there are any antitrust legal issues, and if so, whether the GC has ideas for addressing those issues through alternative ways for structuring the deals or by modifying the business terms. The sales leader might also tap into the GC’s broader in-house background experience by requesting non-legal input about how other companies have dealt with these issues.

In that example, the sales leader’s email should be protected by the DC Circuit’s “one of the significant purposes” legal advice test. However, it could be a closer call under the “primary purpose” legal advice test, depending on the wording. At the same time, the same email seems unlikely to obtain privileged status in any jurisdictions that do not allow a mixed primary legal and secondary business purpose for a privileged communication. A similar analysis may apply to the GC’s response, though an oral discussion is the more likely next step in this example.

Certain communications fall short of all privilege legal purpose tests. Merely copying counsel on a communication to other business personnel does not create attorney-client privilege. Similarly, inviting counsel to a broader meeting to keep counsel generally informed does not protect the discussions. Moreover, using the privilege label too often in these types of situations can create a sense that the privilege is being applied too loosely. That could undermine efforts to apply the privilege to more appropriate attorney-client communications—and that could mean putting your e-discovery protocols at risk.

It’s clear that no small number of issues play into properly applying the attorney-client privilege and in protecting the privilege against waiver based on improper disclosure.

Luckily, there are some practical ways to navigate the privilege minefield by reinforcing the following:

Counsel should avoid including business and legal advice in the same communication where possible, or separate the advice into sections. Additionally, counsel with dual titles (e.g., general counsel, vice president, and secretary) should consider using only their legal title when signing off on legal advice.

These practices will not guarantee a positive privilege status, but they can strengthen an argument in favor of privilege. However, be sure not to overuse them and run the risk of a court finding that the privilege has been spread so thin it is redundant.

As a special note, keep in mind that most European Union countries don’t recognize in-house attorney-client privilege at all based on a perceived lack of independence. US in-house counsel may prefer to get outside counsel involved in communications respecting sensitive European issues.

Similarly, even in the US, your in-house counsel may favor involving outside counsel for certain matters where privilege protection is critical.

Our final note is just this: if you are lucky enough to work for a company that believes in the virtues of honesty, accountability, fair dealing, and lawful conduct, you may have less need to worry about protecting risky email content with attorney-client privilege—and less need to worry about what to do when an email that could have been privileged information winds up being discoverable.

Finding Value in e-Discovery: Insights from a Corporate Lawyer

How to Kick Privileged Information Out of Your Production Set