Impressing the Judge: Lessons from the 2016 Relativity Fest Judicial Panel 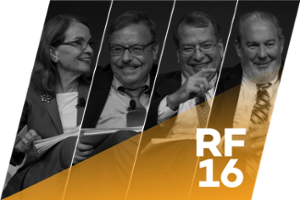 The annual judicial panel has become a Relativity Fest tradition, with four impressive federal judges delivering powerful insight and advice for three years in a row.

This year’s panel was no exception. And though the judges each brought a unique perspective to the table, we noticed a handful of common themes around what they do and don’t want from counsel.

So if you’re looking to woo your way into a judge’s good graces, you may want to keep these five lessons in mind.

Lesson #1: Don’t Expect Them to Tell You What to Do

Overall, the panelists seemed to agree that last year’s changes to the Federal Rules of Civil Procedure swept in a notion that judges can and should play a more active role in e-discovery—to an extent. Judge Andrew Peck made a clear distinction that a more active role “is different than dictating what the parties should do.”

Peck went on to share that, when facing a disagreement in his courtroom, he simply defers to the Sedona Principles—particularly Principle 6, “which states that the responding party is in the best position to decide what method it should use to produce documents being requested by the other side.” He cited the Hyles case, a time where he maybe didn’t quite live up to his reputation as “Grand Poobah” (moderator David Horrigan’s words, not Judge Peck’s) of technology-assisted review.

“Perhaps [Hyles], knowing my approval level for TAR, thought they had a no-brainer situation, and were surprised when I said no [to mandating TAR]. I do think TAR is better, […] but when the city had adequate reasons for not wanting to use it, I resolved it by going to Sedona Principle 6.”

While the judges won’t completely dictate what you should do, they do want counsel to put one pesky habit to rest: the “drive by” Rule 16 conference, where the pre-trial meeting between the parties and court is done more or less via email, rather than as a true discussion.

“We as judges know so little about your case,” said Judge Xavier Rodriguez. “At the Rule 16 we generally have the complaint before us, we have the answer, and maybe there’s been some motion to dismiss—that’s all we have.”

Judge Nora Barry Fischer shared a similar sentiment: “Some cases come to the court with a long history and with each side knowing quite a bit about it—but they may not have spent a lot of time educating the judge and his or her clerks.”

So what does this mean for counsel? The judges want you to come to the conference prepared to discuss some basic questions about the case and your discovery process. It could be your opportunity to resolve discovery disputes before they happen.

Judges Fischer and Rodriguez threw out some questions you should be prepared to answer:

And, at the very least, you need to focus on what’s actually in dispute—something Judge David Waxse says gets overlooked far too often.

“One of the first things I do when conferring with counsel is find out whether they have analyzed the disputed factual issues of the case,” he said. “It’s amazing how I’ll get presented with a discovery dispute, and I’ll ask them, ‘How does the discovery relate to a disputed fact of the case?’ and I’ll get answers like, ‘It’s an employment case, we always do this.’ Well, you don’t have to do it if there isn’t a dispute about those facts.”

One trend the judges are routinely seeing—and encouraging—is the use of status conferences, especially in more complicated cases. According to Judge Fischer, these conferences can ensure a case doesn’t get stuck in the mud because of discovery. It’s a handy tool that counsel should consider adding to the scheduling order—even if you’re not sure you’ll need it.

“If [you] have nothing to discuss, just email the clerk [to cancel],” Judge Fischer suggested. “That seems to work, particularly in bigger liability cases and some of the more paper-intensive cases we have.”

If you’re in Judge Peck’s court, you might also expect that these status conferences will be … let’s call it motivational.

“If the case is a real problem child, [the conference] might be every Friday,” he said. “Sometimes I’ll say 'let’s do it every Friday at 4:00 p.m.' to incentivize them to solve problems on their own before the conference.”

Proportionality has been a hot topic over the past year, with the 2015 rule changes introducing a proportional provision to Rule 26(b)(1), as well as a six-pronged test for proportionality.

However, as Judge Waxse reminded the crowd, the six-pronged test is not new—it’s “simply moving the language” to be more visible and apparent in the rules. Still, the judges have seen an impact.

“There have been more decisions [this year] dealing with the proportionality concepts than there had been in the past 20 years, when those six factors were buried deeper in the rules,” said Peck. “That is proof you can teach judges as well as lawyers to read if you make it simple.”

When it comes to keeping things proportional, Judge Peck came through with two simple tips:

Judge Peck wrapped up his thoughts on proportionality with a reminder about the last factor in the six-pronged test: whether the burden or expense of the proposed discovery outweighs its likely benefit.

Lesson #5: Being Sneaky Won’t Get You Anywhere

When it comes to sanctions, Judge Waxse delivered perhaps our favorite advice of the session: if you do something wrong, own it.

“People are scared to death of getting sanctioned. If you look at the big sanction cases, they have two elements: first, you screw up; and second, you try to cover it up,” said Judge Waxse. “My suggestion is first, try to do it right. If you don’t do it right, don’t cover it up.”

Solid advice for both inside and outside the courtroom.