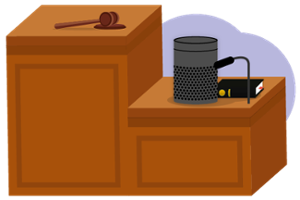 When James Bates, Owen McDonald, and Victor Collins began an evening of football, drinking, and hot tubbing on November 21, 2015, they probably had no idea they were on the verge of making new law in the expanding specialty of data discovery.

However, by the following morning, Collins was dead and Bates was in the crosshairs of a police investigation. The Bates home being somewhat typical in the era of the Internet of Things, it included a device known as an electronic home assistant. Thus, a fundamental legal question soon arose: is it lawful for police to seize and examine data from an Amazon Echo?

Jiu Jitsu in the Jacuzzi?

After the evening of football and adult beverages on the high seas, McDonald went home, and Bates said he went to bed, only to awake in the morning to find Collins floating face-down in the hot tub.

However, as Bates explained the situation to police, certain things didn’t add up. As our friends from Texas might say, “That dog don’t hunt.”

First, the water in the hot tub had a reddish tint, which was not surprising, given that Collins's body had blood emanating from the nose and mouth, a cut on the eyelid, swollen and bruised lips, and a black eye.

Things didn’t get any better for Bates as police examined the remainder of the scene, where they found blood splattered on the hot tub cover, Collins’ broken eyeglasses, a broken Skyy vodka bottle, and indications that the area around the hot tub had been rinsed with water.

As part of their investigation, police sought data from Bates’ Amazon Echo. However, Bates’ counsel, Kimberly Weber, argued the search was improper because Bates had a reasonable expectation of privacy in data collected by his Echo.

As Ballard Spahr LLP Partner Ed McAndrew has said at Relativity Fest, electronic devices such as mobile phones can be the perfect witness. They tend to be impartial, and they have long, almost perfect memories.

However, Bates’ attorney Weber argues that memory might not be so perfect, noting the danger of taking statements out of context. Amazon itself declined to provide detailed data from the Echo, much to the chagrin of police who had seized the Echo in an attempt to extract data from it. The cops were pretty much out of luck. The Echo itself doesn’t have much computing power. The data are stored in Amazon’s cloud.

Amazon Echo, which offers Amazon’s Alexa Voice Service, is a wireless speaker and voice command device. Echo is a 9.25-inch cylinder speaker with a seven-piece collection of microphones. Echo can use either “Alexa” or “Echo” as a “wake” word, triggering the device to record the user’s requests, execute commands, offer helpful advice—or act as a stool pigeon for the cops.

Google has its own potential police informant with Google Home, and at this week’s Consumer Electronics Show in Las Vegas, LG will be getting into the game with its Hub Robot. All these products are designed to make one’s life easier.

Gone are the days when one must go through the laboriously exhaustive exercise of touching a keyboard or swiping a touchscreen. With Echo, Home, or Hub Robot, one need only speak, and the answers come spewing forth.

This launch of smart devices communicating with corporate servers, described as the “Internet of Things” (IoT), brings both modern headaches and data privacy concerns—and Amazon Echo isn’t the first IoT product to raise these concerns.

For instance, organizations ranging from the Campaign for a Commercial-Free Childhood to the Norwegian Consumer Council have called for changes to the Genesis doll, My Friend Cayla. Consumer groups accuse the allegedly nefarious voyeur, Cayla, of spying on children.

Not unlike her Orwellian big sister, Alexa, Cayla records conversations. Children can ask My Friend Cayla questions, some of which are transferred to the speech-to-text software company, Nuance Communications.

An even bigger fear is that My Friend Cayla’s Bluetooth functions could be hijacked by nefarious characters dangerous to little children.

Of course, Alexa and Cayla aren’t the only agents lurking in and around your home. Everything from your television to your refrigerator to your General Motors car with OnStar tracking is monitoring you, and the ability of your possessions to conduct surveillance is getting creepier all the time.

Amazon Echo may not provide the smoking gun in State v. Bates. As noted above, Echo is activated by a wake word, such as “Alexa,” and none of the hot tubbing gentlemen may have uttered the word during the relevant period for the investigation.

However, even if Alexa doesn’t become the critical informant in Bates, her work will have been done by raising awareness about the data privacy considerations of the Internet of Things. No offense to the clandestine Cayla, but the Amazon Echo Murder is a bigger matter.

By last year, Amazon had sold 5.2 million Echoes—and that was before the 2016 holidays, when Amazon reported it sold nine times what it sold over the holidays in 2015. With Google and LG in the market as well, the data privacy of electronic personal assistants is about to become a big deal.

If States v. Bates were a civil matter, the Echo data would probably make it into evidence. Now, here on The Relativity Blog, we give only friendly advice, not legal advice. However, we have to employ the lawyer’s mantra, “It depends,” because it really does depend on how prosecutors drafted their request.

Nevertheless, a request tailored narrowly to get specific information from a brief moment in time would probably pass muster.

Time will tell whether the court in Bates rules a person’s home is his castle—even if Alexa is listening.