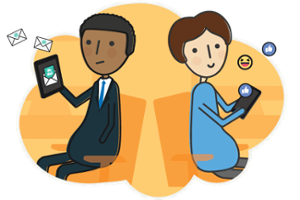 This article originally appeared on Law360.

In our daily work lives, we see a fair amount of anecdotal evidence indicating many of us engage in workplace behaviors that put our personal privacy and company data at risk.

But, how serious is the problem?

To find out, kCura recently commissioned a Harris Poll survey conducted between December 28, 2016, and January 18, 2017, included 1,013 U.S. adults age 18 and over who were employed full-time or part-time, working in a traditional office setting for at least 50 percent of the time (referred to as “employees” throughout) to get a better idea of just what employee behaviors may be putting corporate enterprises—and themselves—at risk.

To those of us who work in e-discovery law, the results probably come as little surprise. The news for the corporate enterprise is somewhat ominous: the era of big data for employees could lead to big risk for employers.

Most information governance experts agree having written corporate data polices is one of the most fundamental necessities for mitigating big data risk. However, the data from the survey that was conducted by Harris Poll indicate most companies lack policies and procedures or, if they have them, their employees don’t know about them.

For instance, 63 percent reported their companies either have no written policy on checking personal email or other personal accounts while at work or if the company does, they don’t know about it.

In litigation, regulatory proceedings, or investigations, email retention can make or break the case. Companies have faced substantial litigation sanctions and regulatory fines for failure to preserve email, and the poll results don’t bode well for corporate risk here.

For example, in a 2016 decision, US District Judge Leonard Stark in Delaware sanctioned an electronics company $3 million in punitive sanctions plus costs for its unlawful deletion of email. In another case, a major airline faced multiple discovery sanctions, including court sanctions of $2.7 million in August 2015 for discovery failures.

Social media are an ever-increasing presence in the workplace, with social media data often becoming evidence in litigation. Unfortunately, the news for the American workplace isn’t much better here, with 56 percent of employees saying their companies either had no social media policy or they didn’t know about it.

The amount of corporate data is growing exponentially due to advances in technology. For instance, the relatively tiny smartphones carried by many employees have more computing power than NASA’s Apollo spacecraft had. Not surprisingly, along with that greater computing power comes greater amounts of data.

However, it’s not just technological advances causing the big data explosion. Employee behaviors have a lot to do with it, too.

Over half of office workers (54 percent) say they email large groups of people at least sometimes when they are at work, while nearly a third (30 percent) concede that they at least sometimes “reply all” to an email when it needs only to be sent to the sender.

Employees report being copied on an average of 16 emails every day on which they say they didn’t need to be copied. Could this be a result of the somewhat trigger-happy use of reply all?

The survey indicates just about everyone cares about privacy. In fact, 98 percent of employees said privacy was important to them. However, their actions in the workplace belie their apparent concern for privacy.

In the poll, 60 percent of office workers said they’ve done at least one of the following things on their personal devices while connected to their employers’ WiFi:

A substantial number of employees engage in office behaviors that put their most sensitive information at risk, including their medical histories, financial matters, and legal issues.

Why the Survey Conducted by Harris Poll Matters

Put bluntly, the kCura survey indicates that employees’ data habits could be putting their employers at risk.

For instance, a large majority of office workers reporting that their companies either don’t have an email retention policy or that they don’t know about it is alarming, especially for e-discovery lawyers defending companies in litigation and regulatory proceedings.

Modern e-discovery software can go a long way in mitigating the risks presented by big data in the workplace, but even the best software can only do so much if there’s no retention policy—or if no one knows about it.

Another major concern is the disconnect between the importance employees place on privacy and the actions they take that jeopardize their privacy.

The following four best practices can help address these problems:

The kCura survey conducted by Harris Poll shows we have a long way to go in getting 21st Century technical education to the level of 21st Century technology. Employee data is putting employers at risk, and without sufficient information governance programs, the potential damage to the American workplace is substantial.

Method statement: This survey was conducted online in the U.S. by Harris Poll on behalf of kCura, makers of Relativity, between December 28, 2016 and January 18, 2017. The research was conducted among 1,013 adults age 18+ who are employed full-time or part-time, not a freelancer, and works in a traditional office setting for at least 50% of the time. Figures for age, gender, race/ethnicity, education, region, and household income were weighted where necessary to bring them into line with their actual proportions in the population. Propensity score weighting was also used to adjust for respondents’ propensity to be online.

Cybersecurity Regulation & You: Time to Become Part of the Solution