Practicing Case Strategy Through the Lens of History: Hamilton's Story 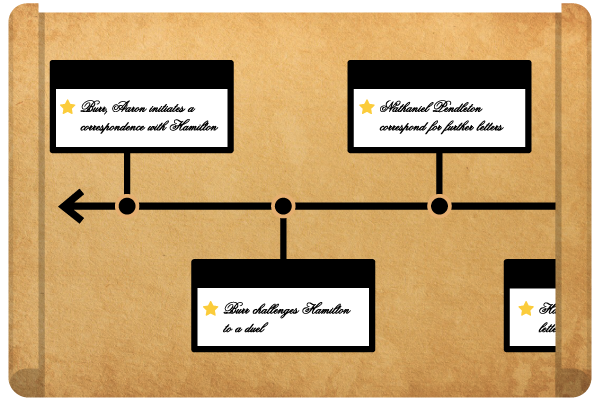 What happened? This simplest of questions lies at the heart of every legal case. If you’re unable to discover and articulate the truth—when did events occur, who was involved, and what legal issues are in play?—your chances of pursuing or negotiating a successful outcome will invariably be hindered. In other words, if you want to win, you and your case team need to know and agree on the facts.

Piecing together case timelines by organizing facts, issues, and key players is nothing new; successful case strategy has depended on variations of this process since ancient times. But in a world when electronic data is discovered, organized, and analyzed at unprecedented volumes and velocities, your case strategy methods must become smarter and more sophisticated to keep pace—especially with global case teams collaborating remotely in real time to meet pressing deadlines.

With those truths in mind, Relativity Fact Manager is a case strategy solution designed for the reality that your case is more than the sum of its documents. Beyond storing and organizing case details, it helps you build full case narratives and link key documents to facts, organizations, and people—then present a chronological progression of the facts using an interactive timeline that builds itself as you build your case.

To demonstrate the power of holistic case strategizing, Relativity’s training team recently developed a hands-on lab using Fact Manager for Relativity Fest 2017. We were excited to show the community just how approachable and visually engaging case strategy features can be when used to capture a compelling case story. As part of the challenge to build this lab, we gave ourselves three rules:

With those rules in place, the team soon realized our best bet was to comb through the annals of history to find our story. But we quickly found ourselves spinning our wheels searching for historical events that were associated with defined timelines and compelling narratives while also being linked with usable data.

We were at a standstill—until a chance discussion about US presidents prompted the name of one of the founding fathers of the United States: Alexander Hamilton. The same Hamilton whose story is told in a revolutionary Broadway musical which has become a cultural touchpoint. The same Hamilton who was a notoriously prolific writer of critically important documents such as the Federalist Papers. And the same Hamilton whose rocky relationship with Aaron Burr (himself a war hero, US senator, and vice president) spiraled into one of the most compelling and tragic episodes in American history.

So it was all smooth sailing from there, right? Not quite. For starters, we soon realized the team’s collective knowledge of Alexander Hamilton boiled down to an strange amalgamation of fuzzy memories, Lin-Manuel Miranda Lyrics, a picture on the 10-dollar bill, and a 1990s milk commercial. So we set to work researching and gathering information and were stunned at what we found.

While we knew Hamilton’s reputation as one who “wrote like he was running out of time,” we were flabbergasted at the abundance of materials we uncovered. Hamilton is associated with well over 10,000 documents compiled and preserved online in the National Archives, not to mention his thousands of collected files in the US Library of Congress and various other museums, libraries, and academic institutions.

We also learned that beyond Hamilton’s renown as the first Secretary of the Treasury and his notoriety as a participant in the duel that cost him his life, Hamilton was a successful lawyer. Both he and his rival/counterpart Burr were associated with many famous legal episodes: from working as co-counsels (the original “dream team”?) on the first murder trial in the United States for which there is a formal record, to Burr’s twin indictments for dueling and murder in New York and New Jersey.

But when it came down to determining how to present Hamilton’s story in a Fact Manager case timeline, it came down to one core element: the letters between Hamilton and Burr that escalated their rivalry beyond repair. Although most of the relevant correspondence was generated in 1804, because the letters have been digitized they could (like any other form of ESI) be loaded into a Relativity workspace and represented as the early 19th century version of an email conversation. As we delved into these “emails of history,” we wondered what they would reveal about why these two men were unable to reconcile their differences, and who (if either) was more at fault for the outcome of the duel. This, we realized, would also serve perfectly as the central question posed to our lab participants.

Once we had identified our scenario, time frame, and user challenge, we put on the hats of history detectives to set about solving the case on our own. We researched as many online resources as we could find, identifying the relevant documents (and key figures they were associated with) and compiling an outline that noted the facts, documents, and people in a chronology. To move this outline into Relativity, we copied the web-based documents into Word files and used the free Single File Upload application to drag and drop them into Relativity. The process of compiling our case outline in Word also translated surprisingly easily to Fact Manager—we simply copied and pasted text into the outline editor, made minor edits and formatting changes, and began creating links with a few clicks. While none of our team members are legal professionals by trade, we worked together like a case team as we collectively worked to input facts and documents.

Next, we drafted the lab instructions to mirror the same efforts we’d just undertaken—but this time we removed key facts, people, and document links from our completed outline so that lab participants could experience the fun and intrigue of becoming history detectives themselves. We provided just enough clues and guidelines to help them fill in the missing pieces without giving anything away. Finally, once all the facts were in place, we decided to throw in a little bit more excitement by adding a final puzzle based on a few historically accurate—yet still historically controversial—documents that may or may not prove Hamilton’s state of mind leading into the duel. Did Hamilton intend to kill Burr, or expose his own life to mortal peril by throwing away his shot?

While the answer to what happened in the last hours of Hamilton’s life may never be known, the lab we developed proved that using a case strategy tool like Fact Manager can be an effective way to organize and present fact-based findings and arguments—even when those facts are centuries—or terabytes, or miles—removed from the team investigating them.

Note: If you missed out on the lab at Relativity Fest, don’t worry—you’ll have another chance to examine the facts and make your conclusions at Legalweek 2018.

How To Practice Law Like Abraham Lincoln: Be an e-Discovery Lawyer!