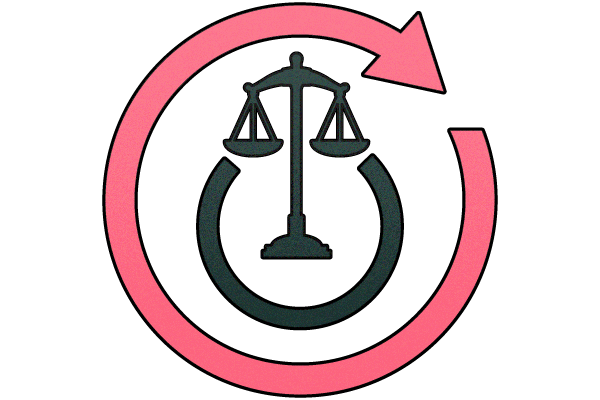 While it’s no secret that America has a huge justice gap, this topic is rarely addressed with the adequate care it requires. In 2017, 86 percent of civil legal problems reported by low-income Americans received inadequate or no legal help (2017 Justice Gap Report). Without the proper resources at their hands, people are left navigating our complicated criminal and civil courts on their own. This leads to unfair sentences, overworked and underpaid criminal defense lawyers, and no changes made to the court system.

The justice gap disproportionately affects America’s most vulnerable populations and costs local and state governments in particular extra money. While as a country we have taken some steps to address this problem, Band-Aids like granting every criminal defendant a lawyer through Gideon v. Wainwright have not created the systematic change our access to justice issue is begging for.

A Look at Rebooting Justice

Benjamin H. Barton and Stephanos Bibas took this issue into their own hands in their book Rebooting Justice: More Technology, Fewer Lawyers, and the Future of the Law. Bibas and Barton detail the history of the criminal and civil justice systems, arguing that our system is broken beyond repair.

For example, the authors posit that the ruling of Gideon has promised justice in a “poorly funded indigent defense systems and overloaded defense counsel” (Bibas and Barton 4). Their caseloads are excessive, and the number of criminal cases per year keeps rising, while the number of public defenders stays stagnant. Therefore, Bibas and Barton argue that defense lawyers are unable to properly do their jobs, and often resort to using the “meet ‘em and plead ‘em” strategy, leaving defendants with little room to argue their cases.

Bibas and Barton also suggest that the amount of work defense lawyers have on their plates far exceeds what they are capable of doing for their defendants, thus their jobs will never be able to be done well, and the death penalty or other harsh sentences can rarely be avoided. As Ruth Bader Ginsberg put it, “People who are well represented at trial do not get the death penalty.”

Bibas and Barton then propose their own changes to the criminal and civil courts. The authors argue that more technology, including online dispute resolution (ODR), in-court help kiosks, and online forms for civil cases will solve the access to justice issue once and for all.

While I commend Bibas and Barton for bringing such an important issue to light—an issue rarely addressed by lawyers—I want to push back on their key argument. They conclude that the way to solve this access to justice issue is adding more technology to our justice system and fewer lawyers.

But technology isn’t everything. Human expertise and compassion are critical components of successful legal strategies. So, I would have liked to see Bibas and Barton detail how we can make our lawyers stronger and more efficient instead of making the sweeping generalization that they are no longer necessary.

It is the lawyer who is both technically and legally astute, especially the techno-lawyer, who can help people better navigate our 21st Century legal system. Lawyers with the right knowledge, paired with the right tools to fuel their work, are the answer to the access to justice crisis plaguing our nation.

The Right Tools for the Right People

To create a more equitable, more effective legal system, we need to begin training our lawyers from early on about how to leverage all the legal technology tools at their fingertips in order to make their lives easier, lessen their burden, and do their jobs more effectively.

Tools like time and billing software, legal research software, and e-discovery software are transforming the way the law is practiced. If defense lawyers, namely criminal, had the ability to leverage these tools in every case they saw, the time spent on the average task would go down, thus giving these lawyers more time to focus on their caseloads and giving each defendant the attention they deserve.

David Hejna, general counsel here at Relativity, says that technology has completely transformed the way he practices law, arguing: “Lawyers generally love technology, especially lawyers in my age bracket who have seen all the changes. Imagine working with a secretary using a typewriter for complex documents.  We now draft and revise everything ourselves with higher quality results, and so much faster, in Word and by using our templates or doc generation programs. Imagine sorting through huge numbers of large storage boxes to work on discovery requests. We now have awesome e-discovery software platforms. Or imagine doing legal research in heavy law books at the law firm or the Cook County Law Library. We now find so much more information and higher quality results so much faster online.”

There are companies innovating to try and close the gap:

We are in a legal technology boom, and these are just three examples of the countless innovations that passionate people are building to make navigating our justice system easier for defendants and the lawyers that represent them.

Advancements in legal technology are creating big results for legal teams, and people want to see even more of them.

One example: Thanks to the help of online knowledge management, the Coordinated Advice and Referral Program for Legal Services (CARPLS) was able to increase their case load from 12,000 to 50,000 cases.

Recently, the Legal Services Corporation (LSC) hosted a summit, resulting in a plan to use a variety of legal technologies to close the justice gap by 100 percent. It’s thanks to research like this that people are also investing in technology. In 2018, Pew Charitable Trusts announced a new effort to begin investing in modernizing the civil legal justice system. The Federal Legal Services Corporations has over $45 million invested in 550 projects that help bridge this gap.

Furthermore, the digitization of the practice of law has completely changed the way lawyers practice for the better. “For anyone with a practice involving extensive legal research or discovery, the demise of paper in the practice of law has been the biggest change,” said David Horrigan, discovery counsel and legal education director at Relativity. “We lawyers were surrounded traditionally by paper—from the pocket parts in the state reporters in the library to the amber waves of Bankers Boxes in discovery productions. Pixels have replaced paper in the digital practice of law.”

Although easier, digital storage has resulted in a proliferation of data, it’s also meant better analysis and more accurate pictures of the facts of each case—both of which are a boon to lawyers’ strategies, whether in criminal or civil cases.

Legal technology is enhancing the work defense lawyers are doing like never before, and people are investing in these technologies. Technology is meant to help lawyers do their jobs better and defendants understand their rights better, not take the work of lawyers away. More technologically and legally astute lawyers are the only way we can begin closing the justice gap.

When it comes down to it, the math is simple: Fewer lawyers do not equal more justice.

Andie Linker is a member of the product marketing team at Relativity.

How You Can Help Solve the Access to Justice Problem