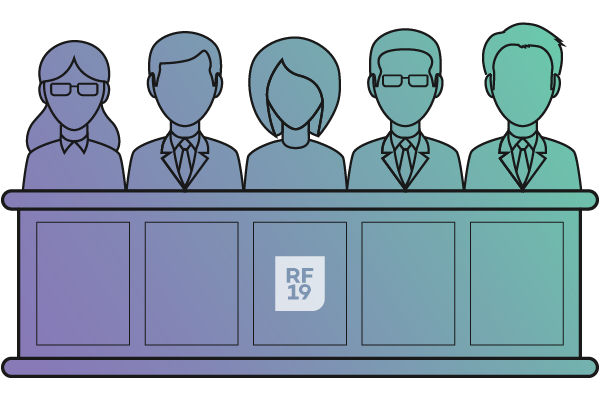 Though judges across districts have a wealth of knowledge to share, it’s rare to find an opportunity to hear from them outside of the courtroom. Of course, we’ve made it a tradition to make that happen at Relativity Fest each year with our annual Judicial Panel.

Our 2019 panel featured both familiar and new faces. Their insightful discussion meandered from privacy and copyright considerations to access to justice and production issues, and their advice for attendees was as valuable as ever.

Bottom line? Today’s lawyers need to build in better defense mechanisms, legislators need to be mindful of how technology is impacting not just personal privacy but public safety, and citizens need to stand up for their right to be heard.

The first case on the docket for discussion was Rosenbach v. Six Flags, in which a mother sued an amusement park company over their collecting her son’s biometric data—specifically his thumbprint—without her consent.

What most fascinated the judges about this case was a legal question at the heart of its credibility: Even though no breach of that data had occurred and the boy’s biometric information was not compromised, did the violation of his privacy made by the collection alone constitute a violation of the Illinois Biometric Information Privacy Act (BIPA)—and therefore support his mother’s right to bring the issue to court?

“There’s a policy here to maintain privacy, just as there is to uphold civil rights, so to that end, even though damages may not be incurred, there’s still a right to bring the suit,” Judge Fisher explained.

“This act was passed some time ago and I think it shows a lot of forethought on the part of the legislators. We’ll start to see the fruit in cases that are brought forward,” Judge Fisher went on. She predicted that we’ll start to see “more people starting to think about ‘How is this data being used? Who’s collecting it? Do they ever get rid of it?’ Those are policy questions on the use of biometric data that have not yet been established.”

Hon. William R. Matthewman—U.S. Magistrate Judge, (S.D. Fla.)—agreed, and touched on the fact that civil litigation isn’t the only issue at play here: biometric data is increasingly relevant to criminal cases as well.

“In capital litigation, there’s a statement that ‘death is different.’ Similarly, I think biometrics are different,” Judge Matthewman said. “These markers include fingerprints, voiceprints, scans of other identifiers—these are unique and can’t be changed. So where records can be expunged or redacted, biometrics are just part of us. The full legal ramifications of biometric technology is not fully known.”

Returning to the panel this year, the Honorable Tanya R. Kennedy—Justice, New York State Supreme Court, New York County—chimed in on those issues as well.

“The bottom line is that we don’t even know the harm that’s going to result [from collecting and holding biometric data]. What’s biometric data used for? It gives you access to an incredible number of places and data, including airports,” she pointed out. “So if that’s compromised, it’s not just a threat to personal privacy, but potentially public safety.”

In Georgia v. Public.Resource.Org Inc., on December 2 of this year, the United State Supreme Court will hear arguments to help them decide whether the annotations in Georgia’s official code of law can legally be copyrighted—or whether, as part and parcel of the law itself, they must remain in the public domain.

It’s an interesting case, and our panel explained that the Supreme Court decided to take it on partly because different jurisdictions have made very different rulings on similar matters. In fact, 14 states have official codes that include annotations. Some hold copyrights over that work product, and others don’t.

Of course, the Supreme Court has other reasons for taking on the case: “Lately our Supreme Court justices are very interested in property rights,” Judge Fisher explained. “You’ll notice there have been more patent and copyright cases coming before them.”

The details of this case in particular involve a commission of Georgia state employees working closely with a vendor to produce and publish these annotations as part of the official code, with approval and ownership claims over the content itself.

Public.Resource.Org, a nonprofit whose focus is making the law and legal documents more accessible to citizens via the internet, purchased the code via the state’s contracted vendor, and then uploaded it to their website so anyone could access it for free (among other distribution methods). The state sued them for copyright infringement. Resulting rulings have been made and appealed, so the case has made its way to the nation’s highest court.

Along the way, the 11th U.S. Circuit Court of Appeals ruled that the annotations could not be copyrighted (“but it was a close call,” noted Judge Fisher). Judge Matthewman, in whose jurisdiction that opinion is binding, weighed in: “The opinion was really interesting because it was determining whether annotations are part of [the law] or not. What [the judge] found was that, while not having the force of law, they are so enmeshed with Georgia law as to be inextricable.”

Justice Kennedy emphasized the issue of access to justice in this case.

“We see more and more self-represented litigants and they sometimes ask the judge during proceedings what the law is. Judicial ethics preclude me from answering that; I can explain procedure but certainly not the law itself, so I’ll refer them to online sources and the like,” she said. “Thinking about this case, citizens have the right to unfettered access to legal aids that govern their rights.”

Keep Your Privilege to Yourself

The third case discussed by our panel was presided over by one of our panelists: the Honorable Xavier Rodriguez, U.S. District Judge, (W.D. Tex.). The ongoing Bellamy v. Wal-Mart Stores Texas, LLC features a cautionary tale of privilege and e-discovery best practices, which Judge Rodriguez was happy to share with attendees.

The case was brought by a customer who tripped over a pallet in a Wal-Mart store and suffered injury as a result. The largest e-discovery dispute of the case came when a paralegal working for Wal-Mart counsel accidentally produced a cache of privileged material to opposing counsel. Wal-Mart filed a clawback request, and plaintiffs are filing a motion for sanctions with supposed proof of bad conduct by the defendants.

Judge Rodriguez began his explanations of the case with a familiar warning for Fest attendees: “This could’ve been solved easily if they had a 502(d) order. I suggest to all my parties in my scheduling conference, ‘Why don’t you consider a 502(d)?’ But in this case, neither party took me up on it.”

Still, Judge Rodriguez found that “reasonable steps were taken to prevent disclosure, reparation was happening, and it was an accidental disclosure when those documents moved across. So the clawback was granted.” But, he said, this is far from an ideal scenario. Documents involved in a clawback can’t be used by either side through the remainder of the litigation, so the producing party may often “wonder if they did the right thing by making that sacrifice.”

Regarding the alleged bad conduct and other e-discovery snafus involved in this case, Justice Kennedy shared a word of caution with the audience: “A judge never forgets when you are less than credible—it’s not good for you.”

She also added that it was debatable whether the paralegal who accidentally produced those materials was under sufficient supervision when it happened—or whether he or she should’ve been tasked with the important job of identifying privileged materials at all.

“Another ethical issue with respect to duty of lawyers is the need to supervise persons under their employ,” Justice Kennedy said. “These folks should be supervising junior lawyers and other staff working on a case, and they should be doing that well.”

Judge Matthewman had a no-nonsense injunction for the e-discovery professionals in attendance at the panel.

“[Accidental disclosures] engender a lot of unnecessary and time-consuming litigation which would not occur if you folks could somehow figure out how to not disclose that information in the first place,” he said.

Judge Rodriguez had similarly direct thoughts: “There’s no such thing as a good privilege log,” he told moderator David Horrigan when asked what makes for a good log. (Amidst the laughter of the crowd, he added the caveat that “If a judge has to see it, it’s not good.”)

Closing with a Call to Action

Though the panel ran short on time and couldn’t dive too deeply into their final case, we briefly heard about Robles v. Domino’s Pizza. Justice Kennedy explained that, in this case, the visually impaired plaintiff accused the pizza franchise of violating the Americans with Disabilities Act by not making their website and app usable by persons with disabilities. The 9th U.S. Circuit Court of Appeals found in favor of Robles, and Domino’s petitioned the Supreme Court to review the case. The Supreme Court recently denied that petition.

Justice Kennedy emphasized the necessity of not just empowering all people to participate fully in society, but also allowing citizens to be heard when their rights are violated.

“Access to justice, in my personal opinion, isn’t just about having an attorney, but having the right to make an argument and be heard before the court.”

Dig Deeper: Soft Skills You Need to Succeed in Legal

Why (and How) Today's Lawyers Should Work Smarter, Not Harder