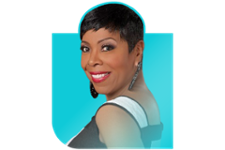 “The only constant is change.” Heraclitus captured this truth almost 2500 years ago, yet it remains true today.

How has broadcast radio, a 125-year-old industry constantly on the brink of disruption, innovated to stay relevant and fresh as ever to a majority of Americans in the 21st century? And what can legal operations teams learn from examining this evolution?

As part of Fest Focus: The Corporate Vision, a track of sessions exclusively for in-house corporate attendees at Relativity Fest 2019, we had the privilege of hosting a celebrity guest for an inspirational session centered on addressing issues of change and disruption. Radio personality Shirley Strawberry, co-host of the nationally syndicated Steve Harvey Morning Show, shared lessons she has learned from over 30 years in an industry perpetually on the cusp of disruption.

Shirley shared her experiences from a particularly tumultuous period of change for the broadcast radio industry. From the late 90s to the late 00s, there was an absolute explosion in the number of ways people could consume information and entertainment.

More and more people were getting online; devices like TiVo allowed them to take more control over when and how they consumed programming; peer-to-peer file sharing like Napster was turning the music industry on its ear; satellite radio meant an increase in choices available to consumers; Netflix spelled the demise of outdated models like Blockbuster; Google Ad Sense was taking an increasing share of ad budgets that once went to newspapers and radio; and the rise of social media meant a fundamental shift in the way people communicated. All of this happened over about a 10-year period, and it all influenced how people listened to radio.

For Shirley, it’s clear these innovations were driven by a common thread: a pent-up desire among listeners for greater control, greater choice, greater connection. She shared with attendees why broadcast radio could continue to deliver in this new world.

“I think that radio does two things really well. First, it is super accessible. Everybody has access to a radio, and they are cheap and easy to use,” she began. “Second, it scratches an itch that is primally fundamental to what it means to be human: a need for storytelling. Now more than ever, in a world that can feel increasingly disassociated and disconnected, people have a need for storytelling. They seek out that ‘theater of the mind.’ Stories help us navigate life’s social problems and help us to make sense of complex situations.”

By leveraging strategies like aligning programming with cultural trends—including the rise of competing media channels—and utilizing social media to build a closer connection to her followers, Shirley explained how she has embraced changed and used tools of disruption to deliver more value to her audience.

Speaking to a room full of attendees facing fast-paced change across industries—including legal, technology, manufacturing, and more—Shirley made clear the reality that disruption is always on the horizon.

“Hey, that’s life,” she said. But it doesn’t have to leave teams floundering.

Shirley left us with four key lessons she has learned from spending her career on this roller-coaster of repeat transformations. They feel especially relevant for legal teams in a time defined by regulatory change, technological innovation, and business transformation.

Embrace change, lean into it, and don’t be afraid. It is only a matter of reframing your perspective.

“The power of reframing perspective cannot be overstated. The circumstances of our lives matter less than our perception of the control of those circumstances,” she continued. “When you become an adult, you don’t grow in inches—you grow in terms of how you deal with change. If you deal with it the right way, you can come out on the other side and be fine.”

2. Have dreams, be impressionable, and be inspired.

Be open to inspiration. Be interested in what’s happening on the landscape of your field.

Find things that move you. If you are trying to do something you don’t care about doing, you won’t be able to keep it up for the long run. You have to seek out that kind of inspiration—it won’t just find you.

To do this, expose yourself to different ideas and the big things other teams are doing.

Maintaining an open mind and fresh perspective, and being impressionable with regards to what you learn, can help you anticipate changes as they appear on the horizon—and be better positioned to prepare for them.

3. Be on the lookout for indirect synergies.

Listening to Shirley, I learned that you need to be ever mindful of what emerging social trends or technologies are out there, how you can plug into them, and how they can play a role—directly or indirectly—in helping you to meet the needs of your stakeholders.

It’s important to understand the other ways customers can get their needs met outside of your offering. Keeping a pulse on these emerging trends is going to be the tactic that will allow you to stay fresh and to make the greatest innovative leaps.

4. Keep a pulse on the value you deliver.

People don’t buy products; they hire products and services to do jobs for them. It is up to you to be mindful of what the needs are of the people you serve, how those needs are changing, and how else they might be meeting those needs. Only with this knowledge can you adapt to changes as—or before—they happen.

This might require you having to reframe your perception of what you do, who you are doing it for, or how you do it. That might be uncomfortable, but if you don’t do this work, you will become “lost in the sauce” and at a loss for direction.

Shirley Strawberry is the co-host of the number-one urban radio morning show, The Steve Harvey Morning Radio Show. Steve Harvey has dubbed her “the best voice in radio.” She started her career in Chicago as co-host of The Doug Banks Show, then was offered a spot on The Beat, KKBT-FM, in Los Angeles. After Radio One purchased the station, she accepted the co-host position for Steve Harvey’s new local radio show, which was number one from 2000 to 2005. The show later moved to New York City, becoming a number-one local show there before expanding to a nationally syndicated show in more than 60 markets, with nearly eight million listeners.

Dylan Salisbury is a product marketing manager at Relativity, where he specializes in understanding and serving the corporate community.