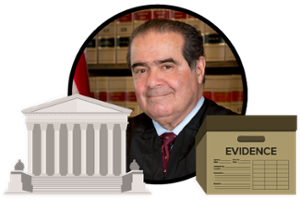 The past week has been filled with remembrances of the late associate justice of the U.S. Supreme Court, Antonin Scalia. The longest-serving jurist on the nation’s high court was a lightning rod for controversy, mostly on the social issues of the day.

But what about e-discovery?

Believe it or not, there has been a “Scalia Legacy” in e-discovery data law, most notably on digital data privacy rights—though you may not have heard about it in general media coverage over the years.

Make no mistake: Antonin Scalia was very conservative, and so was his jurisprudence. However, merely labeling him “right-wing” paints with a broad brush that is imprecise at best and misleading at worst.

When you look at his jurisprudence on the First and Fourth Amendments, you find more nuanced positions that really do have an effect on how we do our jobs in e-discovery law. That’s before you even get to Scalia’s impact on international e-discovery.

Scalia was the last justice remaining on the high court from what many of us consider the most important U.S. case in international e-discovery law, Societe Nationale Industrielle Aerospatiale v. U.S. District Court, 482 U.S. 522 (1987). Scalia was part of a 5-4 majority in Industrielle Aerospatiale. Had Scalia gone the other way, international e-discovery might be very different today.

This case of the crash of a French aircraft in Iowa established the attitude among many federal judges that U.S. law trumps international law when it comes to what must be produced in discovery.

Of course, it’s never that easy.

Industrielle Aerospatiale doesn’t say simply, “French blocking statutes and the Hague Evidence Convention be damned; we Americans will do what we want!”

Instead, the Supreme Court articulated a five-pronged comity test to determine whether documents must be produced when there is international legal disagreement.

Whether one agrees or disagrees with the legal holding in Industrielle Aerospatiale, the decision—and Scalia’s vote on it—have affected international e-discovery law.

We should note that some refer to the case as a 9-0 decision. However, Justice Blackmun’s partial concurrence/partial dissent—in which Justices Brennan, Marshal, and O’Connor joined—called for a more deferential position toward the Hague Evidence Convention.

Had Scalia joined the Blackmun camp, it would have had a profound impact on e-discovery. As of this week, courts and legal journals have since cited the case 3,571 times.

Most Americans don’t realize that—prior to the U.S. Supreme Court’s June 2014 decision in Riley v. California, 573 U.S. 1 (2014)—when police stopped you, they could take your mobile phone and examine the data on it.

However, in a sweeping 9-0 consolidated opinion deciding both Riley and United States v. Wurie, the United States’ highest court held that, in most cases, police must obtain a warrant before searching mobile phone data from a person who has been arrested. Although the court was addressing police searches of mobile data in its decision, the culmination of these cases is a significant legal development with potential impact beyond drug deals and gang violence.

Why does it matter for e-discovery? Because of the expansion of bring your own device (BYOD) policies, there are far more corporate data on personal devices across the nation. Before Riley, this corporate data could have been compromised—perhaps even becoming public records.

In these decisions—all 5-4 decisions in which Scalia wrote the majority opinion and where his vote made law—the justice sided with criminal defendants against law enforcement in evidence cases. As with Riley, some may wonder what criminal cases have to do with e-discovery, especially when the facts of the cases are so far from e-discovery in complex commercial litigation. It’s because—like e-discovery cases—these are cases about the admissibility of evidence.

In Jardines v. Florida, 569 U.S. 1 (2013), Scalia wrote for the 5-4 majority that police bringing a dog to a suspect’s front porch to search for contraband constituted a search for Fourth Amendment purposes.

In Kyllo v. United States, 533 U.S. 27 (2001), Scalia and the majority held that law enforcement must have a warrant when using thermal imaging equipment to identify excess energy—possibly indicative of a large criminal enterprise.

Finally, in Melendez-Diaz v. Massachusetts, 557 U.S. 305 (2009), Scalia and the majority held a forensic technician’s laboratory report to be used in a criminal prosecution constituted testimonial evidence subject to the requirements of the Sixth Amendment’s confrontation clause.

Not unlike Riley, these 5-4 Scalia majorities were in criminal cases. However, as we note above, they’re all about evidence.

In addition, the law is not sacrosanct. Decisions from one legal area often affect others. From the European Union to Brazil, litigants in e-discovery know that privacy rights are a critical part of e-discovery. In Riley and in the 5-4 decisions, Scalia and his majorities put limits on the admissibility of evidence, with three of the four cases basing these limits on privacy rights.

Europeans and others around the globe often think of the United States as a land where there are little meaningful data privacy protections and where the U.S. government takes data from everyone without legal due process.

At the same time, most Americans who follow the law think of Scalia in terms of Bush v. Gore, Citizens United, or Lawrence v. Texas.

Perhaps more importantly, we should remember there was once a very conservative justice who held for alleged drug dealers over the police because he believed the U.S. Constitution called for such a legal result.

As e-discovery practitioners, we should remember all these cases are all about getting evidence admitted. So yes, there is a Scalia Legacy for e-discovery data law.

6 RelativityOne Updates That Will Make You Faster and More Productive