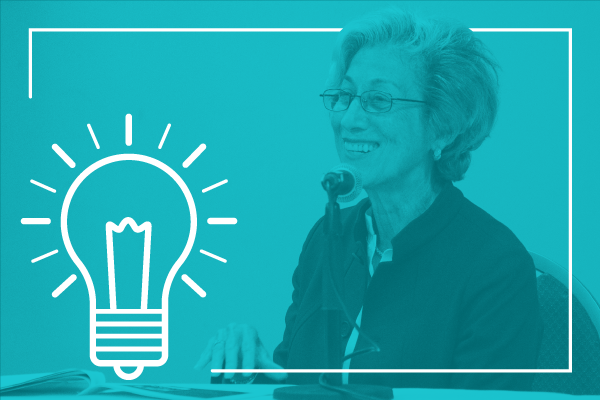 Many in the e-discovery community know Shira Scheindlin for her landmark decisions related to electronically stored information and the use of legal technology. While these decisions are notable, and have certainly shaped the field of e-discovery, they only scratch the surface of her admirable career.

Appointed to the bench in 1994 by President Bill Clinton, Shira Scheindlin spent 22 years as a federal judge for the Southern District of New York. Since retiring from the bench in 2015, she remains active in the legal community.

We had the honor of having Judge Scheindlin join us at Relativity Fest 2017, where she was interviewed by Ariana Tadler, partner at Milberg LLP and principal at Meta-e Discovery, about her life in the law.

The experiences and lessons she shared left me inspired and hopeful (and this is coming from a perpetually cynical twenty-something). While her resume can’t be covered in 1,000 words, here’s an overview of why I became an instant Judge Scheindlin admirer.

Judge Scheindlin oversaw several cases that have left a mark on e-discovery. She’s perhaps most known for her series of decisions in Zubulake v. UBS Warburg, LLC. When she issued Zubulake I in 2003, most lawyers hadn’t even heard the term “e-discovery.”

The plaintiff was a technologically-minded individual who knew there were electronic materials that would prove her case. She used technology to dig through data and found key documents that resulted in a large verdict and ultimately a settlement.

At the time, Judge Scheindlin was in an early camp of legal professionals and jurists thinking about the impact technology would soon have on the law. She took the time to write in-depth opinions about the case because of how it could shape the field: “It was a great opportunity to write, and I took it. I wrote on every single issue that came up in that case.”

Described by Judge Scheindlin as a “run-of-the-mill employment discrimination case,” the case turned out to have a large impact on the field, influencing the 2006 changes to the Federal Rules of Civil Procedure.

Justice No Matter the Case

While I could write an entire post—and probably even a book—about her e-discovery-influencing work, the cases that sparked my Judge Scheindlin fandom had nothing to do with data or technology.

Estimating that she sentenced around 1,500 to 2,000 people in her time on the bench, Judge Scheindlin presided over many criminal cases as well as her well-known civil suits. She oversaw three trials related to John A. Gotti, and on the civil side, a case regarding the misuse of solitary confinement—Peoples v. Fischer—which resulted in an $80 million class action settlement as well as solitary confinement reform in New York.

A criminal case against a material witness to the September 11 terrorist attacks, United States v. Awadallah, also played out in her courtroom. Osama Awadallah—an alleged acquaintance of two of the September 11 hijackers—was arrested, detained, and indicted for perjury. While we won’t get into the full story here, Judge Scheindlin oversaw the case, which ultimately resulted in a re-trial and an acquittal.

While it’s clear she’s been involved in several high-profile cases, some could argue that the biggest impact Judge Scheindlin had on the bench was when she ruled the New York Police Department’s practice of stop-and-frisk to be unconstitutional.

Stop-and-frisk is a policy giving police officers the power to stop, question, and search an individual if they have reasonable suspicion of a possible crime. A case claiming the NYPD was racial profiling in their practice of stop-and-frisk—Floyd v. City of New York—was brought to Scheindlin’s court in 2013.

According to the New York Civil Liberties Union, in 2012—the year prior to the ruling—there were 532,911 stops in New York City. Of those stopped, 55 percent were black, 32 percent were Latino, and 89 percent were exonerated.

While she found that the stop-and-frisk policy is allowed under the constitution, Judge Scheindlin ruled the NYPD’s practice of the policy was not. Additionally, she recommended a reform effort to ensure officers receive more training. In 2014—the year following the ruling—there were just 45,787 stops in the city. Even with this huge decline in stops, there was no rise in crime that year.

The ruling was controversial, and because it was Judge Scheindlin who made the call, she was at the center of the conversation. The US Court of Appeals for the Second Circuit stayed Scheindlin’s order for remedial measures. They also removed her from the case, claiming she gave an appearance of bias by participating in interviews with the media. Scheindlin denied discussing the case with reporters, and the Second Circuit’s action was itself controversial.

Hearing about these difficult cases left me in awe and gave me a new respect for those on the bench. Something Ariana Tadler said earlier in their interview stayed on my mind: “Nobody was a presumptive winner when you went before Judge Scheindlin. You had to make your case, and depending on how the facts and the law played out, that was how the ruling was going to play out.”

How does a judge cope when handling controversial and highly publicized cases? Judge Scheindlin said, “as long as you’re proud of your work and you did what you think was right, you get through it.”

Sharing the Voices of the Unheard

Since retiring from the bench in 2015, Judge Scheindlin has devoted her time to helping make the country a more just place. In addition to joining the Litigation Practice Group at Stroock & Stroock & Lavan and serving as a JAMS panel member, she takes on other projects using her legal expertise.

In a recent op-ed piece Scheindlin wrote for the New York Times—Female Lawyers Can Talk, Too—she dissects gender equality issues in the legal profession. She discusses how even though women make up about half of law school graduates, they aren’t getting the same roles as men in the courtroom or in their firms.

She helped the New York State Bar Association design a study asking judges to take note of who spoke in court. They found that “women were the lead lawyers for private parties barely 20 percent of the time in New York State’s federal and state courts at the trial and appellate levels.” Based on the study, the public sector was more equal when it came to gender.

The takeaway? She had advice for both sides of the issue. One tip for the audience is that we—and this wasn’t only directed at women—need to ask for opportunities. Judge Scheindlin suggested that as a young professional, “You have to learn how to help yourself by asking for the best assignment, asking for a speaking role in court, asking to be first chair, asking to take the deposition.”

In addition to a personal responsibility, Scheindlin discussed how change can’t be made unless law firms and corporations make sure their teams are diverse. She presented the compelling argument that diverse teams make better decisions because they have different perspectives. A diverse legal team is in everyone’s best interests.

Judge Scheindlin also helps bring diverse perspectives to the table by working with the American Immigrant Representation Project (AIRP). Many immigrants are kept in detention centers, isolated from nearby communities, making it hard for them to obtain a lawyer. This is a problem because those with a lawyer are 14 times more likely to stay in the country. The AIRP provides immigrants with legal assistance during removal hearings, giving them a fair chance to be heard.

Judge Scheindlin has made it her career to push for change, whether it’s leading the e-discovery community to the future, providing justice for those who have been wronged by the law, or speaking up for a more diverse profession.

If I haven’t convinced you to become a die-hard Shira Scheindlin fan yet, I recommend hearing her lessons directly from her in the session recording. There’s no way you can listen to her stories and insights without wanting to follow in her footsteps—and I don’t mean that we should all become federal judges. What we should do is think about what we can do for our industry and our society. If we’re given the opportunity to bring more justice to the world, it’s our obligation to take it.