Your Body Language in the Courtroom: The Dos and The Don'ts 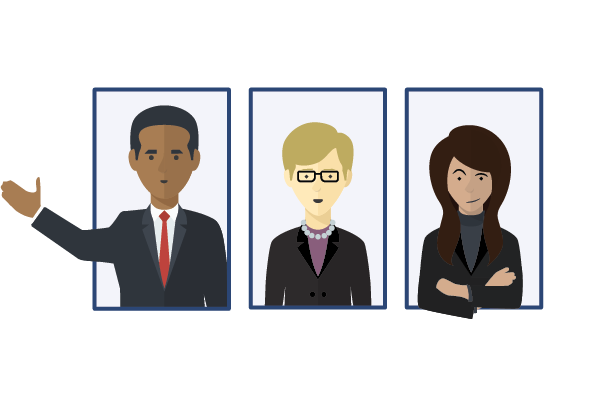 Editor's Note: First published in late February of 2020, these lessons became ... well, less useful, in a landscape that quickly moved away from in-person operations due to the COVID-19 pandemic. Now that many of these interactions are happening in person again, we thought we'd republish this article to help you feel more confident in your return to the courtroom.

Whether you’re talking to a group of friends or having a one-on-one chat with a client, you better believe body language will be there too. It pervades every interaction we have. And most of us think we know how to read it.

Crossed arms? The person’s closed off, maybe even upset.

Leaning in? Whatever you’re saying is riveting. Just riveting.

But, according to body language expert Alison Henderson, you may not know as much as you think.

“It’s the movement and the change in the movement that the brain is taking in. It’s not the pose,” Alison said during her Relativity Fest session on the topic. “Poses are learned behaviors and can mean different things in different cultures, while [movements] are universal.”

Basically, rather than reading someone’s static poses (liked crossed arms), Alison says you should be paying attention to how they move.

This is especially true in the courtroom, where attorneys often let presentation slides take center stage—when in reality a jury is going to be more influenced by how that information is being presented. In other words, how the attorney is moving.

So, whether you’re heading to the courtroom, a meet-and-confer, or any other important conversation, keep these dos and don’ts in mind.

Do keep your posture neutral.

We covered how static poses aren’t as revealing as movements, but that doesn’t mean you should throw good posture out the window, according to Alison. When in doubt, remember her rule of thumb: neutral is best. Arms at your side or at your middle, head over shoulders, hips over feet. And, of course, keep breathing.

And, if you need a little extra oomph, try to “put a little air in your pits.” In other words, slightly lift your arms to take up more horizontal space.

“People who are—or think they are—the leader will subconsciously take up more physical space. They’ll spread their arms, spread their papers on the table,” Alison said.  “It’s all subconscious, as if they’re saying ‘I’m here, I’m prepared. Ask me anything.”

Air in your pits = air of confidence and leadership. But, there’s a catch, says Alison.

“Jurors are noticing the consistency between you as the attorney at the table talking to your team, and you, the attorney on stage presenting your case. They’ll watch you more carefully when you’re ‘off duty’ and will look to see how real you are in other circumstances,” she explained.

So, if you’re going to air up those pits, remember to be consistent—both on stage and off. Even if they don’t realize it, the people in the room will subconsciously detect shifts in your body language.

Gestures (or talking with your hands) is one of the more prevalent movement patterns. We all do it. But, according to Alison, it’s not the gestures themselves that are important—it’s where they fall on the plane of your body.

Like posture, Alison champions for neutral gestures for the majority of your communication. She calls them “medium” gestures—those that happen at the height of your belly. They’re the sweet spot.

“This is where you want to be most of the time,” she said, talking with her hands at her core. “It’s the most trustworthy and knowledgeable, showing that you have nothing to hide.”

On the flip, high gestures—like raising your hands up to your chest or shoulder (or even higher)—should be used sparingly. And often, there’s some gender bias baked in.

“Women tend to gesture from their chest, which is often seen as emotional or even hysterical,” Alison explained. “Watch female attorneys and notice if their jurors start to give a ‘somebody farted’ face. We tend to be seen as more emotional.”

Instead, save those big, high gestures for emphasis and to signal to your audience that what you’re saying is important. It’ll intuitively trigger them to take note, and they’ll be more likely to remember it later.

Although you want to keep your posture and gestures neutral, that neutrality shouldn’t come at the cost of your humanness, warns Alison. Instead, always try to stay relaxed and just “a little bit mushy.”

“When we get nervous or things get tough, we tend to clamp down on our breathing and we stiffen up and look like robots. Holding on to your movements is a sign you’re withholding information.”

Moreover, tense movements and posture can cause the person you’re talking to feel closed off.

Do know whom you’re talking to.

These are individuals who, as the name implies, want a lot of information before making a decision or acting. In conversations, you’ll notice they often ask for clarification—all so they can ensure they’re making the right decisions.

You can spot a researcher by their movement patterns. They tend to twist their bodies (e.g. sitting with their shoulders facing to the side) and gesture horizontally.

If you see a researcher on your jury—or if you have one on your team—Alison advises giving as much information as possible. They’ll eat it up.

These are the folks who tend to see things as black and white—and often think they’re correct. You can identify a judge in conversation because 1) they’re asking a lot of “why” questions; and 2) their movements involve a lot of tipping (e.g. tipping their shoulders or tipping their head to one side as they analyze the information).

When it comes to dealing with judges, Alison has a trick: “Ask them a lot of ‘which’ questions—it makes them feel like they have power.”

Ah, the “bulls in a china shop,” according to Alison. Action heroes seize opportunities and want to get to work right away. They also tend to be like oil and water with a researcher. You can spot an action hero by their telltale deep, forward lean, as if they’re ready to jump out of their seat.

When working with action heroes, Alison advises that you give them something to do.

“Connect the dots for them with timelines. They want a clear, logical progression. Even say things like ‘picture this’ and ‘you might want to write this down.’”

Don’t worry about missing something.

Analyzing body movements is hard. But the good news is you don’t have to notice every twitch. In fact, that’s the beauty of what Alison teaches … it’s all about patterns.

“if someone leans forward, they eventually have to lean back,” she explained.

More than 70 percent of communication is nonverbal, according to Alison, so just think of what you can learn by paying attention to all the tips, leans, and twists. The more you can think strategically about your movement patterns and movement patterns of others, the better you’ll be able to communicate.

When in doubt, do as Alison says: “Take a minute to be quiet and just observe.”

Dig Deeper: Soft Skills You Need to Succeed in Legal