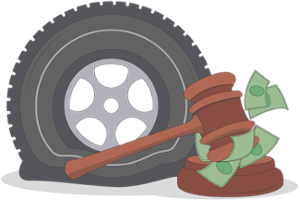 During the debates over the 2015 e-discovery amendments to the Federal Rules of Civil Procedure, one of the biggest points of contention was the change in the sanctions provisions of Fed. R. Civ. P. 37(e).

However, as we’ve discussed before, judges have methods other than Rule 37(e) to sanction bad behavior in discovery. In addition to tools such as Rule 37(b)(2), federal judges can sanction parties under their so-called “inherent authority.”

Federal judges certainly have better reasons for requiring litigants to respect their authority than does the South Park television character Eric Cartman. However, the US Supreme Court limited judges’ inherent authority this Tuesday.

In Goodyear Tire & Rubber Co. v. Haeger, the High Court held federal courts’ inherent authority to award attorney fees for bad faith conduct was limited to the amount the innocent party incurred specifically as a result of that bad behavior.

After sustaining serious injuries in the accident, the Haegers sued Goodyear in Arizona state court in 2005, alleging design defects in the G159. Goodyear removed the case to federal court.

The G159 has been the subject of litigation across the nation. Plaintiffs have claimed the tire—designed originally for delivery vehicles—was ill-suited for recreational vehicles, especially after federal speed limits were raised in the late 1990s.

The theory of the Haegers and other plaintiffs is that the tire was not designed to withstand the level of heat it generated when used on a motorhome at highway speeds.

However, the case turned from tort law to discovery law.

During the years of protracted discovery—in which the Haegers requested repeatedly for Goodyear to produce testing data for the G159—the district court had to mediate some contentious discovery disputes.

The Haegers finally settled with Goodyear for an undisclosed sum. However, after the settlement, the Haegers’ lawyer read a newspaper article about other G159 litigation in which Goodyear had produced test results indicating the G159 had become unusually hot at speeds between 55 and 65 miles per hour.

Goodyear conceded it had withheld the information, and the Haegers returned to court seeking sanctions for discovery fraud. Goodyear’s conduct, the Haegers argued, entitled them to attorney fees and costs.

Not surprisingly, the district court was not happy with Goodyear.

Litigation is not a game. It is the time-honored method of seeking the truth, finding the truth, and doing justice. When a corporation and its counsel refuse to produce directly relevant information an opposing party is entitled to receive, they have abandoned these basic principles in favor of their own interests. The little voice in every attorney's conscience that murmurs, “Turn over all material information,” was ignored.

Judge Silver expressed her exasperation with Goodyear’s conduct by using her inherent authority to award $2.7 million in attorney fees and costs as well as ordering Goodyear to file a copy of her order sanctioning its behavior in any subsequent G159 litigation.

Because the court found the conduct of Goodyear and its attorneys to be so egregious—citing Charles Dickens by saying Goodyear’s bad behavior had turned the case into an endless “Arizona version of Jarnydce and Jarndyce”—she said establishing the causal link between the bad behavior and the cost incurred was, “of necessity, somewhat imprecise.”

Because the case had been settled, Judge Silver couldn’t do what she wanted to do—enter a default judgment as a sanction against Goodyear. Instead, she did what she could for the Haegers: reimburse them for attorney fees and costs paid from the time of Goodyear’s first dishonest discovery response.

Goodyear appealed the sanctions, but the US Court of Appeals for the Ninth Circuit affirmed.

However, because Judge Silver’s $2.7 million award exceeded the actual costs incurred due directly to the bad conduct, the Ninth Circuit’s decision created a circuit split with the Fourth, Seventh, and Eighth Circuits, which had limited such awards to fees or costs that are causally related to a litigant’s misconduct.

Thus, the US Supreme Court granted certiorari to review the award in Haeger.

In a unanimous 8-0 decision on April 18 (newly appointed Associate Justice Neil Gorsuch did not participate), the High Court reversed the Ninth Circuit, throwing out the $2.7 million award.

Siding with the Fourth, Seventh, and Eighth Circuits, the Supreme Court held a federal court exercising its inherent authority to sanction bad faith conduct by ordering a litigant to pay the other side’s legal fees is limited to awarding the fees the innocent party incurred solely because of the misconduct or—put another way—to the fees that party would not have incurred but for the bad faith.

Citing its holding in Link v. Wabash R. Co., 370 U.S. 626 (1962), the High Court conceded that federal courts possess certain “inherent powers,” not conferred by rule or statute, “to manage their own affairs so as to achieve the orderly and expeditious disposition of cases.” The court added a citation to Chambers v. NASCO, Inc., 501 U.S. 32 (1991), in which it noted that authority extended to sanctions for conduct that “abuses the judicial process.”

However, citing its decision in Mine Workers v. Bagwell, 512 U.S. 821 (1994), the Supreme Court noted that when imposed pursuant to civil procedures, such sanctions must be “compensatory rather than punitive in nature.”

Thus, the court held, “The fee award may go no further than to redress the wronged party ‘for losses sustained’; it may not impose an additional amount as punishment for the sanctioned party’s misbehavior.”

As we’ll be discussing next week at Relativity Fest London, English and American courts have borrowed much from each other—Americans, of course, borrowing more legal tradition from their British cousins than the other way around. One of those traditions we share is the former separation of courts of law and equity.

In simplified terms, courts of law dealt with what laws, rules, and statutes dictated—while courts of equity ruled on the basis of what was fair. When the Federal Rules of Civil Procedure were first enacted in 1938, the Federal Equity Rules went by the wayside.

We now consider the principles of law and equity to be combined in our rules. See Stephen N. Subrin, How Equity Conquered Common Law: The Federal Rules of Civil Procedure in Historical Perspective, 135 U. Pa. L. Rev. 909 (1987).

That being the case, shouldn’t federal judges have the authority to hand out sanctions based on what is fair? After all, rules can have unintended—and unfair—consequences.

On the other hand, do we need powerful checks and balances on unbridled judicial power? After all, to paraphrase John Adams with 21st Century sensibilities: we are a nation of laws, not of men and women.

In Haeger, the Supreme Court maintained that—because a court’s inherent authority is an “undelegated power”—it should be used with “restraint and discretion.” Thus, the court reasoned, judges must establish a causal link between misconduct and fees when acting under inherent authority.

Of course, had Goodyear’s discovery misdeeds in Haeger been uncovered before the case settled, the outcome would have been different. Judge Silver could have—and likely would have—dropped the nuclear bomb of sanctions, the default judgment, on the tire company.

Haeger matters because the US Supreme Court resolved a circuit split by limiting judges’ authority to mete out sanctions. However, wayward litigants and lawyers should remember that—although few may respect the authority of Eric Cartman—the sanctioning authority of federal judges is still substantial. The doctrine of South Park sanctions survives.