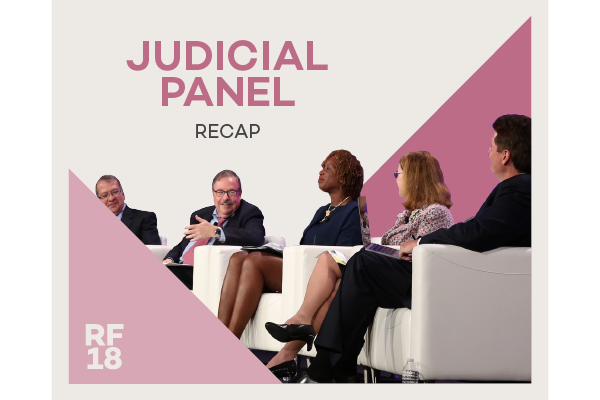 Though it’s a niche field, e-discovery is like a microcosm of the larger legal space.

It’s an incubator for top-notch technology, with high-stakes projects driving innovative strategies and maturing client expectations. It’s also a community of experts—noisemakers in a profession that’s ripe for evolution and improvement.

A favorite staple of Relativity Fest is our annual Judicial Panel, which brings experts from behind the bench before a few thousand of these enthusiastic legal professionals from around the world.

The 2018 Judicial Panel featured some firsts: a state court judge, case studies beyond e-discovery, and a spotlight—and call to action—on diversity in the legal profession.

Top-of-mind topics on the table for this year’s panel included the legality and ethics of using ephemeral apps for business purposes. Does disappearing data function like a phone call, or does it cross the line into spoliation?

Discussing the Waymo v. Uber case from earlier this year—in which the two companies battled over accusations of intellectual property theft—U.S. District Judge Xavier Rodriguez (W.D. Tex.) examined the accusation that Uber used ephemeral app Wickr with the intention of hiding their trail.

Judge Rodriguez had a clear opinion to share on the subject.

“Getting back to the basics of e-discovery,” he said, “we know we have a duty to preserve data once we know litigation may become likely. In this case, we knew a trigger occurred—the accusation of [IP] theft—so should litigation hold have been made applicable to Wickr use? The [judicial] opinion [in this case] doesn't really answer that clearly.

“You could argue Wickr is like the modern phone call, where you can have conferences with fellow employees without putting anything in writing that needs preserving. That's not illegal,” he noted. “But I think the better analogy is that this is not a phone call, so if you make a decision to use an app like this, you have the duty to preserve—just like you would after recording a phone call.”

Judge Rodriguez’s distaste for using these apps despite active legal hold obligations was clear, although he did note that the rules still aren’t hard-and-fast.

It captured the rest of us, too.

Judge Fischer explained the case’s debate over investigators obtaining cell tower data (which shows location information for a cell phone user) to track down a man accused of robbery and other crimes: “investigators wanted not a day’s worth [of cell tower data], but many days, so they could track the activity of Mr. Carpenter. The district court and Sixth Circuit felt that was appropriate under prior precedent, such as phone records and business records being public.”

However, that interpretation of the law didn’t last.

“Interestingly, when it got to the Supreme Court, Justice Roberts decided there was more at stake—including the expectations of privacy,” Judge Fischer continued. “So the court ruled that in this type of case moving forward, law enforcement will need probable cause to obtain this information.”

The careful specificity of the ruling left other questions open, though.

“I thought it was interesting was that the Supreme Court did not overrule the Third Party Doctrine, but created a narrow exception to say this was a special rule for this type of information—and ‘we'll worry about the third party and other doctrines indicated here in other cases,’” commented retired U.S. Magistrate Judge Andrew Peck (S.D.N.Y.), who is now senior counsel at DLA Piper.

Tactics for Your Cases—and Your Career

“One of the reasons we picked this case was so you can use it in your own litigation and preparation,” Judge Peck told the audience.

Judge Peck explained that Levi Strauss sued a European company for allegedly manufacturing and selling knockoff jeans that violated Levi’s trademarks. On the hunt for evidence of the number of imitation products, and faced with international e-discovery laws and spoliation issues that prevented them from finding them via typical means, Levi Strauss requested data from Archive.org to support their case.

“For the last 20 years, [Archive.org] has daily surfed the web and copied websites so you can go back and see what was on that page 10 years ago on a particular day and time (provided they crawled it),” explained Peck. Known also by its common name, the Wayback Machine, this digital archive of the internet’s many pages is managed by a non-profit and makes its data publicly available. Judge Peck encouraged legal teams in the audience to make creative use of it in their future cases, as the opportunity arises.

But the judges had even bigger advice for the audience: contributing to greater diversity in the legal profession will improve your career and the careers of generations to come.

Justice Tanya Kennedy (Supreme Court Justice of New York State, New York County) brought SEC v. Adams, No. 3:18-CV-00252 (S.D. Miss. June 1, 2018) to the panel. Writing a decision on the selection process of court-appointed receivers for the case, U.S. District Judge Carlton Reeves issued an opinion critical of what he saw as a lack of diversity in the bench and bar.

Justice Kennedy, who is president of the National Association of Women Judges, lauded Judge Reeves’s writing as an important example of decisive action toward greater diversity and inclusion in a legal profession that’s rife with imbalance.

“In spite of the fact that women now outnumber men in law schools, that distribution isn't reflected in the judiciary or legal profession,” said Justice Kennedy, citing that only about 33 percent of Article III judges are women.

She pointed to issues of pipeline as much as selection, and Judge Rodriguez agreed: “As regular citizens, we need to be concerned about the pipeline. For blacks and Hispanics right now, high school graduation rates have declined. And when you look at the costs [of higher education] increasing, that pipeline becomes even more narrow—[and later in] law school too—so it’s not bringing in the numbers we want to see. The problem is not limited to the legal profession; we have some serious issues as a society to solve this problem.”

“All of us have a responsibility to increase the pipeline,” said Justice Kennedy. “As I sit here today I am the product of the pipeline: someone saw something in me—my potential—and gave me the opportunity to prove that I was up to the task of this work.”

The motivation for making those changes is, Justice Kennedy said, critical to the mission of every legal professional in the room: “Justice is a search for truth. That search will fail if a court does not incorporate a wide array of experiences, facts, and perspectives into its decision-making processes.”

Despite these sometimes gloomy conditions, the judges seemed to agree that the forecast for the legal profession can be sunny.

“I am optimistic,” Justice Kennedy said, addressing the audience. “But we have to take action. We do that by forming strategic partnerships with concerned individuals like you all to build alliances and create opportunities, for all these groups. It’s not about race—it's about all of us. I'm not afraid to lend my voice to speak truth to power and to perform outreach to young people to invite them to join this legal profession.”

Neither, she seemed to imply, should the rest of us be—and neither is Judge Fischer.

“There is truth in a diverse judiciary and diverse legal profession. So we're encouraging all judges in our court to call on the younger person who might be part of a panel of lawyers appearing before us—and others are doing this around the country and on this panel,” Judge Fischer explained.

Engaging younger attorneys to help them stand on their own two feet in the courtroom is an important step toward bringing more diverse, more inclusive perspectives to the legal world, and everyone can help contribute to that encouragement.

“It’s not just the judiciary or law schools, but the legal profession as a whole—law firm structures, corporations, and individual clients—who need to give these young and diverse people a chance. This can be done, and it can be done fairly easily,” Judge Fischer concluded.

Overall, the judges voiced positive impressions of the many perspectives apparent in the Relativity Fest audience at large—and made it clear that, if we’d all do our part to forward diversity, innovation, and passion within the legal world, the future of this space is bright.

3 Ways to Close e-Discovery Communication Gaps with Your Clients