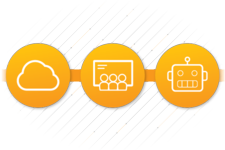 The legal technology community gathered in New York for the Legalweek conference January 30-February 2. Although the event is now in its second year since expanding from the venerable Legaltech into the nascent Legalweek with additional conferences—including the Business of Law Forum and LegalMarketing—the Legaltech conference remains the biggest component of ALM’s Legalweek.

Legalweek is still basically a legal technology conference, and whether it’s the legal profession’s acceptance of the cloud, artificial intelligence and e-discovery in the classroom, or crusading robots in duels and hospitals, legal technology carried the day.

Perhaps the most noteworthy thing about the discussion of e-discovery in the cloud is how non-controversial the legal cloud has become. SaaS has been commonplace in other industries for quite some time, and legal is now joining the party.

In the educational session Global Discovery in the Cloud, Chris Dale of the eDisclosure Information Project moderated a panel of Meribeth Banaschik of EY Germany GmbH, Steve Couling of Relativity, Johnny Lee of Grant Thornton, and Rachi Messing of Microsoft.

The ubiquity of the cloud was apparent, as Microsoft’s Messing noted there are now over 120 million users of Office 365.

Relativity’s Couling noted the increasing adoption of the RelativityOne SaaS offering and put the whole thing in perspective: “I think the days of the cloud being perceived as a hipster in a coffeeshop are over.”

GDPR and a Majestic Incoherence

Not surprisingly, Europe’s General Data Protection Regulation (GDPR) was a big topic of conversation as the May 25 effective date looms.

As we’ve noted before, for a variety of reasons, Europe and the US have different perspectives on data privacy. Grant Thornton’s Lee agreed at Legalweek, noting a “majestic incoherence” in EU and US attitudes on privacy.

According to Banaschik and Chris Dale, part of this majestic incoherence includes fundamental misunderstandings of the GDPR itself.

“You can search the GDPR in vain for the word ‘citizen.’ It’s not there,” said Dale, noting that the GDPR language is “data subjects,” providing broader coverage.

Johnny Lee noted the most critical time for GDPR interpretation may be 9-12 months after the May effective date, when data protection authorities signal what’s important to them.

The panel discussed data strategy preparation, with Lee summing it up as: “Bring the right people to the table, assume the worst has happened, and work from there.”

AI and Robots in Legal

Another non-surprise at Legalweek was the continual discussion of artificial intelligence, with AI making at least somewhat of an appearance in just about every session.

Acceptance and optimism about the possibilities for AI seem to have overtaken concern about robots taking over the universe—and legal jobs.

“The robot lawyers are not coming to take your job—they’re a tool for you to do your job,” said Steve Kovalan of ALM Media.

“Human plus machine is better than human or machine,” said Dan Jansen of Nextlaw Labs in another session.

Of course, there was robot entertainment with the CARA v. EVA robot fight, and discussions of legal and policy considerations of robots.

In a session on mobile discovery and the Internet of Things, Jake Frazier of FTI Consulting highlighted the HIPAA aspects of robots dispensing medications in medical facilities.

“Inside the robot, there’s a database of all the drugs and who gets them,” said Frazier, noting that such systems should be designed to comply with the GDPR’s privacy by design provisions.

One doesn’t have to go to Europe for legal considerations of these privacy issues. McAndrew noted that the US Supreme Court is considering Carpenter v. United States, where the High Court is expected to issue a landmark decision on warrant requirements and the privacy of historical cell site information.

“Do you have a right to privacy in where you are and where you go, particularly over an extended period of time?” asked McAndrew, noting that the court will probably decide the case in June.

Kaplan noted how important data privacy considerations are for the corporate enterprise. In his research with corporate chief information security officers, primarily from Fortune 500 companies, 80 percent reported having bring your own device (BYOD) polices, and 63 percent believed that those devices contained sensitive corporate information.

When the discussion turned to sanctions for failure to preserve mobile data under Fed. R. Civ. P. 37(e), ESI Attorneys’ Twigger noted, with disapproval, cases where courts decline to find an “intent to deprive” under the rule, but still order jury instructions stopping just short of an adverse inference.

Educating for the Future

In another Legaltech session at Legalweek, David Horrigan of Relativity moderated a session on legal and technology education including US District Judge Xavier Rodriguez, William Hamilton of the University of Florida Levin College of Law, Daniel Martin Katz of ITT Chicago-Kent College of Law, Mary Mack of the Association of Certified E-Discovery Specialists (ACEDS), and Laura Norris of Santa Clara University College of Law.

On artificial intelligence in the classroom, Katz wondered about the overly broad definition of AI.

“I don’t want to be pedantic, but some of the stuff people say is AI would not meet any traditional representation of it,” Katz said.

“Legal consumers need to be educated as to what they need to ask for,” Mack said.

Judge Rodriguez predicted that law schools’ size will reduce by 20 percent due to an over-abundance of lawyers, but Norris predicted law schools will increase programs for non-JD students.

Hamilton predicted the role of technology in the legal field will change.

“Technology will be seen as the solution for litigation, not the problem of litigation.”

Other speakers urged caution in how we advance, with Stephen Allen of Hogan Lovells noting an important rule on innovation:

“Innovation committees are the worst thing for innovation.”