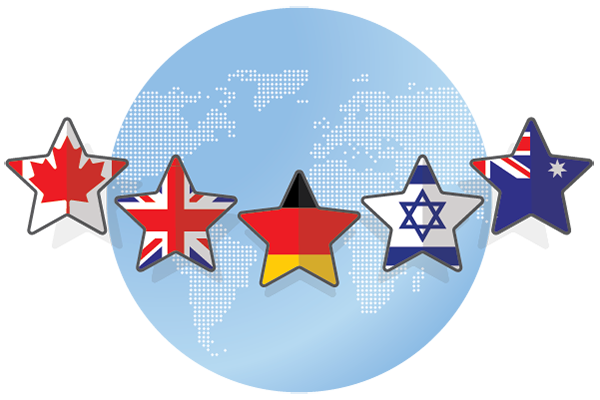 Despite the accessibility to amazing technologies that enable humans to be more connected with one another than ever before, in a lot of ways, the world has never felt more divided. Still, every two years, as billions of people tune in to watch a certain global sporting event, there’s an undivided spirit that ripples throughout the world as we cheer for our countries, overwhelmed with unwavering emotion. (I certainly can’t be the only one who cries every time during the ending of Miracle on Ice, and don’t even get me started on the 1996 US Women’s Gymnastics Team.)

There’s just something so utterly special and unifying about this event.

This year, as e-discovery providers and practitioners continue to expand their global footprints, this global event is also seeing some historic growth: 2018 has a record-breaking 92 countries participating, including six new countries compared to the last large, global sporting event in Sochi, as well as four new events (“mass start speed skating” is basically NASCAR on ice, so if you haven’t checked it out, highly recommend).

2018 is slated to be a huge year for legal technology, and even more, rapid international expansion. Here at Relativity, we recently announced our new Microsoft Azure data centers opening this spring in Hong Kong and Canada, and Germany coming in the second half of this year—adding to the UK data center we added in 2017. We are committed to make the e-discovery process as smooth and efficient as possible for our users in more than 40 countries around the world.

With Europe’s General Data Protection Regulation (GDPR) on the horizon, legal teams across the globe are preparing for potential privacy investigations, and will stay busy with compliance-related projects. With data security and privacy laws narrowing down, it’s going to be more important than ever for companies, and legal teams, to know where their data is and—more importantly—how it’s protected.

“Changes in legislation have certainly been making waves over here, and the data shows just that,” Rhiannon Pepper, associate account manager at Relativity in the UK said. “In terms of growth, the UK is actually outpacing the US. At Relativity, we saw our file size and workspaces grow 30 percent from 2016 to 2017.”

“The growth in the UK region specifically has been really exciting to watch,” Kate Hutchinson, marketing director at CDS, added. “It’s something CDS has kept our eye on for a while—with the complexities of data privacy laws across international borders, and especially with GDPR coming up this spring, discovery teams need to be really diligent.”

“Speaking of the GDPR, it might be fun to have a medal count for GDPR nations,” said David Horrigan, Relativity’s discovery counsel and legal education director. “The problem would be that because the GDPR covers businesses marketing to EU data subjects—whether or not the companies are in Europe—just about every industrialized country would be on ‘Team GDPR.’”

In case you missed it: England’s got a versatile collection of athletes

The International Data Corporation (IDC) estimated that Europe would compromise 23 percent of the total e-discovery market by 2019, and while a lot of that portion will be within the UK, Germany has numerous multinational corporations that operate their businesses worldwide: the top 50 German companies employ over 700,000 people within North America. And while many German entities collect, host, and process data all within Germany, there’s growing cross-border collaboration as legal teams are looking to help tackle the growing volume of ESI.

At Relativity, Germany’s file size today is more than three times what it was at the end of 2016, and there’s a significant need to get information translated and reviewed quickly.

“As data volumes continue to rapidly increase, we’re also seeing an upward trend with reviewing documents in multiple languages,” John Del Piero, vice president at Lighthouse explains. “Foreign language machine translation is improving, which is turning into a real game-changer in the legal field. Companies like LSI, Veritone, and Systran are making cross-border e-discovery much smoother and more efficient.”

Israel, with just nine million people, is continuously creating a remarkable number of successful technology companies, a lot of them focusing on some high-tech developments like cybersecurity, drones, and autonomous driving technology.

“Even though Israel is a world-renowned start-up and tech hub, the first phase of Israeli entrepreneurship was mostly focused on small companies exiting to larger foreign companies. In the wake of unicorn companies like Mobileye, Wix, Lumenis, and WalkMe (not to mention Amdocs and Teva), Israel is becoming home to big, scaled-up tech companies that have to build their own law departments,” Zach Abramowitz, co-founder of ReplyAll, explained. “As the number of sophisticated law departments grows, so will their e-discovery needs. The new scaled-up ecosystem will also create a larger group of local customers with whom legal tech companies can pilot their software before expanding to foreign markets. Israel has been noticeably silent when it comes to legal tech—I expect that to change.”

So, it’s no surprise that at Relativity, we’ve seen that market expand as well: from 2016 to 2017, their workspace count grew by nearly 30 percent.

Our friends to the north have typically had a different approach to e-discovery. However, many law firms and providers are finding more new and innovative approaches to handling higher volumes of data. A judicial opinion on predictive coding or technology-assisted review (TAR), in fact, has yet to be determined. Rather, e-discovery teams consult guidelines such as The Sedona Canada Principles or the Ontario Rules of Civil Procedure. From 2016 to 2017 at Relativity, Canada’s workspace count grew by over 60 percent, so there’s a huge opportunity for new technologies to help tackle increasing data volumes.

“Since Canada has a less litigious culture, we proactively look for ways to streamline the business process of e-discovery to manage costs and proportionality for our clients,” says Jennifer Johnson, vice president at Commonwealth Legal, the eDiscovery Division of Ricoh Canada. “This year, we’re particularly excited about the potential of Intelligent Review, and more recently, active learning capabilities within our software offerings.”

ICYMI: While you were sleeping, Canada was winning

In looking at the e-discovery market in the land down under, particularly since the TAR decision in late 2016, there’s been a clear upward trend toward technology adoption.

“We’re fostering and supporting a community in Australia that enables our customers to drive their businesses powered by technology,” Stuart Hall, Asia-Pacific team lead at Relativity explained. “Analytics usage has spiked over the last 24 months with 396 percent growth on consumption since 2015, and in the Relativity user universe, Australia is currently ranked #3 in the world.”

There’s certainly a common theme from e-discovery professionals around the world: data volumes are rising, and the technology we rely on to power our work is enabling us to work quicker and more efficiently, together.

So, the next time you see 1,218 drones light the sky in 5 concentric, circular shapes, remember that truly anything is possible. We’re looking forward to seeing how the e-discovery community continues to push the boundaries in 2018.

Kelly Velisek is a member of the marketing team at Relativity, where she specializes in customer advocacy.

DOJ Monitorships: What Happens After the Investigation