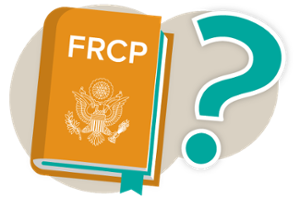 After a laborious multi-year process, the new e-discovery amendments to the Federal Rules of Civil Procedure went into effect on December 1 of last year. As the e-discovery bar braced for big changes, many overlooked an important aspect of the amendments.

The new Federal Rules may not apply to your case.

All in the Details

When U.S. Supreme Court Chief Justice John Roberts forwarded the amendments to the Federal Rules of Civil Procedure to the Congress, to Vice President Joe Biden (in his capacity as President of the Senate), and to then Speaker of the House John Boehner, some e-discovery practitioners may have missed some of the fine print in the April 2015 documents.

The foregoing amendments to the Federal Rules of Civil Procedure shall take effect on December 1, 2015, and shall govern all proceedings in civil cases thereafter commenced, and, insofar as just and practicable, all proceeds then pending.

Thus, if your civil action commenced before December 1, the new rules apply only if it would be “just and practicable” for them to apply.

If you think this provision is an archaic relic that is never used, you would be wrong.

Our research indicates courts have considered the issue of e-discovery sanctions under Fed. R. Civ. P. 37(e) in 27 decisions since the December 1 effective date. Out of those 27 decisions, four courts elected to apply the old version of the rule.

For instance, in McIntosh v. United States, No. 14-CV-7889 (S.D.N.Y. Mar. 31, 2016), a case involving a pro se prisoner alleging prison officials committed spoliation of videotape evidence, the court considered the U.S. Supreme Court’s order on the amendments and the applicable federal law, and went with the old rule.

“The Court concludes that it would fall short of justice and practicability to apply the new Rule 37(e) to Plaintiff's Motion,” the court wrote.

Despite the new rule’s explicit rejection of the Second Circuit’s holding in Residential Funding Corp. v. DeGeorge Fin. Corp., 306 F.3d 99 (2d. Cir. 2002), the McIntosh court chose not only to use the old version rule, but to also follow Residential Funding. The court wrote:

The Court is reluctant to reward Plaintiff's capriciously aggressive tactics by adjudicating his request under a more permissive standard. Nevertheless, because the Court takes seriously its obligation to afford special solicitude to pro se plaintiffs and because the Court does not think that justice would be served by inviting further motion practice surrounding the applicability of Rule 37(e), should Plaintiff initiate it, the Court applies the familiar law of Residential Funding and its progeny here.

One jurist giving thoughtful consideration to which version of the rule should apply has been U.S. Magistrate Judge James Francis IV (S.D.N.Y.), a noted judicial expert in e-discovery matters.

However, as other courts have done, citing the Supreme Court’s order and the applicable law, Judge Francis said he was applying the new rule because the new rule governed unless its application would be unjust or impracticable.

Francis reasoned that, because “the amended rule can provide sufficient relief in the current circumstances,” use of the new rule was appropriate.

Likewise, in Marshall v. Dentfirst, PC, No. 1:14-CIV-2421 (N.D. Ga. Mar. 24, 2016), the court considered applying either the old or the new version of Rule 37(e), but decided to go with the new version, holding that it would be “just and practicable” to apply the new version because it did not establish a new duty to preserve evidence and because the court would reach the same conclusion under either version of the rule.

Here at The Relativity Blog, one of our mottos is that we give friendly advice, not legal advice. For that, you should seek your own counsel. However, we can give you some useful guidance.

First, as our legal research indicates, do not assume the newly amended version of the Federal Rules of Civil Procedure apply to your cases. As this overview has shown, courts can—and will—apply the old version of the rules.

Of course, having said that, the research indicates also that most courts are now going to apply the new version.

Nevertheless, if you want to have your sanctions motion governed by the old version, your mission is clear: you’ve got to show it would be unjust and impracticable to apply the new rule.

There can be no doubt that the 2015 amendments to the Federal Rules of Civil Procedure will have an impact on e-discovery law and practice. However, there can also be no doubt that—despite the popular belief in our profession and in our industry—these new rules may not apply to your case.