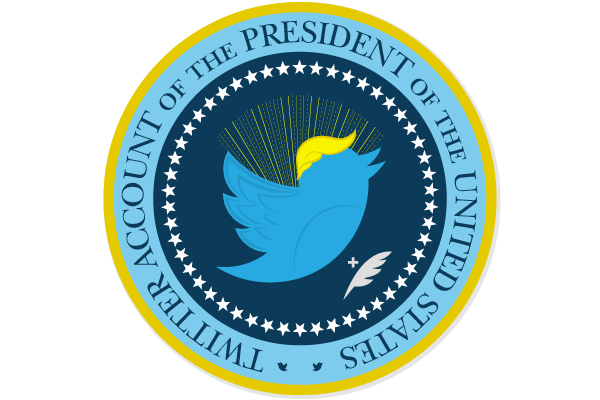 There may be no greater indication of the social-digital era in which we live than that we now have presidential hirings, firings, directives, and midnight musings conducted on social media.

However, even if social media are the new uncharted frontiers of digital communication, navigated by a president who—to the delight of many supporters and the horror of his detractors—conducts government business in late-night tweets, social cyberspace is not an unbridled Wild, Wild West.

There are legal limits to what one can do on social media—even if you’re the president. There are, after all, three branches of government, and one of them—the Judicial Branch—put the brakes on one of President Trump’s Twitter habits yesterday.

Twitter, a social media platform, has become a ubiquitous part of life in America and beyond. Founded in 2006, the site now has over 300 million users, including about 70 million in the United States.

Twitter users, including individuals, corporations, and even government organizations, such as the Federal Bureau of Investigation and the US Department of Justice, have Twitter accounts known as “handles,” where they post short messages known as “tweets.”

President Trump may be one of the most well-known tweeters. Not only does he have 52.2 million followers on his “personal” account, @realDonaldTrump (the “personal” part will become important shortly), his tweets have been a primary method of White House communication, featuring comments on everything from his firing of Secretary of State Rex Tillerson to his appearances on Fox and Friends.

However, to put some perspective on the president’s place in the Twittersphere, he doesn’t even make the top 10 in terms of Twitter “followers” (users who subscribe to see a user’s tweets). The top spots go to Katy Perry (108 million followers); followed by Justin Bieber (105 million); and—perhaps ironically—in third, former President Barack Obama (100 million).

Of course, we should note that President Trump also has an official account, @POTUS, which has 23.2 million followers.

Following other users isn’t the only way tweeters can interact. Users can show approval by “liking” a tweet, and they can “retweet” another user’s tweet, which puts that tweet on their own “timeline.”

Important for the Trump tweet litigation, users can also limit others’ activity on their accounts by “blocking” another user.

President Trump established the @realDonaldTrump Twitter account in March 2009, several years before he became president. Back then, he used the account to tweet on topics such as the latest firing in his reality television show, The Apprentice, or relationship advice to his fellow celebrities.

However, since his January 2017 inauguration, the president has used @realDonaldTrump to communicate and interact with the public about his administration, and the Twitter page associated with the account is registered to “Donald J. Trump, 45th President of the United States of America, Washington, D.C.”

Since Mr. Trump became president, he has operated @realDonaldTrump with the assistance of Daniel Scavino, White House social media director and assistant to the president. With Scavino’s assistance, the president tweets to announce official government business, often before those matters are announced to the public through official channels.

Important for the analysis here, the National Archives and Records Administration has advised the White House that the President’s tweets from @realDonaldTrump are official records that must be preserved under the Presidential Records Act.

Rebecca Buckwalter, Philip Cohen, Holly Figueroa, Eugene Gu, Brandon Neely, Joseph Papp, and Nicholas Pappas are all Twitter users who tweeted messages critical of the president or his policies in reply to a tweet from the @realDonaldTrump account. They were then blocked by @realDonaldTrump, and now cannot see his tweets via their original Twitter accounts.

The Knight First Amendment Institute at Columbia University is a 501(c)(3) organization with the stated mission of defending and strengthening the freedoms of speech and the press in the digital age through strategic litigation, research, and public education.

The institute tweets under the handle @knightcolumbia. Although the institute has not been blocked by @realDonaldTrump, it argues it desires to read comments that otherwise would have been posted by those who have been blocked.

Thus, the institute and the blocked individual sued the president in July 2017, seeking declaratory and injunctive relief, arguing that the president violated the First Amendment by blocking them from @realDonaldTrump in response to the political views they expressed.

The Knight plaintiffs named the president, Scavino, and then-White House Press Secretary Sean Spicer as defendants. After Spicer’s resignation shortly after the suit was filed, Knight substituted his successor as White House press secretary, Sarah Huckabee Sanders, and White House communications director Hope Hicks in his place, pursuant to Fed. R. Civ. P. 25(d). Because Hicks has since resigned—and because she was being sued only in her official capacity—the court ordered her dismissed as well.

In addition, because Sanders did not have control of the @realDonaldTrump Twitter account, the court ordered summary judgment in her favor.

However, because Scavino helps operate the Twitter account, the court refused to dismiss him—even though there was no evidence he was the one who blocked anyone. The theory is that, because the plaintiffs are seeking injunctive relief, future injury could result because there is always the chance he could block them in the future.

The president challenged the plaintiffs' standing to bring the suit, and the court rejected those arguments. The court then turned to “the First Amendment’s application to the distinctly twenty-first century medium of Twitter.”

After determining that the Knight plaintiff’s speech was, indeed, protected political speech under the First Amendment, the court analyzed the Forum Doctrine.

Is @realDonaldTrump owned or controlled by the government?

Citing the US Supreme Court in Cornelius v. NAACP Legal Def. & Educ. Fund, Inc., 473 U.S. 788 (1985), the court wrote, “A speaker must seek access to public property or to private property dedicated to public use to evoke First Amendment concerns.”

Applying this test, the court held, “Though Twitter also maintains control over the @realDonaldTrump account (and all other Twitter accounts), we nonetheless conclude that the extent to which the President and Scavino can, and do, exercise control over aspects of the @realDonaldTrump account are sufficient to establish the government-control element.”

Judge Buchwald also rejected the president’s argument that because @realDonaldTrump was established before he became president, it wasn’t a public forum.

After an analysis concluding the interactive space of a tweet from the @realDonaldTrump account constituted a designated public forum, the court moved to the issue of viewpoint discrimination.

The president argued the blocking of the Knight plaintiffs was permissible because the president retains a personal First Amendment interest in choosing the people with whom he associates and retains the right not to engage with any individual.

Although the court conceded that a public official does not lose First Amendment rights upon taking office, the court rejected the president’s argument.

Citing the Supreme Court in Minn. State Bd. for Cmty. Colls. v. Knight, 465 U.S. 271 (1984), the court said, “When the government goes beyond merely amplifying certain speakers’ voices and not engaging with others, and actively restricts ‘the right of an individual to speak freely [and] to advocate ideas,’ it treads into territory proscribed by the First Amendment.”

The court conceded that the president’s Twitter-blocking didn’t cause the Knight plaintiffs to sustain a terribly serious First Amendment injury. However, it said that didn’t matter.

Citing Six Star Holdings, LLC v. City of Milwaukee, 821 F.3d 795 (7th Cir. 2016), the court said, “To be sure, we do not suggest that the impact on the individual plaintiffs (and, by extension, on the Knight Institute) is of the highest magnitude. It is not. But the law is also clear: the First Amendment recognizes, and protects against, even de minimis harms.”

Importantly, the court rejected also the president’s argument that it did not have the power to enjoin his actions on Twitter.

“Stated simply, ‘separation-of-powers doctrine does not bar every exercise of jurisdiction over the President of the United States.’”

She continued her analysis by citing the US Supreme Court case of President Bill Clinton and Paula Jones, Clinton v. Jones, 520 U.S. 681 (1997), and said, “It is settled that the President is subject to judicial process in appropriate circumstances.”

Disputes over tweets may not be as important to the nation as the constitutional questions being raised over the powers of special counsel Robert Mueller vis-à-vis the president. However, the president’s Twitter litigation illustrates that the president’s power has limits, and other branches of government can control the actions of the president.

For the e-discovery-minded readers of The Relativity Blog, it’s important to remember that the lines between organizational social media and personal social media are often blurred. Donald Trump established @realDonaldTrump almost eight years before he became president, but the court held that—due to the way he used the account—it became, in essence, an organizational account after he was inaugurated.

Obviously, the biggest implications from the Trump Twitter litigation are for the many government readers of The Relativity Blog. However, most major e-discovery providers have Twitter accounts, and many of their employees do as well. It’s good to remember the words of Warren Buffett: “It takes 20 years to build a reputation and five minutes to ruin it.”

Of course, it takes far less than five minutes if you’re on Twitter.