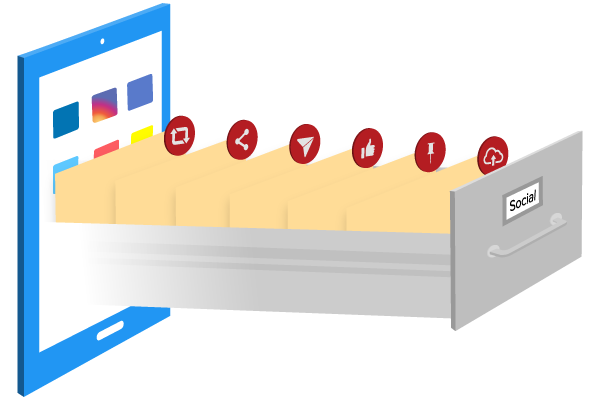 Relativity Authorized Partner Xact Data Discovery (XDD) recently published an insightful eight-part blog series around the technical and legal challenges of social media in e-discovery. The following is a condensed version of that series with the takeaways we found most helpful.

As the last election cycle made abundantly clear, social media is currently an influential, indispensable part of American life. And, as it worms its way ever deeper into our relationships, our professional activities, and our culture as a whole, its impact on discovery is growing as well.

Unfortunately, the nature, diversity, and volume of social media data present a variety of challenges for practitioners, both technical and legal.

In this blog post, we’ll explore some of those challenges and the ways they can be met, beginning with an overview of the different social media sources.

These five services—Facebook in particular—will be your most likely social media sources, though there are a wide variety of (much) smaller social media services competing for users (e.g. Google+ Snapchat, Reddit, and Tumblr).

Additionally, an increasing number of smartphone owners (72 percent of American adults) are also adopting the use of new messaging applications as an alternative to text messages or messaging through one of the major social media services. These applications come in both general purpose (e.g. WhatsApp) and auto-deleting (e.g. Wickr) varieties.

Each social media account for each individual user can contain hundreds or thousands of pages of materials in a mishmash of formats. For example, in one highly publicized case a few years ago (related to the end of the US-EU Safe Harbor program), a law student requested all of Facebook’s retained data on him and received 1,222 pages that included: posts, messages, and chat logs; log-on and posting times; records of his friends and connections; GPS data from photographs; some deleted materials, etc.

That student received those materials primarily in PDF format, but in their original formats, live on the Facebook platform, many of the files also would have carried their own metadata, such as fields documenting their unique identifier, item type, parent item, thread, recipients, author/poster, linked media, comments, and more.

Additionally, beyond all of the user-created and user-shared materials, and beyond all of the metadata associated with those materials, most social media services also generate their own records of and about user activity, such as IP address logs, which can be relevant in some circumstances.

Ways to Get It

There are usually a variety of options for the acquisition of social media materials for use in litigation. The most basic is printing out the material or capturing a screen image of it.

These kinds of features export a package of a user’s materials, which may be in a mixture of files and formats or may just be combined in a single PDF, depending on the platform and the materials in the account. This, too, is fast, simple, and cheap, but it can only be done by the account holder (or by someone with their credentials and consent). Additionally, the length and format can make the export challenging to sort through and separate once obtained.

An additional level up from the use of self-service export tools is the use of specialized forensic collection software. Just as you can forensically image a custodian’s computer using a specialized tool, you have the option of using a similar type of software collection tool to capture the contents of a social media account. Such tools capture the files and materials, along with their metadata and any linked content, and provide options for searching, sorting, and filtering.

While the publicly-shared materials on social media services can be collected directly by any party, the non-public materials in those user accounts can only be obtained through discovery.  In general, social media materials are discoverable under the same conditions and in the same ways as any other type of evidence.

As defined in Federal Rule of Civil Procedure 26(b), the scope of permissible discovery is:

Parties may obtain discovery regarding any nonprivileged matter that is relevant to any party’s claim or defense and proportional to the needs of the case … Information within this scope of discovery need not be admissible in evidence to be discoverable.

This standard applies to tweets, Facebook posts, or Instagram pictures the same way it does to more traditional sources like Office documents or emails. If it’s relevant, it’s discoverable.

The relevance requirement is an extremely low bar to clear under the Federal rules. Federal Rule of Evidence 401 establishes that evidence is relevant if, “it has any tendency to make a fact more or less probable than it would be without the evidence” and “the fact is of consequence in determining the action.” Thus, non-public social media materials are discoverable.

Despite the lowness of this bar and the relative simplicity of this standard, parties have frequently ended up in dispute over the appropriate scope of discovery of these materials, with requesting parties routinely making blanket requests for all materials and producing parties pushing back, asserting overbreadth, irrelevance, and privacy issues.

When traditional requests for production and direct scope negotiations have failed, parties have tried a variety of alternative tactics.

So far, the most commonly used mechanism has been in camera review of the materials by the judge. Some judges, however, have declined to take such relevancy evaluations upon themselves.

In the first few years of social media discovery, a number of litigants attempted to compel production of the opposing party’s social media account password to provide the requesting party with unrestricted access to review all non-public content in the account. Because this approach exposes extensive irrelevant (and private) materials, it is generally disfavored by judges and parties, and it has become uncommon in recent years.

Finally, some litigants have attempted to obtain non-public social media materials by subpoenaing those materials directly from the social media service providers. Unfortunately for the requesting parties, those attempts have run up against Title II of the Electronic Communications Privacy Act of 1986 (Pub. L. 99-508, Oct. 21, 1986)—also known as the Stored Communications Act—which establishes certain privacy protections for our electronic materials stored with third-party service providers, from both government intrusion and third-party access.

Unfortunately, in the context of social media evidence, the question of authenticity can be a challenging one. Social media platforms, like all internet sources, are still very new, legally speaking, and they are constantly evolving in form and content.

The process for establishing evidentiary authenticity is laid out in Federal Rule of Evidence 901. To establish authenticity, “the proponent must produce evidence sufficient to support a finding that the item is what the proponent claims it is.” The rule goes on in subpart (b) to provide a non-exclusive list of ten example ways that authenticity might be shown for various types of evidence.

Subpart 901(b)(4) says that “distinctive characteristics” of a piece of evidence can be considered to establish its authenticity. For social media materials, distinctive characteristics might include (but are not limited to): materials appearing on a page that is in the alleged author’s name; relevant individuals appearing in included pictures; relevant topics being discussed; distinctive slang being used; the appearance of relevant names or nicknames; the times or locations on shared posts or photos; or, the IP address of the device from which posts were made. Basically, to quote Judge Grimm’s shorthand for this rule: “If it looks like a duck, waddles like a duck, and quacks like a duck, it must be a duck.”

Such situations are governed by Federal Rule of Evidence 104(b) Relevance That Depends on a Fact, which requires that “proof must be introduced sufficient to support a finding that the fact does exist.”

While parties and their attorneys may be struggling with social media, courts are very comfortable treating it like any other source: if relevant, it needs to be preserved and produced; and, under no circumstances should it be intentionally altered, deleted, or hidden.

Just how reliable are individuals’ own, real social media posts? Do people really create accurate, spontaneous reflections of themselves and their lives? Probably not, at least not entirely.

In a 2012 paper published in the Vanderbilt Journal of Entertainment & Technology Law, Kathryn R. Brown distilled recent research on social media psychology and found that users selectively screen photos to present themselves as “attractive” and “having fun,” and that they tune their personae to come across as “socially desirable,” “group-oriented,” and “smiling.” Meanwhile, “individuals are unlikely to capture shameful, regrettable, or lonely moments with a camera.”

So, to at least some extent, we all generate our own mildly “fake news” about ourselves, editing our comments and curating our images to try to appear as we wish to be seen rather than as we may be. This does not mean that there may not be reliable, valuable evidence to be had in social media materials but, rather, that we should consider such materials with this in mind and be conservative in the inferences we draw and the assumptions we make. As one judge put it:

The fact that an individual may express some degree of joy, happiness, or sociability on certain occasions sheds little light on the issue of whether he or she is actually suffering emotional distress.

While the relevance of a posting reflecting engagement in a physical activity that would not be feasible given the plaintiff’s claimed physical injury is obvious, the relationship of routine expressions of mood to a claim for emotional distress damages is much more tenuous.

Last month, XDD presented a live webinar on social media—in conjunction with ACEDS – called “Gone Viral – Social Media in eDiscovery.” A recording of the program, including the Q&A that followed, is available for free here.