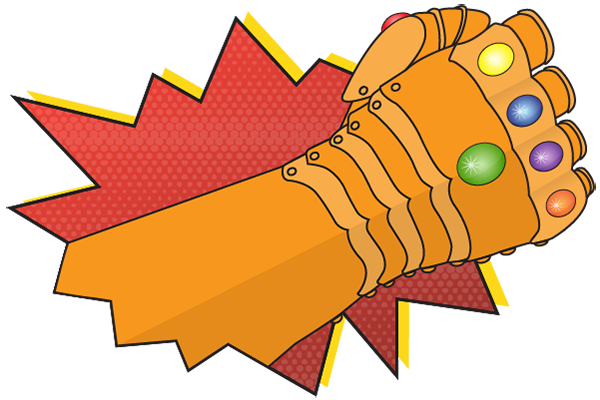 If you are a legal technology guru who also happens to enjoy superhero films, then the upcoming release of Avengers: Infinity War should have your heart buzzing faster than Captain America on a dose of Super Soldier Serum. The culmination of 18 films from Marvel Studios, starting with 2008’s Iron Man, this latest Avengers installment builds on the heroes, villains, and technologies that we’ve been experiencing for a decade in the Marvel Cinematic Universe (MCU).

Without getting spoilery, this quest in the MCU revolves around the big baddie Thanos collecting powerful items called Infinity Stones, each with their own strengths and attributes. These six stones bring a unique history, and when connected through a shiny glove known as the Infinity Gauntlet, they provide exceptional abilities to the wearer.

While they don’t have world-ending consequences, e-discovery projects present their own challenges. Your team’s ability to vanquish each foe encountered is dependent on individual tools in the Relativity ecosystem. Just like the Infinity Stones, when these tools are combined to form a connected experience, your team is imbued with nearly unstoppable power. Relativity has made you a superhero! (We’ll just gloss over the whole “potential to destroy the universe” aspect of this analogy, OK?)

So let’s take a quick jaunt into the Relativity Platform Universe (the RPU?) and explore what a fictional e-Discovery Gauntlet would entail.

The blue cube known as the Tesseract was the star MacGuffin in 2012’s The Avengers, providing the ability for villainous Loki to travel through space. Those in control of what is known as the Space Stone—found inside the Tesseract cube—gained instant access to any location throughout the universe. As we discovered, location matters, especially if you have matters to attend to in various locations across the globe.

Thanks to privacy and data protection laws, you’ll want to make sure your Gauntlet features RelativityOne, with data centers in the US, UK, and Hong Kong, plus Canada and Germany coming later this year. Additionally, revealed in 2011’s Captain America: The First Avenger was that the Tesseract also provided advanced powers and weaponry, assuming its possessors understood how to use it correctly. Our Relativity Authorized Partners fit this role, leveraging their knowledge to provide expert service and support in your e-discovery conquest.

The next Infinity Stone to make an appearance debuted in 2013’s Thor: The Dark World. Disguised as a red, floating liquid known as the Aether, it was acquired by Malekith in an attempt to cover the Nine Realms in darkness. The Reality Stone contains the power to warp reality at will, granting that owner immense abilities they might not normally have. It was not an easy foe for Thor to tackle, and he relied on abilities provided by his love interest Jane Foster, astrophysicist Erik Selvig, and brother Loki (still a bad guy) to ultimately prevail.

Often we encounter challenging e-discovery circumstances that require extra abilities to make Relativity do what you want it to do. Featuring integrations and customized applications built by Relativity and our community, the Relativity App Hub is a key addition to your e-Discovery Gauntlet. Leverage Relativity’s APIs to build and brandish your own applications just as Thor wields his hammer, Mjölnir. Alternatively, weave together tools built by our developer partner network … which is sort of like a web.

Sometimes you just want to amplify your power, focusing your energy in an efficient way. For Ronan the Accuser, the antagonist in 2014’s Guardians of the Galaxy, this quest was focused on obliterating the planet Xandar by leveraging the Power Stone. He really didn’t like those Xandarians (bad guys always have some reason, right?). Thankfully, the Star-Lords of e-discovery can call upon RelativityOne Analytics and Assisted Review to amplify efforts in a positive way that doesn’t involve the extinction of an entire planet.

Whether you are dealing with the likes of Black Widow’s dump of all SHIELD’s files in Captain America: The Winter Soldier or need to visualize the unpredictable sightings of the Incredible Hulk in Brazil, you’ll get to the facts faster through data analytics and machine learning. Don’t worry if Secretary Ross is asking for answers; you’ll be able to provide accurate and defensible results on a tight deadline. Your big problems are suddenly reduced to something more manageable—just like Ant-Man!

What could prove to be the greatest threat to our heroic Avengers may be the reveal of the Soul Stone, which hasn’t yet been introduced in the films leading up to Infinity War. (Or maybe it has and we just don’t know it yet.) This feeling of the unknown is unsettling, especially if situations don’t quite appear as they seem.

Investigations personify these situations, with unknown risks and undiscovered insights around every corner. RelativityOne Early Case Assessment & Investigation is the Stone to add to your Gauntlet here, allowing you to cut through the noise and prioritize the information you have available. And when that unknown does appear, you’ll be in a better place to act on what you find, avoiding your own personal Ragnarok.

2016’s Doctor Strange introduced us to the Eye of Agamotto, containing the Time Stone and its ability to control the flow of previous and future states. He used it while studying at Kamar-Taj to restore pages from ancient texts that had been removed by former student-turned-villain Kaecilius. This helped the Sorcerer Supreme piece together the facts to discover the weakness in his opponent.

In the galaxy or in your case workspace, timelines become fluid as new information complicates our understanding of the truth at hand. Relativity Case Dynamics helps make sense of the key players, the associated facts, and their connections by giving you control over the timeline of your matter. And when the time comes for you to confront Dormammu, have key passages available thanks to Transcripts. He’ll know you’ve come to bargain.

Our Gauntlet wouldn’t be complete without the Mind Stone, first seen in The Avengers but later revealed in 2015’s Avengers: Age of Ultron to be inside Loki’s scepter. In the films, it granted the user powerful mental abilities, such as increasing the intelligence of those capable of utilizing it. Eventually, the Stone and its superhuman powers were implanted into the forehead of Vision, creating an invaluable ally for Earth’s Mightiest Heroes.

While new e-discovery challenges appear every day, you probably don’t need full mind control abilities. Still, being able to tap into the intelligence and experience of others is valuable, and that’s where the Relativity Community site comes into play. Powered by your peers who use Relativity, tap into workflow answers, best practices, educational opportunities, and technical resources without having to worry about your lack of telekinetic powers.

It’s not easy to organize data and find the truth, especially if you have to sort through the amount of clutter found on Sakaar. Utilizing the Relativity connected experience to battle your e-discovery challenges will make the task more manageable, efficient, and insightful. You’ll be hooked on a feeling before you know it!

Steve Tanner is a member of the marketing communications team at Relativity, coordinating our social media and online community initiatives.

7 Binge-Worthy Documentaries for Every e-Discovery Fanatic

The 5 Love Languages & e-Discovery: What Language Do You Speak?